Of Castles And Hairy Beasties

Much to UNIT's relief, things have been relatively quiet lately. That is, until the Doctor reads about strange goings-on at a castle in Scotland. While touring this castle, Jamie comes face-to-face with an old foe and things get very personal as someone close to him becomes threatened. Second story in the Time With a Twist of Tartan series.

Not my characters, except for Kathryn and any minor OCs that pop up. This story and the series it's part of are written for entertainment purposes only. Once again, it's unbetaed, so any mistakes are mine and mine alone. This story is set about 3-4 months after the end of Waylaid In London. Some of the information on Glamis Castle is fictional and for storytelling purposes only. I like to research while using actual locations so a story will seem at least a little accurate, but sometimes I will take a little creative license. 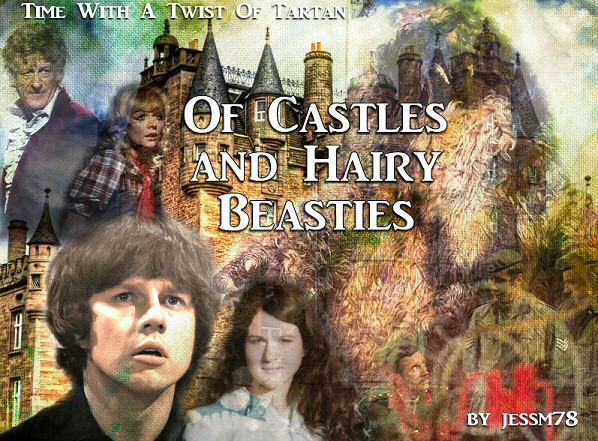 “And through here is Duncan's Hall … Please keep up, everyone.”

Nigel Thorne did all he could to keep from rolling his eyes and shook his head. When was this bloody tour going to end? He was here as a favor to his wife, Debbie. They hailed from East Anglia and were here in Scotland on holiday. Nigel had never been here before. He admitted the scenery was quite impressive, but he really had no interest in such detailed history of castles and such. Truth be told, he'd be more content to remain outside and take photographs than follow some stuffy old guide and listen to his dull, tired spiel of what previous inhabitants ate for dinner four hundred years ago.

Debbie owed him big for this. Next attraction they would visit would have a pub where he could take a load off and lose himself in a dram or two of whisky.

As they strolled through this hall, he hadn't realized he'd started dragging his feet until he heard Debbie clucking her tongue at him. “Come on, Nigel,” she hissed, a look of obvious disapproval on her face. “At least pretend you're mildly interested, yeah?”

Nigel snorted. Here he was, thirty-six years old, and his wife was talking to him as if he were six. Perhaps he was being a little unreasonable, but he sorely needed a drink and couldn't wait for this tour to be done and over with.

“As I previously mentioned, the Earl was known as an expert hunter,” the guide's voice suddenly cut through his reverie. “His most notable 'prizes' are all on display here.” The older man made a sweeping gesture to the many animal heads mounted high up on the wall, including deer and boar. “Not only did he hunt and bring back animals from here in Scotland, but from many other places as well.”

Right, sure. Bla bla blah. Nigel was about to go back to his obsessive 'I-need-a-drink' mode until something made him stop in his tracks.

The hall made a slight turn to the right and there in the corner stood a large, stuffed … hairy animal of some sort. What sort of creature was that? It was tall, standing on its hind legs, and had a profuse covering of brown hair all over its body. Could it be a bear? Possibly, but it didn't look like any bear he'd ever seen.

The more he stared at it the more mesmerized he grew. He couldn't say why, exactly. Perhaps he was just so mystified by its origin. Where had it come from? The guide had said the Earl was an avid hunter, or at least that's what it sounded like. Now he wished he'd paid more attention.

“Nigel!” Debbie's voice suddenly called. “Come on! Keep up with the group!”

He briefly turned his head to find her way ahead of him and their group even further ahead. Had he really been standing here that long? “Oh, yes, sorry.... I'm coming. Be there straight away,” he muttered absently.

He'd turned back to regard the strange creature one last time, his brow furrowing in confusion before finally turning to leave. He was nearly halfway out of the hall when he suddenly felt the sensation of someone – or something – tapping him on the shoulder.

Turning his head, he found no one there. It was just that stuffed creature, standing motionless. Although he couldn't see its eyes it was as if it were staring at him. He was hypnotized. Deep down a part of him knew this was silly and he really should get back to his wife and the rest of their group.

But he couldn't. That thing was keeping him here.

As he stared at it, he saw its features begin to change. A set of two large, dark eyes suddenly appeared. Feeling the hairs standing straight up on his arms, Nigel licked his lips nervously. Something was not right here.

He really needed to leave. But he couldn't.

He could hear his heart throbbing, the pounding echoing in his ears. Behind that he could make out a faint beeping sound which seemed to get steadily louder.

He finally turned, trying to locate the source of the sound. At first he wondered if it could have been a smoke detector of some sort, or some other alarm.

“Unngh!” he cried out in frustration. Where on Earth was it coming from?? Why wouldn't it stop? Was someone playing a trick on him?

“All right, that's it. Show yourself,” he said, trying to sound tough despite his trembling voice. After a moment had passed, he thought he located the source and began heading toward what looked like a sealed up section of the castle, perhaps a room that was no longer being used.

He slowly headed toward it when he suddenly heard a faint sound of footsteps echoing his own, as if someone were creeping up on him. So that was it, then – just a prank.

His scream died as the stuffed, hairy creature – which was now very much animated with glowing eyes – lunged forward, grabbing him by his throat. Gripped by white-hot pain as his consciousness slowly ebbed away, he somehow managed to catch sight of the source of the beeping sound: a small, metallic ball slowly rolling out from the opposite corner. It landed just next to him and was the last thing he saw before everything went black …

christinesangel100, fancyadancebrigadier, xlander27, Jaybird314, and KrozJr as well as 3 guests left kudos on this work!