The long-awaited Caribbean Rim is here!!!!!! Madoka Kaname, Sheriff of Mexico, fights with her friends to protect the Caribbean Sea from any threats that might arise, by using giant robots of course. This is the sequel to "Madoka in Mexico" and "My Big Fat Madoka Wedding" we've all been waiting for! 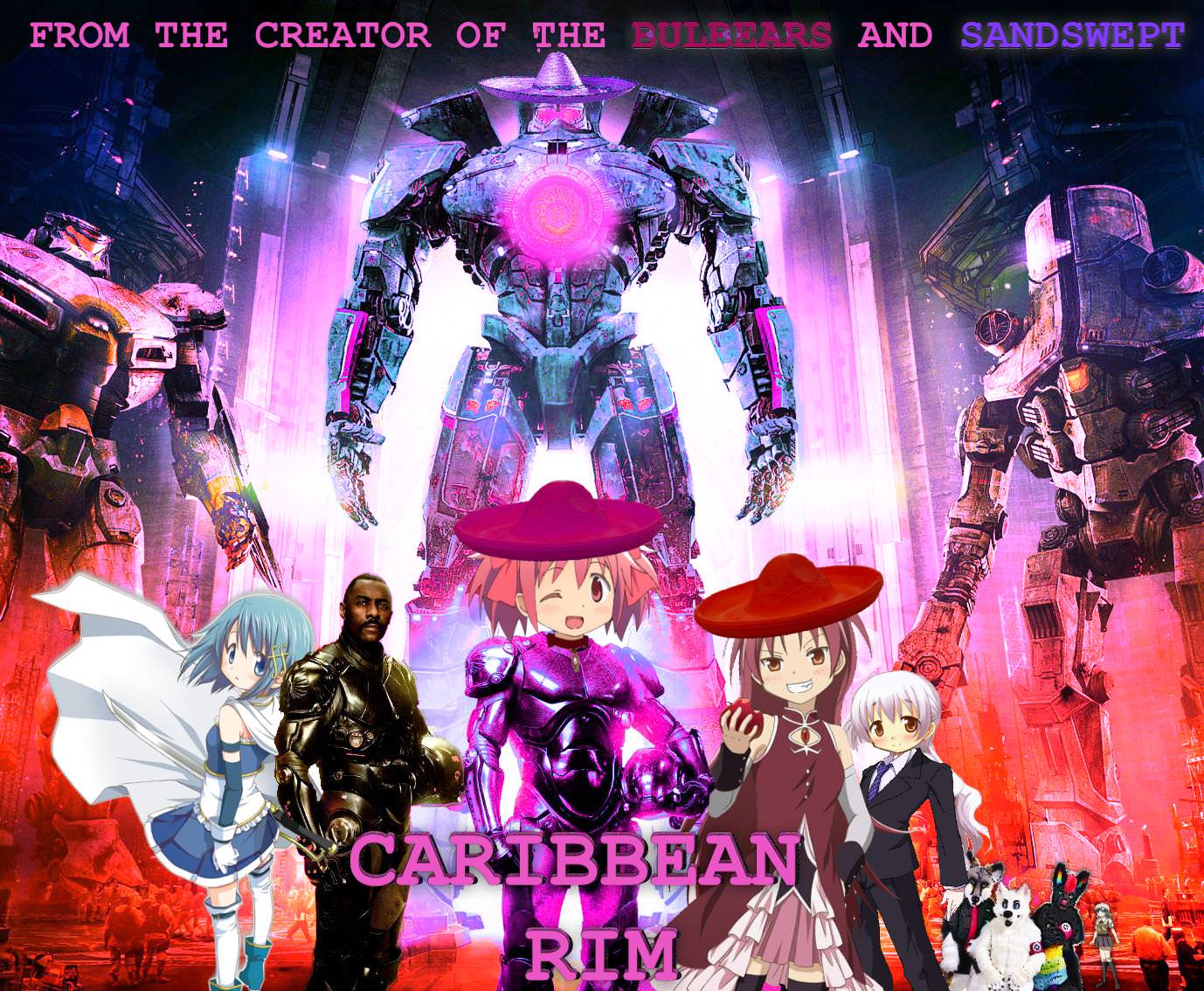 Julia heard the taps on her door.

And then the scratches.

There was no more time to gather her things. She dropped the photograph of her mothers from her hand and sprinted towards the back door.

It was all she could do in this moment.

As she exited the door and leapt over her fence, she could hear the crashing of furniture and deep-throated yells from the voices behind her.There was no way she could stop now. Not if she wanted to live.

Her heart raced, just as her feet did the same. How could such a world come to Julia’s life... just one year ago it was unthinkable that this small Mexican teen would be doing anything except studying for her college entrance exams and pining over that boy Enrique in her sociology class. Could anyone have plausibly guessed she’d be running through the streets for her life, dressed hastily in gym shorts over her pajamas, carrying her entire life in the contents of her backpack?

Not Enrique, that’s for sure.

His entire family had defected the moment the siege broke and Tempoal had been taken over.

Julia never knew she could even run this fast, for this long. She was certainly no athlete, and her weight wasn’t exactly optimal after long nights of stress eating before tests. But she was still going. She had cleared the neighborhood, headed the first place she could hide out for long enough for her to think up a plan.

She needed to get out of the city. Maybe find her Aunt Lolita. But she didn’t know where she was, or how to get there. Public transportation had been shut down for a week, and all vehicles in or out were being thoroughly checked anyway. Maybe there was an underground group funneling fugitives out of the city. That’s what she needed to find out.

Just as she escaped from her pursuers, that was. If she took the next corner around the street and cut through the inside of the local library, she’d--

Two men slid out in front of her from a nearby floral shop and stopped her dead in her dash.

They were male, but they were not men.

“Gotcha right there, little one,” one of them said.

“We hit the payday, eh?” the other asked to the other.

Julia tried to escape but the two lunged at her and grabbed her arms.

Moments later, armed soldiers, likely the same ones from her home, approached from behind. They were all ferocious, hulking beasts, made in the image of foxes or wolves, and wearing full combat armor as if they expected her to put up a real fight. Their leader, wearing an officer’s uniform and adorned in medals, stepped out in front and gave a toothy grin/. His pelt was bright red, and his narrowed eyes glowed green.

“Julia Cortez-Hernandez,” he said. “You are in violation of the sovereignty of the Furry Liberation Army. You are under arrest. Come with us.” His glare was menacing, almost hungry. He was surely Raxus, the Furries’ top political enforcer here in Tempoal.

They had captured after all.

She wouldn’t escape this time.

It was only minutes before she, like any others, ensnared by the Furries, was brought out towards Red Square. Once, it had been the bustling social center of the city. But now, it was the destination for the Furries’ devastating public executions.

This would surely be Julia’s final moments.

She was dragged along the street, empty save for the occasional Furry Guardsman. Red Square was only two blocks away, and she could already hear the screaming masses, cheering on the latest deaths.

“Don’t worry, little one,” said Raxus. “Your terror will merely add to the spectacle. Your death will be championed in the hearts of the many.”

“Nah,” a voice said, coming from above them.

There was a sombrero-wearing, pink-haired woman hanging from a light pole with one of her hands, and pointing at the group a pistol with a flower-engraved barrel.

“Nah?” Raxus scoffed. “And you are you to make such bold-faced comments to me?”

Sheriff Kaname dropped from the light pole, kicked Raxus in the face, and fired her pistol at the soldiers surrounding Julia. Her gun shot out pink beams of light that pierced through their armor and promptly killed each of them. Smoke rose from their collapsed bodies.

“Violence and gruesome imagery, this soon into the story?” Sheriff Kaname asked. “I don’t know about that, but I’m just waiting for the giant robots.”

Julia was stunned. So stunned she could hardly move, let alone speak.

The Sheriff of Mexico-- er, the Caribbean Sea now, apparently, had come to her tiny backwater town to save her.

Sheriff Kaname noticed Julia’s tense emotions and tilted her sombrero up. “Ain’t you got a voice, missy?” The question was certainly worded strangely...

She had heard of Sheriff Kaname’s exploits over the past decade or more; Julia was barley in grade school by the time the woman in the pink sombrero had saved Mexico from Kiiko Kawakami, the monstrous psychic better known as Neo-Diablo by locals, but word had spread across the country to the point that she was encased in legend.

And the myths, Julia realized, were proving to be true.

“Okay, so silence is the way people greet each other around here, I guess...” Sheriff Kaname dug through the pockets in her frilly dress an pulled out a glowing pink-gold medallion. “Here. If you ever need help, just use this. I’ll always be watching over you. Metaphorically, not literally. Literally would be weird. And I’m not weird.”

Julia took the medallion. What was it?

“Take care,” said the woman. She took a huge leap away, and was gone.

Was Sheriff Kaname really here to save her city? Or was this a fortuitous coincidence as the result of mishaps and happy accidents?

She... really hoped it was the former.