Johnny realizes his feelings of jealousy might be misattributed. 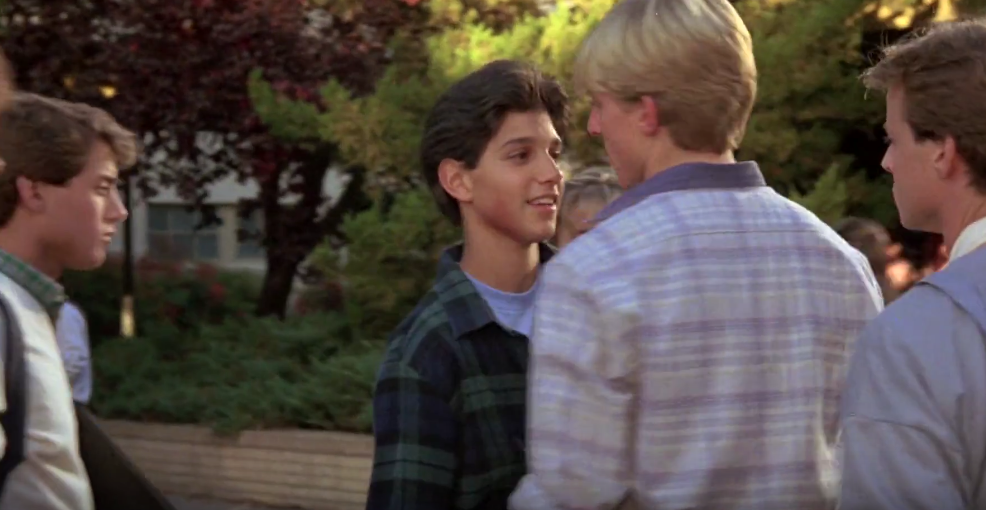 I wonder what keeps us so high up
Could there be a love beneath these wings?
If we suddenly fall should I scream out
Or keep very quiet and cling to

There was always a distinct tenseness you felt when you saw them together and for a while, you attributed it to losing a girl that you loved so much. Every time you'd see them holding hands or giving each other kisses in the halls at school, the same feelings would start again and you'd try to ignore them. You weren't exactly sure when those feelings started coming from a different source. You never liked to think about that too much, for obvious reasons. Still, you couldn't get rid of it, and the more you tried the worse it became. You couldn't pinpoint where it started but whenever that feeling that would well up in your chest and made you feel like you might throw up, you knew it wasn't from seeing Ali.

That made it so much worse.

No logical explanation for it all and those more you ignored it the more pressing it became until you found yourself staring at him. You tried to make it look like an accident, or like a method of intimidation, but he could see right through you, like he already knew all your thoughts and secrets, taunting you every step of the way.
Why else would he smile at you like that?

The night after Halloween, your body was still aching from that chop to the sternum and you couldn't see out of your left eye that well. You could hardly believe it when you saw him walk through the doors of the dojo again, this time with his little oriental friend that beat you and your friends bloody. As usual, all you could do was look at him until your attention was suddenly pulled elsewhere. He looked nervous for once and it made you smile involuntarily. You stand next to them as the adults talk, and you breathed in a little deeper when you recognized his smell, while you looked at him from the corner of your good eye, and thought about how good he looked all banged up like that. You didn't even care anymore, you figured you might as well let your thoughts get weird if it means you can resist touching him all the more. His little guardian angel talked to your sensei about fairness and equal odds, even had the nerve to demand you and your friends leave him alone. You figured it wasn't your fault for beating on him, at least last night. The little brat liked to instigate fights and then run away, although you were more than happy to chase him down every time. You agreed to it anyway, agreed to leave him alone until the next time you would get to properly kick his ass.

Could it tremble stars from moonlit skies?
Could it drag a tear from your cold eyes?

I live on the right side, I sleep in the left
That's why everything's got to be love or death


When you saw him at school the next day, he was even worse than usual. You spotted him and your ex-love canoodling by his locker like they always do, and when he suddenly started to walk your way, your chest got the same feeling of oppressive tightness it always did when he got too close. He was still smiling like he could tell what you'd been thinking and for a second you considered this a real possibility. Your eyes didn't even go to her this time, not even when she purposely brushed your body with hers as she walked past with him by her side. No, you were too busy looking straight into those dark little doe-eyes that were only inches away from yours for those few glorious seconds. His smart-ass remark made you want to grab him and pin him to the ground, steal that smile off his lips with your own mouth.

But you couldn't. You knew you couldn't. So you just watched while he walked away with his blonde princess in tow and you still couldn't keep your eyes from lingering on him from across the courtyard, watching still as they talked and kissed on each other some more until he's finally alone again. You however, were not, so what you had in mind for him would have to wait for now.

But life did not want you to have your way, not even a little bit, and once again that little doe-eyed deer is saved by a nearby adult like some sort of black magic destined on frustrating you all the more. You couldn't help but admire his methods, he was sneaky and even more self-assured when he knew he had you cornered, even had the guts to reach out an touch you, as your breath was nearly knocked out of you by that feather-light pressure on your shoulder. You were starting to think the universe had some sort of personal vendetta against you.

The next time it happened, you were alone.

It was a typical hot California afternoon and you were once again, late to third-period class. When you closed your locker door and gathered your books in your arms, his voice nearly startled you enough to make you jump.

"Hi." For a moment you were a little stunned. What the hell was this? He piped up again when you didn't respond at first, ever so stubborn for attention it seemed.

"It's not very nice to ignore people, you know. Unless you would really prefer to just stare at me all this time."

You could feel your eyes go wide and you tried to fight the expression on your face with your usual sneered frown that you used only for him, "What?" That little prick, taunting you as always, maybe you could refresh that black eye you gave him last week, he looked better bruised up anyway, and you could imagine what he'd look like with your hickeys all over his neck, little marks littering his stomach and his thighs, and if it would sound as good as it did in your head every night.

You were so caught up in your thoughts of him that you didn't even realize he'd been stepping closer all that time. Little by little, until your noses could have touched if you only leaned in a little bit more.

Your voice sounded so quiet you almost felt embarrassed by it. "What are you doing?" He inched even closer and you were sure he could feel your heart beating so strongly in your chest.

"I have noticed, you know." He was smiling as he said it and you really didn't know what to do with the feeling that came over you just then.

You debated just punching him in the mouth so hard he would have undoubtedly lost a tooth, and walking briskly away to where you were supposed to be in the first place. Just punch him and walk away and never as much look in his direction again. As your eyes went to his mouth, you couldn't help but notice that his front teeth were crooked.

You couldn't move, he had you pinned now with nowhere to go. You could have shoved him off of you and ran like you were planning to, but as usual, he was quick enough to trick you.
It felt better than anything you ever imagined on your own and you closed your eyes in spite of yourself. After a few seconds he pulled back, and any anger that even managed to remain was just as soon dissipated by that beautiful smile he gave you. You still couldn't work up the nerve to say anything to him yet. Instead, you dropped your books and squeezed him so tight you thought for a second you might break a rib, and kissed him again before he could make another snide remark. Although, as soon as you felt him smile against your mouth, you knew that he didn't need to say much of anything anyway.