Sam's life takes a turn in an unexpected direction when she's faced with an unplanned pregnancy. The decision to keep the baby and raise it on her own will alter her life forever. Relationships are put to the test, especially the one between her and Jack. She doesn't know what to expect from him and he surprises her at every turn. 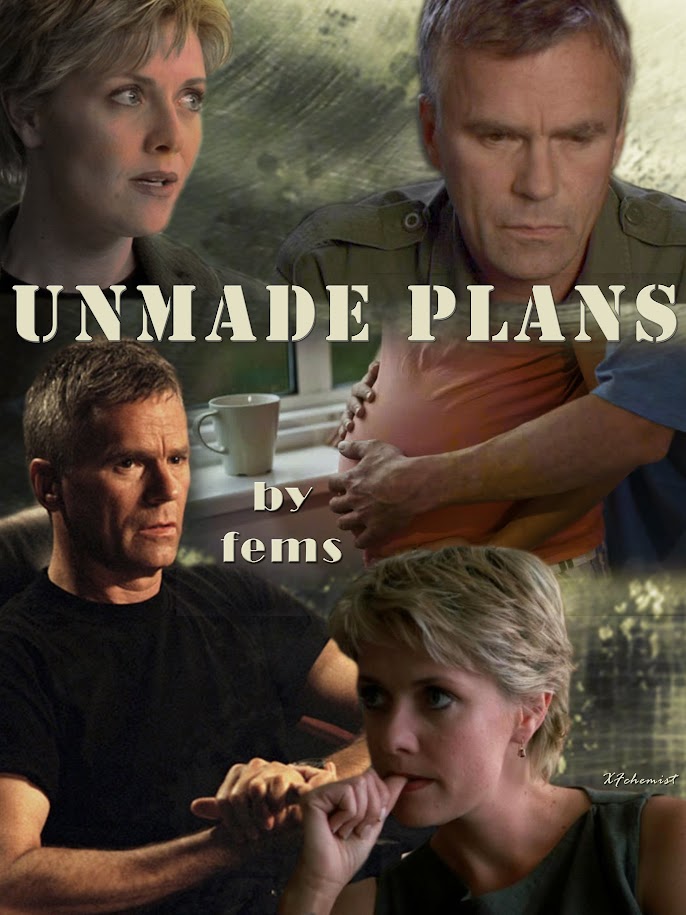 Disclaimer: see profile
A/N: The awesome Amara D'Angeli has been my beta for this fic, but any mistakes are my own. Thanks to MtheT for the title suggestion and XFchemist for the lovely cover art.

Sam walked into the diner and headed over to the Colonel's table. She'd hoped to beat him to it, give herself some time to prepare and relax. His truck had already been parked near the entrance when she arrived, though. She smiled in greeting when she neared him, aware that he'd spotted her the moment she entered the parking lot from his place at the back, near the window.

She slipped off her coat and slid into the booth opposite him. "Thank you for coming, Sir."

He made a dismissive wave with his hand before scooping up a piece of omelet from his plate. "Hope you don't mind I started on breakfast already. Coffee?"

"It's fine," she said, shaking her head at the approaching waitress. "I already ate."

"Actual breakfast? Because coffee doesn't count as a meal, you know."

She smiled at his teasing. "Yes, Sir."

He placed his fork on the plate and gave her his full attention. "So, why are we here on this fine Saturday morning, Carter? Don't get me wrong, the food is good and the company's not bad either but we don't usually... do this."

"You already said that," he said, as he reached for his coffee.

Sam grimaced, searching for the right words and looked down at where her hands rested in her lap. It wasn't going to be easy, she knew that, but it was a hell of a lot harder now that she was actually sitting across from him. Taking a deep breath, she steeled herself and decided to just come out with it, "I'm pregnant, Sir."

His hand froze midair and his dark eyes scrutinized her face. The expression on his face didn't change and there were no other outward signs of how he was taking the news. Finally, he cleared his throat, "Is this good news or-"

"Well, then I believe congrats are in order, Carter." He set the coffee cup on the table and gave her a tight smile.

She flushed and played with the hem of her shirt. "I'm… it wasn't planned."

"Doctor Fraiser thinks the naquadah in my blood and some medication I was on interfered with the Depo Provera." Sam wasn't sure why she was trying to explain herself, it was just such an uncomfortable situation and she had no idea what else to say to him. If their roles were reversed she'd feel… well, she wasn't sure what she'd feel, but it wouldn't be anything positive. Betrayed, maybe, even though they had no claim on each other. He still wore the infuriating blank mask he always wore when he was schooling his features, but she supposed that in itself was a sign of his discomfort – and hurt? "Anyway, she confirmed the pregnancy and I've decided to keep the baby."

"And will the baby's father also be involved?" He asked, taking a sip of his coffee.

The question surprised her. It wasn't like him to ask her personal questions and certainly not about her love life, but it seemed he genuinely wanted to know. Sam wasn't going to explain the finer details of the relationship she had with Anders, a fellow physicist she'd known for years and would occasionally meet up with to catch up and… unwind. Besides him and Janet, the Colonel was the only one she'd told about the pregnancy and she knew there would be more questions once word got out. That didn't mean she was required to divulge her personal affairs, though. "Um, no. Not really."

The Colonel took another sip of coffee and nodded, "Ah."

"He supports my decision, but isn't really interested in having children."

"He could change his mind," Colonel O'Neill said, again surprising her.

She smiled at his attempt to sound supportive and shook her head. She'd known Anders for years and was well aware of his views on relationships and children. That was one of the reasons they'd enjoyed such an uncomplicated relationship of sorts. "Thank you, Sir, but he won't. And I'm okay with that."

The Colonel drummed his fingers on the table, before pushing his plate to the side. Clearly, the topic of conversation had made his appetite disappear. "So," he winced and glanced around for any eavesdroppers, "you know this means no more gate travel, right? Pregnant personnel-"

"I know, Sir," she said, interrupting him. He looked almost apologetic telling her, but it had been close to a week since Janet confirmed her suspicions and that had been enough time for Sam to accept the consequences that came with her decision to keep the baby. "That's why I'm telling you now. I've already started a list for possible replacements but I don't know if you'll be able to find someone before our… I mean, SG-1's, next mission."

The gentle tone was one he hardly ever directed at her and it made her swallow hard. "Thank you, Sir, but I'll most likely be assigned to lab work until my maternity leave starts." And she had no idea what she would do once that maternity leave was over. Could she go back to SG-1? Risk her life on a weekly, if not daily, basis when she had a child that depended on her?

"I'll talk with Hammond. Make sure he knows this is temporary. And if you decide you don't want to return to an off-world team, then the poor schmuck replacing you might get a permanent position."

She blinked against the tears she felt welling up in her eyes and blamed it on her hormones. "Thank you, Sir."

"I appreciate it." She held his gaze for a moment longer before looking away. It was time to end the conversation because she could feel her barriers weakening. He'd been so kind and supportive, more so than she could have been if their roles were reversed. "I know this is not… It's an unexpected situation and I figured it would be more comfortable to talk about here than on base."

There was a flash of something in his eyes before he quirked her a small smile. "And I appreciate that, Major. I have to go in today anyway, so I'll inform Hammond about your, um, condition and then we can discuss the necessary changes on Monday. I'll leave it up to you to inform the guys, whenever you want. We don't have to broadcast it yet if you don't want to."

"Thank you." She hadn't decided yet how and when to tell Daniel and Teal'c. As for making it public, she'd wait a few more weeks until she entered her second trimester. When she looked up, she found his dark, unreadable eyes on her and sighed softly. "And for what it's worth, I'm sorry… Jack."

His eyes widened in surprise at her use of his first name, but then he nodded and slipped on his sunglasses. His mask was back in place. He got to his feet and shrugged on his jacket, ready to leave. But then he looked down at her, her reflection mirrored in his sunglasses and gently squeezed her shoulder. "Don't ever apologize for having a kid, Sam."