"Secrets aren't secrets, they are weapons. You can save them in your pocket until you need them" - A.

Alec, Magnus, Jace, Simon, Izzy, Clary and Jonathan were best friends all their lives. But in their last year of high school Jonathan goes missing and is found murdered leaving the group devastated.

Things become dangerous when the group starts receiving texts threatening their secrets from the elusive J. When Alec is blamed for Jonathan's murder and almost sent to prison because of it, the group vow to find out who really killed Jonathan to save Alec from those still determined to pin the blame on him and to gain justice for Jonathan.

You can also find this story on my Wattpad account:
https://www.wattpad.com/576925286-secrets-are-weapons-chapter-1 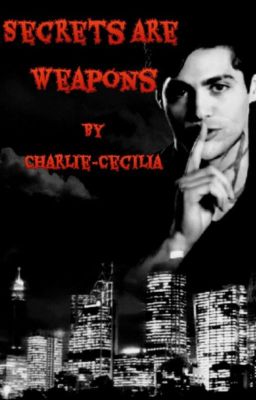 Hi guys I hope you enjoy this story. You don't need to have seen Pretty Little Liars to read this as I change things a lot, but I recommend it it's a great show.

Just a heads up - there will be past rape and attempted rape so if this triggers you skip it and be careful when reading this. I will put in warnings at the beginning of the chapters that need them.

Alec and Magnus are the same age as the rest of the group, so they are all 18. Simon joins the school in the next chapter and is best friends with the group but had to move, which is why he isn't in the story in this chapter.

"No don't!" Alec yelled but Jonathan kept throwing pillows at him much to the amusement of the others, who to Alec's annoyance joined in.

"Come on birthday boy lighten up", Jonathan said with a grin and threw another pillow at him.

It was the night of Alec's eighteenth birthday. His parents had planned a lavish birthday party for him but his closest friends and siblings knew that he hated it and so had thrown him a small surprise party in the Lightwood den after the main party had finished. Max had been annoyed that he had to leave early but they promised to make it up to him with ice cream and that immediately put a smile on his face.

Alec had been so happy they had done this for him. It had been awful having to endure the party, Alec's parents had invited his classmates but had also invited family members who kept interrogating Alec wanting to know when Alec would get a girlfriend. No one knew the truth, that Alec was actually gay and would never get a girlfriend not even Magnus and the others. His heart ached every time a family member would ask him about it, Jonathan had seemed to notice how miserable Alec was and to his relief had subtly pulled him away from such conversations whenever he could.

After a while things calmed down in the den, Alec sat next to Magnus who put an arm around him. Alec wished the arm could be around his waist instead of his shoulders but knew Magnus didn't see him that way. He and Camille were very serious and Alec knew that as long as Magnus had his attention on her, he would never see how Alec truly felt and Alec was too scared to tell him.

Alec noticed Clary about to lean her head on Izzy's shoulder but stopped herself and he could see the sadness in Clary's eyes and it made his heart ache. Alec could tell she wanted to be with his sister but was too scared to ask her out because of his parents. They would never let Izzy be with a girl. Alec also knew Izzy felt the same way, he had seen the longing in both of their eyes and wished they could be together. Alec's heart ached even more at the thought that Izzy hadn't confided her feelings for Clary to him, he thought she could trust him with anything.

Alec and Raj had become very close during the previous year, but the mention of Raj made Alec freeze causing Magnus to frown in concern at Alec. "He-um-he-"

"Couldn't make it", Jonathan finished for Alec and Alec sent him a grateful smile. Jonathan nodded in understanding but his hands curled into fists, Alec knew he was furious with Raj and Alec hoped he wouldn't do anything stupid. Alec noticed Magnus staring at him and turned to him but Magnus looked away when he did.

"I'm so excited to see Sam Smith!" Izzy said excitedly causing Clary to smile happily at her and Alec was glad she had changed the subject.

"Me too I love him", Alec said. Normally Alec didn't really like going to this sort of thing but Sam Smith was one of his favourite singers.

"Maybe a little too much Alec" Jonathan said looking at Alec in a way that freaked him out. He couldn't know he was gay could he? The others seemed to completely miss the tension between Alec and Jonathan.

Jace picked up the pillow and grinned at Alec, "So how about we resume the pillow fight?"

"No!" Everyone said to Jace's disappointment.

Everyone was asleep apart from Alec who stumbled to the den his heart hammering in his chest. He couldn't believe Jonathan had done that to him, he leaned against the door for support and whipped around when he heard a twig snap afraid it was Jonathan but he couldn't see anyone.

"Alexander?" Magnus said sounding anxious. Alec collapsed into Magnus' arms sobbing uncontrollably. "Alec, Alec what happened?" Magnus said urgently but Alec couldn't speak he was in shock. The others were woken up by Alec's crying and came to them.

"What's going on?" Jace said wrapping an arm protectively around Alec, "Where's Jonathan?" Alec's sobbed even harder at the mention of Jonathan making everyone even more worried.

They brought Alec into the den and sat him down on the sofa between Magnus and Jace. Clary and Izzy wanted to join them but there wasn't enough room. Alec cried for a long time, the group stayed with Alec and comforted him. Magnus had tried to leave to get Alec's parents but Alec had freaked out and begged him to stay. When Alec had calmed down enough to talk the others tried to ask him what had happened again but Alec shook his head.

"Alexander please tell us, did someone hurt Jonathan?"

Tears formed in Alec's eyes again and it took everything he had to stop the tears falling again. "N-no", Alec managed to get out, he wanted to say that Jonathan was the one who had hurt him but couldn't.

"What happened then?" Jace snapped getting angry, it had been a couple of hours and Jonathan still hadn't come back he was so afraid that something bad had happened to him.

Alec flinched and Magnus glared at Jace, "I-I can't-" Alec said shakily but was interrupted when the door opened. Everyone turned and Alec's heart started to hammer again, what if it was Jonathan? But to his immense relief it was Maryse.

"I know it's Alexander's birthday but it's a school night you all need to- Alexander what's wrong?" Maryse said, she crouched in front of Alec and cupped his face. Alec couldn't stop himself flinching when his mother touched him, he knew she wouldn't hurt him but he couldn't help it and he felt terrible when she looked hurt.

Magnus spoke for Alec when he saw Jace glaring at Alec and was about to speak.

"Alec still refuses to tell us what happened or where Jonathan is!" Jace said angrily.

"Hey leave him alone", Izzy said just as angrily as Jace and pulled him away from Alec so she could sit with him.

"I am worried about him but Alec is shaken up you shouldn't yell at him and that certainly won't help us find Jonathan".

Jace stormed out of the den after glaring at Alec causing Alec to stare forlornly at the floor. He wished he had been able to tell them the truth but he couldn't and now Jace was furious with him when Alec needed him so much.

"Alec, we need to know what happened", Izzy said gently.

Alec closed his eyes in pain, he couldn't tell them everything that happened but he could tell them enough that they wouldn't find out the truth. "J-Jonathan and I had a big fight and he was so angry with me that he ran off. I... I don't know where he went I thought he would have come back here or to the house", Alec made himself say.

Magnus shared a worried look with the others, "What made him angry enough to run off like that?"

"He...He was mad because Lydia likes me and he said that he wanted to be with her. He felt that I had betrayed him because he thought we were together, I tried to tell him that we aren't and I'm not interested in her but he wouldn't believe me", Alec said and looked away.

"Magnus can you take Alec inside?" Maryse said and continued when Magnus nodded, "We'll look for Jonathan". Maryse was concerned when Alec flinched at the name but let it go for now.

Magnus took Alec inside while the others searched for Jonathan. Magnus comforted Alec, Jace had stalked away the moment they came in upsetting Alec. Maryse, Izzy and Clary searched all night but couldn't find Jonathan. Days went by turning into months and no one had found Jonathan and he hadn't come back. Everyone was afraid he had been kidnapped or killed, until one terrible day when his body was found and word got out that Jonathan had been murdered.