The Ways of Paradox

How do you pass the time when you know you're facing eternity?

Maglor agrees to appear in a student production of The Pirates of Penzance, and gets more than he bargained for.

A couple of people have asked me if I have more stories about Maglor and Claire (who appears in Nocturne and Of Lapwings, Hares and Speckled Eggs). The answer is yes – although both of those fics and this one are intended to stand alone, so don't feel like you can't start here. 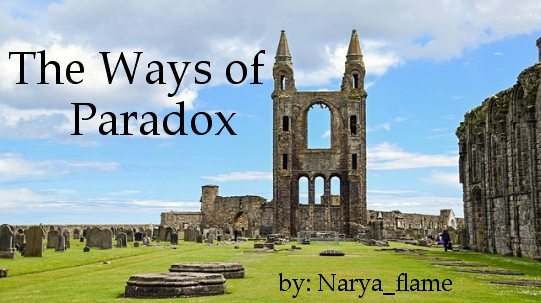 I was getting good at predicting Xander's explosions.

The Pencil was the first thing to watch for. He'd jiggle it between his finger and thumb at first, then start tapping the end of it against his teeth. That was how you knew he was getting closer to Stage Two, The Glasses. He'd keep shoving them up the bridge of his nose like they were sliding down, even when they weren't – and the frames were small, so they'd end up jammed right into his eye sockets. If you were with him in the auditorium, you'd hear him sighing loudly.

The Arms were next. He'd cross them and slouch back in his seat, scowling – and then something would make him lean forwards, feet tapping, chin resting on clasped hands, knuckles white and stark under the skin.

Last of all was The Hair. He'd run his fingers through it until the corkscrew curls stood on end and it crackled with static. The more it crackled, the more trouble we were in.

We were already on The Pencil before the overture finished – a string slipped on one of the violins, so it was hideously out of tune, and its player had to scuttle off backstage to fix it. We got to The Glasses halfway through the pirates' opening number, which was admittedly a shambles, and then Harrison and Theo muddled their dialogue, which tipped us into The Arms. I got through my number without incident and shot back to the wings to watch Harrison's big solo song, but the spotlight that was supposed to follow him as he swashbuckled around the stage refused to budge, so he was standing in shadow as he gleefully pronounced himself the Pirate King. The Hair began to fizz and crackle, and I was already fleeing for a breath of fresh air when the inevitable happened. There was an incoherent shriek about footwork and three-legged giraffes – and then the heavy Union doors swung shut behind me.

I sighed, leaned against the wall of Blackwell's, and pulled a cigarette from the pocket stitched into my apron.

“You do know those will ruin your voice?”

I jumped. I had been so relieved to escape in time that I hadn't noticed him coming out of the bookshop. I recognised him, of course. He was a Philosophy post-doc, but research only, no teaching hours – much to the disappointment of that School's undergraduate community. I hadn't had much interaction with him, being based out of the School of English, although I'd seen and heard him practising the piano in Younger Hall. I swallowed at the memory of the sweet, yearning ache that awoke in my stomach when he played – and then I belatedly realised I was gawping, and forced myself to reply. “Not much there to spoil.” I attempted a nonchalant grin. “I'm just the comic relief.”

“I heard you singing. You're very good.” He smiled then, and the force of it could have turned back the tide.

King Canute, eat your heart out.

It suddenly dawned on me that I was still wearing my straggly grey wig. My cheeks and ears burned.

It was my housemate, Rosie, holding the Union door open with her elbow, since her arms were full of batons for the policemen. Chatter and laughter from the bar tipped out into the street. An elderly man heading for the council office next door gave us a disapproving scowl.

“Xander wants to pick up from your song with Theo.”

I sighed and stuck the unlit cigarette back into my pocket. “Duty calls.”

The musical philosopher raised an eyebrow. “And you are the slave of duty?”

“One could say that.”

My grin widened, and I stuck out my hand to shake his. “Claire James.”

“Mark Lowry.” His right hand felt odd in mine – and then I remembered the awful scarring I'd noticed before, and forced myself not to look down.

“Claire, come on!” Rosie was bobbing up and down like an anxious pigeon. “Sorry,” she added to Mark, "but the rehearsal's been a disaster so far, our director is in the worst mood...”

“I'm coming.” I glanced back at Mark. “You should come and see the show.”

“Do you think you'll survive the rehearsals?”

His lips quirked again, and my stomach leapt up into my throat.

“Thanks.” I gave him an apologetic smile, and followed Rosie back into the Union.

As soon as the door swung shut behind him, she turned to me with wide eyes and a giddy grin. “Oh – my – GOD!”

“What?” I asked, although I had a fair idea.

I was right. “His name's Mark. He's a Philosophy post-doc.”

“Older than you,” I laughed. “I don't know – maybe early thirties?”

“That's not too old,” she said thoughtfully. “Single?”

“Can you invite him over for drinks?”

“What? No! Rosie, that is literally the first time I've spoken to him - at least, properly.” And Theo would be heartbroken, I thought, but said nothing. “Anyway, I might never bump into him again.”

“Oh, you will.” She shook out her mane of honey-blonde hair with the confidence of the lucky few who believe the world will shape itself according to their wishes, because life hasn't yet been cruel enough to teach them otherwise. “That's the best thing about St Andrews – there are, what, like, five streets? Once you've met someone, you're bound to see them again.”

From the auditorium, Xander let out a furious bellow.

A crinkle of worry appeared between Rosie's eyebrows. “Maybe not.”

Thank you so much to Independence1776, who made me the banner with that gorgeous shot of the ruined cathedral in St Andrews as a gift for Fandom Stocking 2018.