My first ever fanfic which is why it's a simple idea and isn't very long. Love Curious Archer and wanted to try and write some fanfiction for them! Started writing this before 7x18 which is why it's alternate and haven't yet been able to watch 7x19 yet. Constructive criticism is very much appreciated. Hope you enjoy.

Tilly glanced up from her position up on top of the troll statue she so often hung around, her fingers absentmindedly twirling the chess piece she’d picked up from the set in front of her. She’d often do this when she was alone as it gave her a strange sense of comfort in a world that she sometimes found so confusing. Things often felt, well… off, like she was only seeing half of the complete picture that was the world around her. There was something missing, but she could never tell quite what it was, not fully. The comfort helped and every so often something would ignite, and she’d feel she was closer to understanding, but each time it would slip through her fingers. Perhaps someday she’d know why she had this feeling, but right now she found herself slowly moving the rook around in her hand, daydreaming into the distance about her next chess game with Rogers.

It was at that moment that she then realised that someone, standing to the right of her on the pavement beside the troll, was attempting to get her attention.

“Tilly?” a voice said. She broke out of her trance and looked at the blonde woman calling her name.

“You okay? Seemed to be in a world of your own for a minute then” the young woman commented, adjusting her glasses.

“Uh, yeah… sorry Margot, didn’t see you there” she managed to say before perking up.

Margot smiled at her, “It’s fine, it’s just I have some free time off work and thought we could hang out. Now that my mom’s gone I’m going to be in the bar a lot more so free time might be a bit harder to come by”.

Tilly nodded and tried, rather unsuccessfully she was sure, to hide her excitement at the idea of spending time with Margot. I’ve only just met the girl, she kept telling herself, I barely know her. And yet she felt comfortable around her, like she could confide in her all her worries and fears. Her insecurities kept telling her that Margot would likely drop her once she started showing her more vulnerable side on those bad days of hers, but there was a part of her somewhere that assured her that wouldn’t be the case, like she could trust her. Between Margot and Rogers that sense of understanding was as close as it had ever been for her and she couldn’t shake the feeling that deep down Margot meant something to her. Neither could she help the connection she felt every time she saw those green eyes, drawing her in to the comfort. She was about to swing her legs down off the statue when Margot noted the chess set that Tilly had moved out of the way in order to prevent her from knocking it and spilling the pieces everywhere, which made her stop.

“Yeah, Rogers gave it me,” she said as she picked up the set and placed it back down in front of her. “We play together when we’re free but… he’s often busy.” Tilly sighed. Margot saw the expression on her face, one of, what was it? Sadness, longing? With a little bit of hope, maybe? “He gave me a home. Nobody ever gave me a home before.”

“Wait what?!!” Tilly’s shock and concern at hearing her friend had maybe been involved with the killer who had murdered several people and then subsequently framed her was clear and only partially subsided when the chess set was successfully knocked off the statue by Tilly’s flailing arm. Thankfully Margot, standing as near to the statue as she was and possessing excellent catching skills she might add, caught it before it hit the pavement. It wouldn’t have done much damage anyway, Tilly briefly thought to herself.

“No, no I’m fine! I wasn’t involved, it was my mom and…”. She gave the chess set back to the other girl “…everything’s been taken care of now.”

Tilly could see that Margot had been somewhat shaken by whatever events had transpired even if she didn’t think she’d admit it. She wanted to take her mind off things, so…

“Do you want a game?” She gestured towards the wooden box in her hand.

“I don’t actually know how” was the other girl’s response.

“I can teach you! It’s easy once you know how really, but if Rogers asks I let him win!”

Margot smiled at that. “Sure. Why not?”

She moved over to a part of the statue that she could climb up and, grabbing Tilly’s other hand to help her, hoisted herself up to the top of the statue to where Tilly was and sat down, as best she could, beside her. Tilly was finding it hard to contain the joy, but also nervousness, at being sat so close to the other woman (and Margot was feeling something similar). She was even more beautiful than she thought, and she wished she had the guts to say so, but that could wait until another time. If there was another time. She shook the thoughts away and opened the set to focus her mind on teaching her friend the ins and outs of chess.

Tilly proceeded to explain the game and its rules to Margot who listened intently, though partly just to hear the enthusiasm in the voice of her peer who she could tell was clearly enjoying explaining it all to her. Once or twice she would feign confusion and ask her to explain some part of it again just so Tilly would continue speaking to her in that energetic way of hers. Tilly kept adding in random facts about the history of the game that Rogers had told her when they first began to play and, in her nervousness, ended up going off on a tangent about hats, and then hares, and then which type of tea was her favourite (“Actually, I don’t mind just… normal tea, like English Breakfast I guess.” “What, uh, no you’ve got to like something more like…”) until it got to the point where they’d completely forgotten about the game they’d managed to start in front of them and continued to sit, chatting about whatever other subjects came to mind. That is until Margot heard a beep coming from her jacket pocket and looked away from Tilly to the text she’d just been sent. She sighed.

“Well, that’s Roni saying she's sorry but I need to go back to the bar. Apparently, it’s getting really busy so she needs me there” She rolled her eyes at the interruption to her and Tilly’s time together and in that moment realised how much her leg was aching from her sitting position. She hadn't realised just how long they'd been sat there. “We didn’t even manage to finish the game.”

Margot was the first to move down off the troll and Tilly immediately missed her presence beside her. She followed the bespectacled woman down, moving the pieces of the set back into the wooden box and placing it in her bag, and then hopped off the statue with ease to land next to Margot on the pavement.

They walked together back to Roni's, suggesting when and where they should next meet (“Friday, 11am at the troll statue again, and I can take you to get some candy apples. Can't believe you've never had one before!"). As they continued to walk they got on to the subject of reading, prompting Tilly to remember the book Margot had been holding during their first meeting when she’d saved her.

“I’m… not really sure. I guess, maybe, it’s because… I love how I can see a world that’s so different to anything in this one. And the characters; love the Mad Hatter, March Hare, the Cheshire Cat of course… and Alice.”

Curiouser and curiouser. It was odd how familiar that name felt to Tilly, how much recognition she found within it, how much happiness she felt when she heard Margot say it like that. But why? The answers to her questions were so close but, alas, they were still not properly surfacing. They reached the entrance to the bar and each said their goodbyes to the other. Margot was just about to open the door to go in when she turned around again to face Tilly, who was on her way to leave.

“You didn’t mention. What you reading at the moment?”

Thanks for reading. As I mentioned constructive criticism is very much welcome, particularly as I think the characterisation could be better and I want to be able to improve for following stories featuring these two. 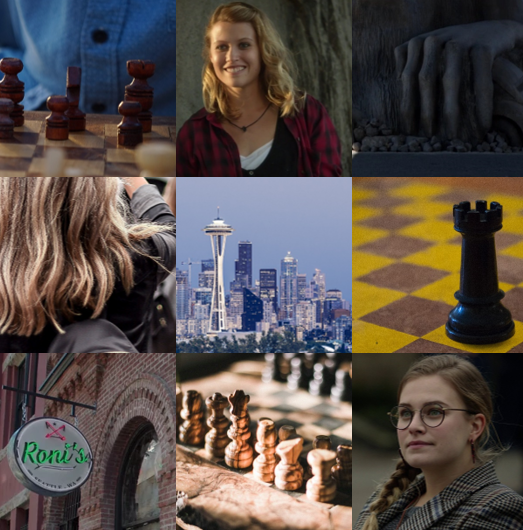