A Labyrinth fic inspired by music not by David Bowie. You can get the angry mob together now. While you sharpen the pitchforks and light the torches, feel free to view this little tale as a prelude of a sorts to Lilac Fantasies. 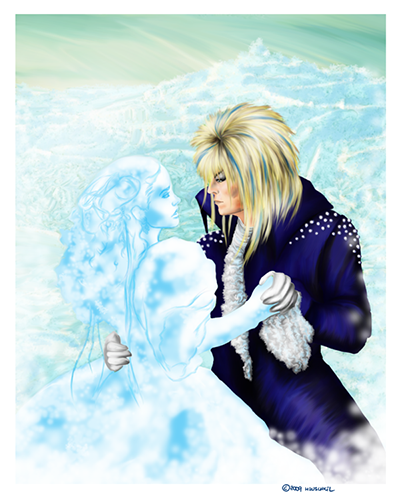 He owns the night. He owns the world that night drapes itself over. Night’s distant stars sparkle, its lights shimmers. Its crisp air breathes against his skin and his soul in harmony, and it all belongs to him. Reality bends itself to make his visions real. Reality has no choice. He is the master of life and death, of existence and of oblivion. The world is not just his oyster – it is his plaything, his toy to use as he pleases. He is the master of wishes, the story teller, the magician who turns fantasy to flesh, dream to reality, idea to life.

But what obsession satisfies a man who has everything?

The only thing he does not have, that he never could have, is imagination. The knowledge bites and claws and gnaws at his very being – there is something he does not have, and cannot have. He is the master. All power should be at the beck and call of the powerful. Who decided that he should not share this mystery? Who has that right?

He has resolved to learn. He will figure it out. He will learn to dream on his own, learn to make up stories. At first they will be mere wisps of wishful thinking. They will mature, then grow. He will create the world. He will become the world. Reality will continue to bend to his desire.

Tonight he stands in the centre of yet a dream not of his own imagination. He has made the dream real. He has breathed it alive, again. Woven it into existence, again. It is his, again.

Like pieces of fragile glass, the ballroom shatters. The flimsiness of its very nature betrays it. Memory is not solid. The crystal fragments of a girl’s prepubescent vision falter and scatter and float like silent snowflakes around him until nothing remains but him.

Again. The wisps of wishful thought are not yet strong enough.

She wore white. Virginal white. The colour of innocence, fit for a juvenile princess. He would have preferred her in something more mature, something with more colour. He would also have liked for her to be older – or younger. Old enough to be a woman, knowing what she likes and wants from him. Or young enough to enjoy instead of asking how or why. A child delights in magic. This woman-child, caught up in her own petty issues, was a troublesome guest and not much to his liking.

But he must love her all the same. He spun this dream, this world from her fantasies. In those, he plays the role of villain – and of lover. He hates her, and he loves her, and it’s how it is meant to be. What is puberty if not the conflict of emotions?

He tries not to think about it too often. He doesn’t care to be reminded how she broke his carefully crafted dream. How she shattered it and tore it apart. He gave her a world, and she turned it down. He reminds himself that the fantasy was just that – a fantasy. She wanted a tale where she got to defeat the seductive villain. He gave her that. She will always win and he will always lose. No matter how many times he forces this ballroom back together from its fragments, it will shatter. When he thinks about this he hates her with a passion that would have erased her from existence, turned her into a mere stain on his sandstone floors – if she had actually been here.

Time rewinds. Once more the dancers weave in and out between each other in the tapestry of their dance. Pale stones sparkle on his sapphire blue jacket collar. The music caresses the night air which in turn worships his cheeks and lips. The magic tries to convince him that everything is just as he wants it to be.

He forgets. He plays his part. He is reminded.

Somewhere out there in the real world – the one that is obnoxiously real – the girl lives happily ever after. She grows up. She marries. He wants to walk away. He wants to find another soul full of dreams and build another world for it. One that gives himself a happier ending too. One where he gets the girl and the dream can last, happy ever after really is ever after, or at least until the dreamer dies of old age. Then everything will have to begin anew. Again.

It never really ends. He is the king of fantasy with no reality of his own. He can be anything they want. That is his blessing. He has forgotten who he really is. That is his curse.

He wants to believe that this can change. With the right dreamer, with the right fantasy he could become real in that other world. The wisps of fragile dream – every time they seem a little bit more solid until suddenly they do not.

The dancers continue to perform. The music, as otherworldly and ethereal as himself, plays once more. The ballroom exists again, to be destroyed, again. He will get it right some night. She will come to him and stay with him, some night. She must.

What obsession satisfies a man who has everything?

Laura Branigan’s 1984 hit Self Control predates Labyrinth by two years but has similar themes. The ballroom dream and the grabby hand, the loss of control and the seduction by a powerful stranger, the masks … Jim Henson’s team worked with trends and ideas that were big in their time. Labyrinth just did it better than most of the 1980s. Self Control obviously had a video – what hit didn’t in the golden age of MTV? It lacks, however, the storytelling genius of Labyrinth. To top it off, the video has heavy date rapey undertones. It is, however, a showcase of 80s fashion and beauty ideals. I was 13 when this video came out and believe me, nothing was hotter than this.

A Labyrinth fic inspired by music not by David Bowie. You can get the angry mob together now. While you sharpen the pitchforks and light the torches, feel free to view this little tale as a prelude of a sorts to Lilac Fantasies.