This story takes place after Thot Patrol: Origins.
It all seemed like it was going to be a normal day for our heroes, but when Thots are still a threat in this world, you know that a normal day can change.
After receiving a call from the Dean of Wang University, our heroes knew that they had more Thots to take care of.
However, this was going to be their hardest mission yet.

Chapter 1: The Call of the Dean 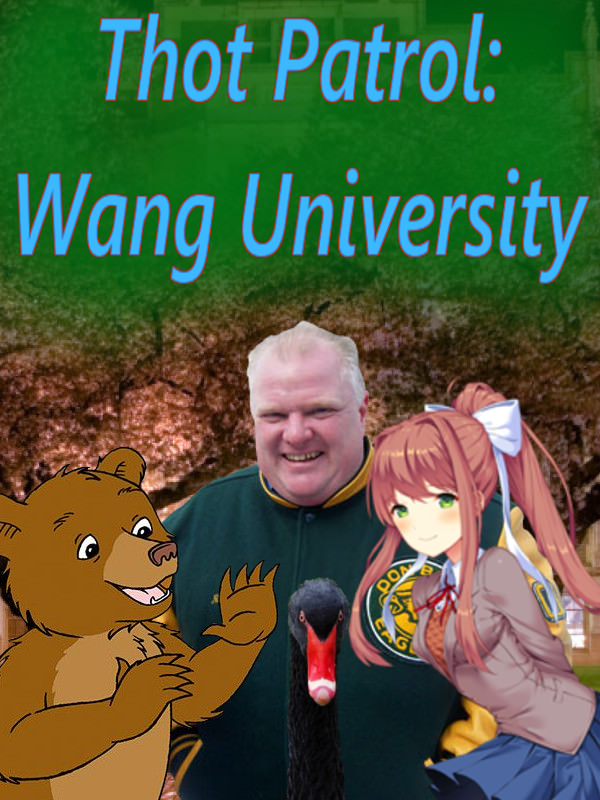 It was a nice, quiet day at Ford High for our four heroes.

Monika was at her literature Club, sharing her poem with all of her friends.  Little Bear was also at the Literature Club.  It didn't take long for Little Bear to make friends with everyone there, and he was having fun writing poems.

Right outside, William was with his family.  His kids have grown quite a bit, and were now about a quarter the size of him and his mate.  It always surprised him how fast his kids seemed to grow up.

Finally, Rob ford was in his office.  He was switching between looking at some boring school stuff, and studying his crack.  He still didn't know how it made all the Black Swans sentient, but he was determined to find out.

It seemed like it was just gonna be another normal day for our heroes, which was a good thing for them.  Ever since they formed Thot Patrol, they had managed to clear out all of the Thots.  So things staying quiet meant that they had successfully kept their school safe.

However, their seemingly quiet day was about to change.

Rob Ford's special Thot Patrol desk phone rang, and he of course quickly picked it up.

“ Hello this is Rob Ford, leader of Thot Patrol, how can I help you? ” Rob Ford asked, trying to sound as professional as possible.

“ Oh good!  Listen, I have quite a big Thot situation that I need help with. ” A older sounding black man responded.

“ How big of a Thot situation are we talking about here? ”

“ Ever heard of Wang University? ”

Rob went quiet.  He knew all about the quite large Wang University.

“ Are you telling me that Wang University is having a Thot problem?  How severe is it? ” Rob asked.

“ There are more Thots here than there are regular students. ” The man replied, in a slightly sad tone.

As soon as Rob heard this, he was ready to get the group together.  However before he did, he just needed to ask who the man was.

“ Yes, my name is Anthony Jones, or Dean Jones.  I am the current Dean of Wang University. ”

Rob was quite surprised by this.

“ Your the Dean?  I thought Catherine Smith was the Dean. ”

“ Not anymore, crazy bitch was caught selling drugs to students.  Apparently she had the drugs shoved up her ass…  So now i’m the Dean. ”

“ Well Dean Jones, i'll get everyone gathered, and we will head down there to meet you. ”

Jones agreed, and they hung up.  Rob grabbed a decent sized bag of crack, and ran out of his office.  His first stop was the classroom that Monika and Little Bear were in.

Rob ran as fast as his fat ass could, and eventually made it to the classroom.  He opened the door, alerting everyone in the classroom to his presence.

Monika and Little Bear were in the process of reading each others poems.  But they knew that if Rob needed them, then it must have been some Thot Patrol business.

“ Little Bear and I will be right back everyone. ”

Monika and Little Bear walked out of the classroom.  Rob closed the door when they were out, and turned to the two.

“ Alright, so here's what's going on.  The Dean of Wang University contacted me, and told me that they are having a very big Thot problem.  And by big, I mean more than half of the students there are Thots. ”

Monika and Little Bear had looks of surprise on their faces.

“ Oh no, we have to tell William about this! ” Little Bear said.

Rob and Monika nodded, and the three made their way outside.  They were easily able to find William, and immediately explained the situation.

“ Oy, this sounds like quite the problem.  By the way, what's this Deans name anyway?” William asked.

“ His name is Anthony Jones.  But that's not important right now, we just gotta get down to Wang University to meet him. ”

“ How long are we gonna be gone for?  And how long will it take for us to get there? "

Rob thought about it for a moment.

“ Well sense we are in Vermont, and Wang University is in Miami, it will take us about a day or two.  And I don’t know how long we will be there for. ”

“ I dont know.  Wouldn't feel right being so far from my family. ”

Everyone looked at William with understanding looks on their faces.  But before anyone could say anything to him, Monika had an idea.

“ Wait, what if your family stayed with my friends?  We all live together, and they wouldn't mind having some temporary guests. ”

William thought about it, and walked back to his mate.

“ Oy, apparently there’s a BIG Thot problem going on at a University in Florida.  So i'm gonna have to go down there with Thot Patrol, and deal with those cunts.  I hate being away from you and the kids, but those Thot cunts cant be allowed to spread their evil ways. ”

William and his family then walked up to the group.

“ One more thing Olivia.  I'm gonna have you stay with Monika's friends at their house.  You remember Monika right? ”

Olivia looked at Monika, and smiled.

“ Of course!  Her friends are the one that come out and give us corn, right? ”

Everyone then walked into the classroom, and Monika explained the situation to her friends.

“ So, Thots are trying to take over Wang University? ” Natsuki asked in confusion.

“ We don’t know yet, but all we know is that there is an alarming amount of them there. ” Little Bear replied.

Yuri and Sayori on the other hand was more focused on Williams family, specifically his kids.

“ Dont worry William, we will take good care of your family! ” Yuri said, while petting one of the kids.

“ We will take good care of them William, but make sure you call us so we knew you guys are safe. ” Sayori said, while kneeled down next to the kids.

With everything in order, Rob, Little Bear, Monika, and William were ready to leave.  They waved goodbye, and walked out of the room.

As they were walking out to Robs car, Little Bear looked down at William.

“ Don’t worry William, your family is in good hands. ”

William looked up at him.

“ I'm not worried about that Little Bear, I know they are good people. I'm just think about Wang State. ”

Little Bear understood, and they continued their walk to Robs car.

They eventually made it to his car.  It was a new looking four door yellow Hummer.

“ We should be able to get there in about a day.  I brought my special driving crack so I won't have to sleep. ”

Everyone nodded, and they hit the road.

ImfaMagazi and ListenImTrash as well as 2 guests left kudos on this work! (collapse)