You've Got the Universe Reclining in Your Hair

At age seven, Jack Zimmermann does not understand romance. Love, he gets. He loves his maman, his papa, chocolate cake, snuggling on the couch with his mémé while she sings to him in French -- so love he gets, sort of. But romance? Jack discovers the meaning of romance.

Happy Valentine's Day to Gloowel, also known as jlzsoftie on Tumblr. She wanted a Jack-centered or Zimbits story -- and I was more than happy to oblige. I love Jack! <3 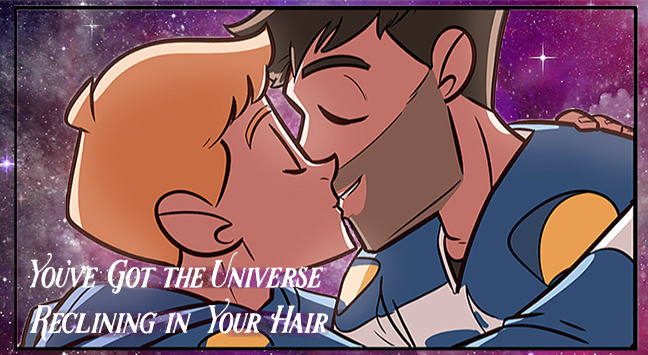 Jack feels the warmth of the sun stream through the curtains. He stretches languidly and turns over to the little burrito asleep next to him. A tuft of Bitty’s hair peeks out from underneath the pocket of blankets Bitty has burrowed into.

Jack smiles and boops Bitty’s cowlick, and watches it spring back up. He grins as Bitty groans from underneath his cavern of blankets.

“Let me sleep, Jack Zimmermann,” he says groggily--a playful tone underneath the grump.

Jack leans over and kisses the cowlick (one of his most favorite things to do) and whispers to Bitty’s head, “You’ve got the universe reclining in your hair.”

Bitty pokes his head out from under the blankets, eyes still sleepy but his lips burst into the most dazzling of smiles.

At age seven, Jack Zimmermann does not understand romance. Love, he gets. He loves his maman, his papa, chocolate cake, snuggling on the couch with his mémé while she sings to him in French -- so love he gets, sort of. But romance? The best he can make is that it’s when you show someone you like them.

He sees papa bring maman flowers, he sees maman hug papa after he loses a game, he sees it in the movies -- oh, the movies. He sees it, but he has no idea what it really is or how to go about it.

So when he gets a crush on Suzette who sits in the fifth seat of the third row in Ms. Olivier’s class, he has no idea what to do.

One night, he is watching Grease on the television with his parents and they sing along to the songs and laugh and eat popcorn. Jack smiles. And toward the end when Sandy says, “Tell me about it, stud,” Jack is intrigued. He’s not quite sure what Sandy says, but he knows her line gets a reaction from Danny and soon they are dancing together and happy.

That Monday in Ms. Olivier’s class, Jack waits all day for Suzette to talk to him.

“Jack, can I use your eraser?”

“Tell me about it, skunk,” he says happily… that is until Suzette frowns at him and calls him a jerk. He blinks at her reaction and shrinks back into his seat.

At age 13, Jack Zimmermann has lost all the baby fat and has grown five inches. The girls notice him, and he’s beginning to notice being noticed. He is also beginning to notice the boys. This doesn’t worry him as much as he thinks it would. Still, he is afraid.

He wonders what it’s like to hold hands. To hug. To kiss. After school he sees Charlie Tremblay ride his bike down the block on his way home with his friends. His long legs pedaling, as Jack watches him go.

He takes note that Charlie’s friends have a light on their helmet. Charlie does not. That day after school, Jack goes to Roy’s Bike Shop and buys a light for Charlie using his money from walking Mrs. Gagnon’s St. Bernard.

The next morning, Jack leaves the bike light in Charlie’s locker with a note that reads: “To keep you safe.”

Charlie finds the light and the note as Jack watches from the water fountain, pretending to take a drink. Charlie smiles and then tells his buddy Simon that he hopes it’s from Madeline because she has big boobs.

Jack frowns and shakes his head as he walks to his first class.

At 21, Jack dates Samantha Lopez for two months. In that time he thinks he might fall in love with her. It would be easy. They meet in their Literature of WWII class and Jack likes her quiet strength and humor when she argues in class. She’s quiet, smart, very tall, pretty, has large green eyes that are always brimming with warmth. She’s not into sports, at all--a departure from his usual type which is actually quite refreshing.

Jack thinks he might be able to fall in love with her. She is kind and never asks for anything in return. They go to the campus movie theater and watch old documentaries together. When they kiss, Jack thinks he might feel it in toes, but he’s not quite sure. They study at Founder’s laughing at history jokes (“Why was WWI so quick?” “Because they were Russian.”), they eat pizza, and sometimes hold hands on the way back to the dorms.

When they finally sleep together, Samantha is lovely but something feels off. She can feel it; Jack can feel it, too. And as Jack sits on the edge of the bed, slipping his t-shirt back on, Samantha tells him.

“Jack, you know I think the world of you. You’re nice and smart, and so handsome but I just… I just don’t feel that romantic zing, you know? And shouldn’t it be about romance?” she asks.

Jack nods and says he understands. But he doesn’t. He’ll never understand romance it seems.

The very first thought that crosses his mind is how small he is compared to the rest of the team. He wants to protect him. This confuses Jack and brings out feelings in him that he doesn’t want to claim responsibility for, much less acknowledge. He’ll be a good captain and help him with his checking issue because that is what a good captain does. He does what needs to the done for the benefit of the entire team.

And that will be the end of that.

Much to Jack’s surprise, he and Bittle become friends. Good friends.

Jack often sits next to him on the bus during roadies; he walks home with Bittle after Winter Screw; they eat froyo at Samwell Superberry; he carries Bittle home from Spring C; he jumps over snow banks to ask Bittle for coffee; takes photos of Bittle all the time.

And when his father tells him he misses 100% of the shots he doesn’t take, Jack realizes that he now understands romance. He understands romance in a way he never did before. He understands it because as he runs across the campus with his graduation gown flapping in the wind, as he races up the stairs, as his heart bursts when he sees Bitty teary-eyed standing in Jack’s old room-- he knows it and breathes it. This is it. It’s all he ever wants. He wants to make Bitty feel like the most special person in the entire history of the world. Every single day. Bitty forever and ever.

He rushes forward and takes Bitty into his arms and into his life.

At 25, Jack Zimmermann is in love. He knows this for a fact. Hockey and Bits are all that matter, and Jack knows that Bittle outranks hockey. And… this doesn’t throw him for a loop.

He places Bitty’s notes of encouragement on his fridge and touches them gingerly as he walks by the kitchen each morning; he fills the Haus with roses; he makes funny voices for Señor Bun; he buys Bitty the entire line of Ivy Park clothing.

Jack hears songs on the radio and picks out lines that make him think of Bitty and then recites them to Bitty-- tiny found poems that convey the things Jack feels but doesn’t know how to say.

And when Jack is running errands with George after one of their runs, they stop at Williams-Sonoma and Jack can’t help but purchase a Le Creuset cast iron pot in Samwell red for Bitty. He also picks up a mortar and pestle for good measure. And some heart-shaped cookie cutters. And some oven mitts with rabbits on them. George smirks as she leaves the store with her one wine opener.

Jack drives the 45 minutes to Samwell, stopping at Annie’s on the way, to spontaneously bring Bitty a caramel macchiato and surprise him at Founder’s while he studies. A quick kiss behind some bookshelves and he’s back to Providence.

He texts Bitty pictures of the horizon during his morning runs and tells him he’s thinking of him; he sends Bitty a roll of his favorite tape in Pride colors; he rubs Bitty’s feet as they sit on the couch watching Drunk History. During roadies Jack texts Bitty snapshots of his hotel room with a sad emoji, telling him the bed's too big without him; he folds Bitty's clean clothes early in the mornings, fresh from the dryer, as Bitty sleeps; he makes dinner for Bitty and slow dances with him on the apartment balcony. And when he holds Bitty close, Jack can feel both of their hearts race and all he can do is say, “I love you, I love you, I love you.”

Every day he wants to continually celebrate Bitty. Jack wants to show Bitty how important he is. And so he does. And if that’s seen as being a romantic, then that’s one label Jack Zimmermann is 100% completely okay with.

Jack watches Bitty curled up in their bed and leans in, wrapping his arms around him as he begins to hum Bitty’s favorite Beyoncé tune, softly into his ear.

Title is taken from the classic Glam Rock song “Jeepster” by T. Rex, which I figure Jack likes because of his penchant for Dad Rock, and also that line is fabulous.

Other song lyric alluded to in fic is Bed's Too Big Without You by The Police.

All OMGCP characters belong to Ngozi. <3