Dinozzo is in Hawaii to lick his wounds but SECNAV has a favor to ask of him. Help F-0 track an international criminal to a private island retreat. A Couples Island Retreat. Steve doesn't want to be on this mission but he is the only person who can identify the target. he certainly doesn't want to play lovey dovey with some cocky NCIS hot shot.

so... yeah. before i write on one of my other WIPs, i'm starting this one. *sigh* here we go. the inspiration song is "Everything Stays" by Rebbecca Sugar. it's so sad and sweet and happy too. 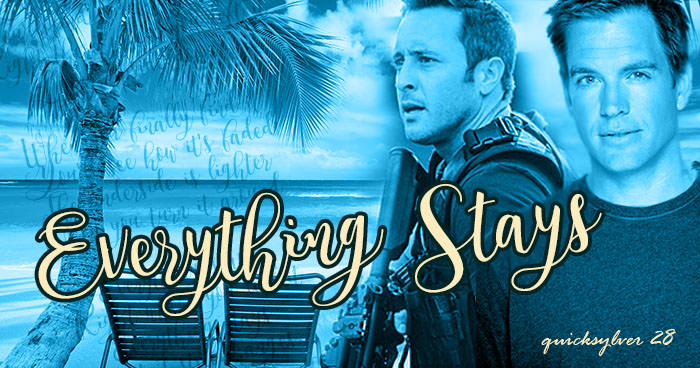 Tony let the endless music of ocean waves wash over him as he reclined on the sun bleached deck chair. The air was warm and sweet and the sun was hot and bright against the shade sail someone had rigged up over the chair. He sighed. Between the warmth permeating through the heavy canvas and the blunt in his hand, his body was feeling pretty good.

He brought the joint up to his lips and took a deep pull, letting his eyes fall closed as he slowly breathed out. His shoulder twinged but he refused to tense up, cataloguing the pain then letting it go. His hand twitched in his lap, fingers curling but the pain that usually accompanied it had been soothed away by the weed. His leg spasmed, this time the pain pushing through his mellow and making him wince.

He tried to squirm into a better position but that just caused a spike in discomfort, making him gasp and  sit up. That sent the pain up his left side through his shoulder and all the way down to his fingertips and had him bent over and cursing; tears forming at the corners of his eyes.

It took a few minutes before he could lean back into the chair, his body trembling as tears slipped down his cheeks. That had been a bad one. And he'd been so careful too. He'd been having a good couple of days but it seemed his luck had run out.

"Sonovabitch" he breathed, blinking rapidly and reaching carefully over to pick up the joint from its ashtray to take another pull.

He eyed his beer, chilling in its tacky little ice bucket. He'd timed everything perfectly so that he could enjoy it out on the lanai this afternoon but he would have to forgo it if he needed to take his pain medication early. He debated in his mind whether he could save the pills for later and have the beer now but that would leave him in a quandary if the pain became too much.

For all his loud protestations about taking drugs in the past, he was stone cold serious about his situation now. It had been a hard lesson to learn but he'd learned it well.

After some back and forth in his head and a few more hits, he decided that having the beer was worth it. Setting down the joint, he grabbed the bottle by the neck and set it in his lap. It was the twist off kind so he wouldn't need an opener Thank God. Carefully, he closed the fingers of his left hand around the bottle with his right and tried to twist off the top.

His left hand twitched, loosening its grip and the bottle spun uselessly. He growled under his breath, willing the fingers in his left hand to clench as he twisted with his right. After a third try, he had to rest his left hand and arm for a minute, psyching himself up for one last try. He wanted his beer dammit. Next time he'd get a fucking keg put it. Shit.

He took a deep breath and clenched.

"Shit!" he cried, flinching as the bottle flailed out of his lap and fell to the floor, breaking across the decorative stone tile. "Motherfuck"

Tony frowned down at the beer and took a trembling pull at the almost completed joint. He felt irrationally angry at whoever was at the …

"Alright Already Keep your panties on!" he shouted, pushing himself up and swinging his legs off the deck chair.

A pulse of pain shot up his body like quickening and he hissed through his teeth. Getting up and into the house took entirely too long for his tastes but eventually he made his way to the front door. Good thing the small house was open concept and flat as a fucking pancake.

His frat brother Eddie had volunteered his vacation home for Tony to use when he'd visited that last time, saying that Tony just had to say the word. He always thought he would take the offer up for an epic surfing weekend but the best laid plans and whatnot.

He made it to the door and peeped through the curtains, frowning as he saw the naval officer standing there in his neatly pressed dress whites. Tony frowned and limped to the door, opening the eye flap.

The officer introduced himself as Lt. Reyes, with a message directly from SECNAV.

"The Secretary would like to speak personally with you Agent Dinozzo. He requests that I escort you to the nearest M-TAC Sir."

Tony made him show his credentials, twice, before sighing and resting his forehead against the wooden door. He really didn't want to do this now. What on earth could make the Secretary of the Navy want to speak to him personally?

He'd already given all the statements and let all the picture evidence be taken during his stay at the hospital. He'd jumped through all the metaphorical hoops that Internal Affairs had placed before, behind, above and under him before he left Washington.

"You can tell the Secretary thanks but no thanks. I'm under strict orders from my doctors not to exert myself or put myself in any situations of undue stress. I may technically be on my accumulated vacation days but it was grounded as medical leave and therefore I am under no obligation for report in."

Reyes nodded, lifting the heavy case in his hand. "He said you would say something like that Sir."

Reyes was quick and efficient, his movement perfunctory as he set up the portable M-TAC on the wrought iron and glass dining table. It probably had another name, an official one; Reyes had probably mentioned it but Tony could remember.

After setting it up and instructing Tony whish button to press, he made himself scarce, closing the front door behind him and going out to the car. Tony stared at the machine, its blinking light just above the connect button. He wondered if there was any way he could just ignore it all and just be left alone to wallow in his own misery.

He let his thought drift on the matter of whether he should try for another beer or if he should just call it a lost cause and take his medication. He wibbled on the subject for a minute or two before pulling himself back to the present and pressing the button before he could change his mind.

The screen came to life with a beep, the NCIS MTAC logo coming up for a few seconds. A second, longer beep sounded and SECNAV's bearded face appeared on the screen.

"Sir" Tony replied, forgoing  his usual gregarious personality. He'd left all that behind in DC.

SECNAV paused, clearly not used to this new, somber Tony.

"It's good to see you doing well. How is the Big Island?"

Abraham Tanner took a moment to look at the man, who had been and to him, still was one of his best assets at NCIS and sighed internally. God, what a cock up the last two months had been. If it wasn't for the stunning solve rate of the MRTC and the ugly snarl of politics involved with its members, he would have scrubbed the whole team and hung them out to dry.

What a waste. What a fucking waste. If they were lucky, Dinozzo would one day agree to come back to NCIS. Hell, he'd give him a team and a choice position anywhere in the world if it helped them keep him. Unfortunately, Tanner was a realist and the window for his agent returning was getting smaller and smaller.

"I need your help Tony." he said, knowing when to cut to the chase.

He could see the edges of pain on the young man's face, see the tiredness in his eyes. See the all-around '100% Done' air he could see hanging off his agent. When Dinozzo didn't speak, Tanner felt his heart sink. For, what he hoped would not be the last time, he began to brief his agent.