In The Name Of Peace

As heir-apparent for the Cecropians, a species of snake-people who live in the plains, Dean always knew he'd be expected to have at least one political marriage. However, the mountain-dwelling Enochians to the north were not who he expected to have to marry. Now Castiel is here, and his customs are strange. What with their legs, their wings, and the whole third gender thing, he's out of his depth.

Castiel did not expect to be suddenly married off, and living among Cecropians is not easy. They're coarse and uncivilized, worshipping many gods and marrying many spouses. Now Cas has to navigate a world without chairs, where no one understands how to even properly introduce themselves with their pronouns. And they think he's the weird one!

They're as different as they can be, but a treaty rides on the health of this marriage, and they have to learn to come together.

Hi guys! Here we are with my SPN AU Big Bang!

Before we begin, thanks go out to (as always) stupidbadgers as my main beta and cheerleader, as well as elliedew for stepping up and helping when badger couldn't. Elliedew also drew the maps in the appendix (yes, there is an appendix), so be sure to check those out! Illustrations are by diminuel, and she did an AMAZING job! Plus, the original idea was inspired by her art, so special thanks to her for letting me borrow her ideas and run with them into my own universe.

To the nitty-gritty: So the world in this fic is made up of absolutely no humans! There are four species, all of them with different cultures, and some of them have cultures within their culture! Most importantly though, is the fact that they all have different views on monogamy/polyamory, sexuality, and gender. Some of the misunderstandings in this fic center around one character having been raised with a completely different view on these things, and everyone having to come to terms with that. Some characters don't want to, and some do.

There are also several cultures in this world that mimic real-world cultures. I researched what I could, and tried to get help from others where more than Google was needed. That being said, any mistakes are my own. I did my very best, and I'm sorry if I overstepped anywhere. 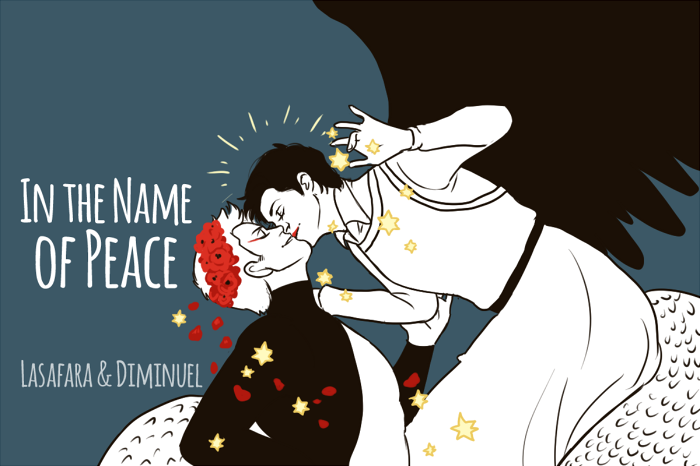 Sam was already lying in the sands, rolling luxuriously. His roughly twelve foot long tail was a dark reddish-brown, with two golden stripes running down from where his torso faded into scales, along either side of his belly to the tip of his tail. His scales were gently scraping against the sand, which helped to keep them clean. Water was less common in this region, and too much water could cause problems with their scales anyway. Most Cecropians preferred sand baths, and used water only to sponge off their humanoid torsos.

Dean was only slightly shorter, his green tail speckled with golden spots from his waist to the tip. His hair was cut short, a style that was only a little longer than the typical military cut for male Cecropians, which he only got away with because he was next in line to the throne. Sam, as the second-born, did not have to worry as much about leading the military, and had chosen to go into the priesthood. He kept his hair long, in keeping with initiate traditions. Currently, he kept his hair tied up on the top of his head in a bun, so that it didn’t become too encrusted with the sand he was rolling in.

“Come on, Dean. I know you weren’t happy that you had to come back for the wedding, but once the treaty is finalized, Dad will have more resources. You want that, right?” Sam said, stretching his tail out in front of him as he relaxed on his elbows.

“Yeah, yeah, easy for you to say. You don’t have to get married to some dude you’ve never even seen,” Dean grumbled as he slid into the sand bath with his brother. It was warm and soft, and rubbed deliciously against his scales, scratching all the itches he didn’t even know he had.

“Mama has a picture of him. Apparently she and Mom have been working out this treaty for a while, since before you and Dad left to go deal with the border skirmishes. So, if you wanted to see what he looks like…” Sam trailed off as Dean grunted. “Or you can be a pissbaby about the whole thing. You decide.”

“How the hell is this marriage even supposed to work, anyway? He doesn’t even have a tail! He has wings! Enochians are weird-looking. I’m sure we can’t actually have kids together,” Dean grumbled.

“It’s not about having kids and you know it. You could adopt, or take on a local wife, or whatever. It’s a political marriage, Dean,” Sam said.

Dean was quiet for a long time. “Guess I always hoped there’d be some kinda feelings involved in my first marriage, s’all.”

Sam didn’t have a response for that.

Castiel shifted in the carriage, trying to adjust his bluish-black wings behind him. His mother, Naomi, glanced at him disapprovingly. She had somehow managed to situate her gray wings perfectly as soon as she had sat down, and she hadn’t needed to shift them once. It was probably sheer stubbornness on her part, he thought.

“Anyway, as I was saying, Castiel, this is a wonderful opportunity. I’ve been talking to Mary and Kate Winchester by courier, and this seems to be a perfect match for you. You know your father and I have been concerned about your future,” Naomi said, clasping her hands in front of her.

“So you decide to send me to an entirely different country? One we barely understand, for which one of our only friendly contacts in history is setting up this treaty?” Castiel asked. To one who didn’t know him, it might have sounded almost neutral, but the caustic nature of the words weren’t hidden to his mother.

“Oh, don’t be silly, dear. You decided to do this. I gave you all the opportunities in the world to back out, but you insisted you wanted a loveless, sexless marriage,” Naomi replied, waving her hand as though to shoo his words out the window. “It’s perfect. There is no way you could be fertile with a Cecropian, so there shouldn’t be any expectation of birthing his child. Your husband-to-be apparently believes in being a bit of a… well. Unfaithful, so to speak, so he’ll find himself some nice snake lady and she’ll have his heirs. You’re just going to be there to look pretty.”

“Great. Because I excel at that,” Castiel replied.

“Well you certainly don’t excel at anything else useful. Anyway…” Naomi continued expounding on the virtues of this trade, discussing all the ways it would help their nation.

Castiel tuned her out, staring out the window. The idea of leaving his home permanently was abhorrent, but his mother had made it clear that he needed to find some way to be useful. He’d tried to argue that he was, in fact, an excellent soldier, but Naomi had pointed out that soldiers were plentiful, that Lucifer, as second-born, had already been trained thoroughly in leading their army. Michael was heir, Gabriel had taken over trade negotiations as third-born, Raphael was the fourth-born and had gone into medicine. Anna, only a year older than Castiel himself, was training to be a priestess to Ealdra. James, his elder by a span of minutes, had been married off to appease a disgruntled noble, in the process finding that he loved his new bride very much and enjoyed animal husbandry. He was now working to combine Raphael’s knowledge of medicine with his own knowledge of animals in order to better care for the kingdom’s beasts. This left very little for Castiel to do. He wasn’t interested in going into the priesthood, nor medicine, nor trade, and Lucifer was very possessive of his place as general.

As youngest, Castiel was in the perfect position to be married off for the betterment of the nation. He’d been aware of that as long as he could remember. The problem, however, was that the idea of sex did not appeal to Castiel at all. And generally, marriage meant some kind of sex. It was a frustrating position to be in. Certainly, were one of his older siblings to unexpectedly die, he could take over their job, but that isn’t a thing he’d actually wish on his family. Besides, he didn’t actually want any of their jobs. He just wanted to quietly live his life, protecting the peace in the tiny town surrounding the castle and going largely unnoticed.

It was too much to ask, though, since he was, in fact, royalty. His mother had been hinting that this was a possibility since he’d turned 18, two years previously. Frustratingly, there was little he could do to prepare for the eventuality, because there was no real guarantee where she might send him. She’d arranged this whole situation before telling him, and had actually even had all his things packed during the night while Castiel had been on a spiritual retreat with Anna, so that they were all ready to go when he came back that morning. Then Naomi had bundled him into the carriage and they’d begun the journey to Cecropia.

Now they were nearly there, after a week of being on the road, and Castiel was tired. He was upset, because Naomi had not bothered to pack anything on Cecropian culture or history for him to read, nor was she particularly interested in answering any questions regarding the snake-people. Cecropians did not often travel as far north as Enochia. It was generally much cooler in Enochia, since the country was not only further north but higher in elevation, and Cecropians did not deal well with the chill. Enochia was just also harder for them to navigate, as the trees and undergrowth were denser, the trails smaller, and the mountains steeper. Most knowledge about Cecropians came from folktales, hearsay, and trader gossip, and tended towards the negative (except, of course, with anything that would help a sale). Castiel had hoped that this week he could spend learning more about his future husband and in-laws, but apparently Naomi wasn’t concerned about him making a fool of himself.

Castiel sighed, staring out the window at the scenery passing by. He could see the Cecropian capital coming up in the distance. He supposed it was a moot point now, since there was no way he could learn anything with only minutes before they arrived. He nodded absently at his mother’s continued delight at the possibilities this marriage could provide for her, the family, and the country, and adjusted his wings again. He could only hope for the best, he supposed.