All it takes for a dream to resurface is a sleepy ferret and a brother who has kept the family secret for decades. A slow-paced, snarky tale of goblins, kings, fantasy artists, dreams, and how 2008's youth just isn't what it used to be.

This is a work of tribute to Jim Henson's "Labyrinth". No money is made and much love is shared. I owned nothing at the time of writing but a lilac tree out in my yard and a horde of ferrets. 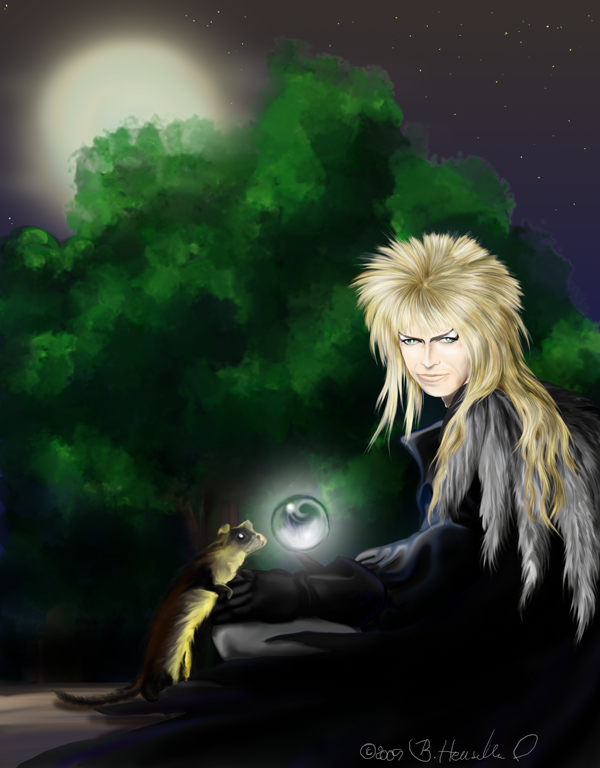 The marble floor was cold. Warmth radiated from somewhere up there amidst a luxurious supply of charcoal grey satin. She dropped her toy and crawled up one boot discarded by the bedside and sniffed before poking her head in. Warmth. Her entire body twitched with excitement as she snuck into the warm, welcoming darkness. She wormed her way between folds towards the warmest area. A foot. There was a foot in her warm nest. She sniffed it. It smelled kind of nice but not the right kind of nice. She licked a toe. Not bad. If it would kindly move a bit she'd be able to lie in the warm spot. She bit it for good measure.

Jareth, King of the Goblins, Lord of the Labyrinth, and a handful of other extravagant titles, made a most inelegant exit from bed when something bit his royal foot. He yelped and held his injured foot in one hand whilst balancing on the other leg, looking around for his unseen assailant. The bedroom was empty as it should be. There was no goblin sitting in the foot end and if there had been, it would have been hiding under the bed by now anyhow. He glanced down – no goblins under the bed, either. With a grunt he yanked the satin duvet off the bed, seeking to expose the enemy. Two needlepoint eyes in a roguish furry face peered up at him with a dignified expression of dismay.

He squatted down and looked at the creature. Some kind of weasel. Friendly, unrepentant, and quite miffed that he had removed its protection from the chill of the morning. "Well," he murmured. "It's my bed. Now where did you come from, little one?"

The ferret rolled on its back, curling back around itself so that it was using its own abdomen as a headrest and then folded its tail over its ears.

"Why, I do believe you just told me to shut up," he said good-naturedly. "I suppose you'll want the duvet back too?"

The Goblin King tucked the little creature in. It seemed completely at ease, if not right out indifferent to his touch. In fact, it ignored him to the point of rudeness. He laid down again, careful not to disturb his new bedmate, and summoned another duvet with a snap of two slender fingers. "I think, my dear, that I will call you... Princess."

Amanda grinned and showed her the page of the old sketchbook she was currently viewing. The drawing that showed traces of insecurity about perspective as well as the immense, focused detail of an obsessed sixteen-year-old. It depicted a man in full figure (with a small bookcase in front, feet are so hard to draw) wearing a foot-long black cape, posing arrogantly with his hands on his slender hips (and a bouquet of roses on the table concealed most of one hand because, dammit, it had just been so hard to get to match the first). He had a riding crop tucked into one tall boot, his white ruffled shirt revealed quite a bit of toned chest, and the black tights were way, way too tight. Blue eyes peered out under arched eyebrows and a quite fantastic mop of unruly golden hair. A smirk danced on thin lips.

Sarah blushed. "That's just an old thing," she said with assumed indifference. "Must be ages."

Amanda snickered and studied the drawing in close detail. She paid extra attention to certain details with shameless amusement. "Man, that's gotta hurt when he walks. How old were you when you drew this, fifteen?"

Sarah went from crimson to deep vermilion. "Sixteen, whatever. You were looking for a fairy, remember? I think that's a little big."

"Sure is," Amanda winked, ignoring her friend and co-worker's groan. "So who's Prince Charming? Some singer?"

"I don't even remember, I had a new crush every other week," Sarah lied. "Were you going to look at the fairy designs I made?"

"Yeah, yeah." Amanda closed the sketchbook. "Seriously, though, you should totally redo that and send it in. It'd make an awesome vampire."

The other woman nodded, red bangs bobbing. "Yep. Hot, nocturnal, sparkly. Twilight, eighties style. Get the twihards -and- their moms. Anyhow, can I borrow that fairy book? I'll see what I can make out, it's getting really late." She reached for her handbag.

Sarah let Amanda out of the apartment. Then she poured herself another mug of coffee before settling down at the desk again. The pile of sketchbooks was pretty huge – but of course Amanda had to pick out that old book, and open it on that old page. She sipped, cursed about scalding her tongue, and opened her laptop's lid. Wouldn't hurt to take a look at sparkly vampires for inspiration.

"These are great," Will announced, and pointed at the spreadsheets of fairy designs. "Feminine, cute, sexy but still pee gee thirteen. We'll definitely do a calendar with them. The poster, though, I'm not sure about."

"Too dark?" Sarah asked. She knew that having the dark cloak fading in with the dark background had been cheating. The early hours of the night had stopped being all that early.

Her art director shook his head. "No, that's fine. Dark and gloomy and sensual is good. But the hair is way too Twisted Sister and the make-up screams glam rocker, not vampire. Even if," he grinned, "you gave him Robert Pattinson's eyes and pout. The Vampire Lestat in concert outfit works great, though."

"If you crop the hair and lose some of the make-up it'll be perfect for a poster," Will said, commiserating. Being a digital painter too, he knew how much pain it often was, going back to edit a finished painting.

Sarah peered at the poster. The Goblin King, enhanced by the magic of Photoshop and her tablet, looked back at her, but with the brown doe eyes and little girl pout that could send a certain kind of teenage girl into a merchandise shopping frenzy. "God," she said. "I must have been sleep working. I am definitely editing that."

"Haircut, maybe a smile," the art director agreed. "Now, I like the autumn theme on this group here, but I was thinking maybe toss in some more leaves. Give you an excuse to flex that shades of red and yellow muscle – "

She nodded in the appropriate places during the rest of the conversation. If anyone had asked her what Will had been saying afterwards she would have had to confess that she had no idea. Her eyes kept straying back to that pout and those big, wet, brown puppy eyes. She was still thinking of them an hour later as she dodged through traffic. She was muttering about twi-hards and sparkly stalkers when she stomped up the stairs to her apartment. She was ready to strangle any unfortunate fairies in her path after she fed Bikkit the ferret and flopped down on her chair in front of the desk with coffee and a bagel.

"This didn't happen," she muttered while chewing. "I'm going to reorder time with a sledgehammer if I have to, that did -not- happen." She had gone from sledgehammer through a series of hardware upgrades that culminated with artillery shells at the time her kid brother turned up, letting himself into the apartment with the key he'd nicked from her months ago.

"Someone steal your lunch money, sis?" Toby grinned and threw his coat on a chair. "I haven't seen you this ready to kill somebody since last time you got a ticket for speeding."

"Will turned down one of your fairies?" He looked surprised.

Sarah shot him a gloomy look.

"Will turned down all your fairies?

He threw his hands up."Will cut out every single fairy, glued them to cardboard and turned them into office dartboards?"

"I'm putting more coffee on. I'll use it to bargain for my life." He poured water on the espresso maker. "Okay, a goblin ate your fairies. And your tablet. And your laptop. And your driver's license. Have you checked on Bikkit lately?"

"Toby, stop being a smart ass and get over here."

"I prefer being a live smart ass over here." He walked back to the desk anyhow. "Okay, what is it?"

Sarah opened the folder and pulled out the poster print depicting the disaster. "That."

The youth's eyes widened. "Holy shit. You drew that?"

"Yeah, but the face is totally wrong."

Sarah groaned. "Yes. But it was right when I saved it last night."

Toby took another look. "He looks like friggin' Edward Cullen. Are you going to use this print for anything?"

"Yeah, well, I figured Hoggle might get a laugh out of it." The youth walked back to the kitchen counter and poured the espresso. Holding one mug out he proclaimed, "Peace offering! No hurting the kid brother!"

She could not help giggling. "I'm not going to hurt you, you twit. I'm pretty sure you're not responsible for this... disaster."

"No. I'm killing it dead, with scissors." She clicked on the keyboard of her laptop and pulled up the Photoshop document. "This is what it's supposed to look like." The face on the monitor looked nothing like a Twilight character. It looked cold, arrogant, preening, and, well, like it should.

Sarah spluttered. "What did you say?"

"His Tightness. You know, His Royal Glitterness. The King." Toby pulled out the same old sketchbook that Amanda had been going through the previous day. "You got a whole book of drawings of him, remember? I know what he looks like. And if I should ever forget I have Hoggle reminding me often enough."

"I'm glad Hoggle's still looking after you, though." She sighed at the monitor. "He does look kind of funny and eighties, I guess. But he's still dangerous."

"I know, I know. Never go through the mirror, never pick up any crystal balls, never say 'I wish', stay on the path, look before you cross the road, brush your teeth before you go to bed, and chew your food thirty-five times."

He rolled his eyes. "I'm not twelve, Sarah. I know the rules. The worst thing that ever happened to me was Ludo beating me at Scrabble and that damn goblin who keeps stealing my socks. Please, not another sermon. I'm not hearing you, I hear nothing – nothing, tra la la." He clasped his hands over his ears.

"What did you just say?" Sarah put her mug down.

He ventured a sidewards glance. "No sermon?"

Toby took his hands down. "I was just trying to be funny. Are you going to print another copy of that?" He pointed at the monitor.

Sarah replied, "Maybe. Might just do something else. Start from scratch. I think I will."