Happily bonded and married to Spock after their second five year mission, Jim invites Bones to the Riverside farmhouse to spend the holiday season. Soon their farmhouse is filled with old friends. 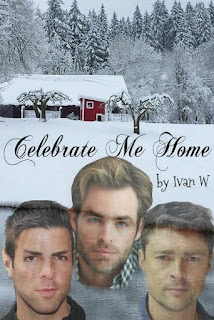 Home for the holidays,
I believe I've missed each and every face,
Come on and play my music,
Let's turn on the love light in the place

When he opened his eyes all he saw was a sliver of brown. He opened his eyes wider and the brown became eyes, deep rich chocolate eyes that morphed into a very attractive man with pale skin, sharp manicured eyebrows, and pointed ears.

“I beg your pardon?”

“The ears,” he mumbled sleepily. He licked his dry lips. “Water.”

A cup was held up to his mouth and his head held gently as it was tipped forward to allow him to drink.

“You collapsed in the cornfield. I discovered you there. I suspect that you overheated in the sun. I have brought your body temperature down by removing your clothing and immersing you in cool water.”

He realized then he lay not in a bed but in a tub of water. He blinked rapidly. “Did you-you took off my clothes?”

The man stopped, tilted his head. “What?”

“You must be pretty familiar with me to take off my clothes.”

“My husband? I think I would remember having a sexy elf as my husband.”

“Obviously the excessive heat has tampered with your brain. I am Spock.”

“Okay. Well it’s kind of cold in here now, Spock. Could I maybe get out of the tub?”

Spock stood up and reached down and scooped him up out of the tub and into his arms effortlessly.

He licked his lips. “What’s my name?”

“You have forgotten your own name?” Spock looked vaguely skeptical.

“That’s the way it normally works.”

That earned him a raised eyebrow as the one called Spock carried him from the bathroom and toward a bedroom down at the end of the hall.

The bed was already unmade, the covers having been pulled aside.

Spock eyed the bed. “Perhaps drying you off first would be wise”

“That’s not very spontaneous though. And it looks like you were prepared for me,” Jim said as Spock was laid down on the mattress. He supposed he ought to feel embarrassed being naked and wet in front of this elf guy.

“Yes, as I explained I am your husband.”

Jim smiled, unable to resist. “If you’re an elf, what does that make me? Santa?”

Spock stared at him. “That is illogical. Santa Claus was not married to an elf. And I am a Vulcan.”

Spock pursed his lips. “Jim, do we really have to continue this?”

“Not having any fun huh?”

“Role playing is not my forte,” Spock reminded him. “Can you not say you remember me now and the amnesia is finished?”

Jim chuckled as he pulled Spock into bed with him. “Okay, okay. But it was hot to have you carry me into the house from the cornfields. And from the tub.”

“I can do that anytime without the need for subterfuge.” Spock pressed his lips to Jim. “And now we can move on to the better part of your game.”

“Mm.” Jim stuck his tongue into Spock’s mouth. “How much time do we have before Bones arrives for his visit?”

“Oh great. We can do it two or three times by then.”

Spock nodded and pushed him deeper into the mattress.

Spock got off Jim and began to toss Jim’s clothes at him. “I do wonder why you invited him.”

“I thought it was Horatio.”

Jim sighed then laughed as he put his arms around Spock’s neck. “I love you.”

“As I love you. Let us go before he breaks down our door.”

Jim grabbed Spock’s arm and went down to prepare for their guest.

Spock had come to appreciate Leonard. By the time their two five-year missions had ended, he considered Leonard a friend. And he knew Leonard reciprocated.

Spock had three humans currently in his life that he counted as very close to him. Leonard was one, Nyota was another and, of course, Jim. Jim surpassed all, as he naturally would, being so much a part of Spock’s very existence. And he would do anything for Jim.

Including allowing their new found solitude to end in favor of Leonard coming to their home for an extended stay.

At the end of their mission—their last one by mutual agreement between them and Starfleet—there had been much discussion of where Spock and his mate would settle. Jim wanted to renovate and live in his family’s old farmhouse in Riverside and Spock had wanted to go to New Vulcan. They spent more than a month at a standstill.

Nyota had reminded Spock that he would never truly feel at home anywhere Jim was not and that had resulted in Spock going to Jim and tell him that he would accept Riverside. For Nyota had been right. He would not be parted from Jim.

In the end they’d compromised. A year in Riverside. A year on New Vulcan. After that, they’d see what they wanted. Where they belonged. Spock was only sure of one thing. He belonged with Jim, wherever his mate chose.

They’d only finished the renovations in October, near the middle of the month. They’d settled into their new home. Spock had been worried at first it would bring Jim too many unpleasant memories but it had not. Jim assured him that there were enough changes that it was like a new home and anyway, the place itself had never been at fault for what happened in the past.

Spock felt that they’d barely had time to find their way here when Jim had invited Leonard to come stay. And though it was illogical, he resented it some. After all these years he finally had Jim alone but not nearly long enough.

While he understood the reasons, the open-ended invitation to stay with them was not something Spock particularly appreciated. But Jim had made the decision without him. As though Jim was still captain and made all the command decisions. Definitely something he would need to discuss with his husband at some point.

But just now he followed Jim down their newly rebuilt staircase leading to the ground floor. When Jim stopped at the bottom, he shot Spock a grin that made the tips of Spock’s ears warm.

A loud knock rapped on the door.

Spock moved past Jim and down the hallway toward their front door. It had also been replaced. Jim had insisted on replacing it with a door that included an elaborate stained glassed window of the Enterprise flying through space.

He opened the door just as Leonard was about to rap his fist on it once more. He barely missed Spock’s face.

“It’s about time,” Leonard exclaimed. He glared past Spock to where Jim stood. “You too weren’t doing it, were you?”

“We were trying,” Jim retorted. “You got here early.”

Leonard rolled his eyes and pushed past Spock. “You’re always into the hobgoblin.”

Jim laughed. “Come on, Bones. Let me get you settled into your temporary home.”

At least Jim said temporary, Spock thought. He watched as they headed up the staircase, and if his gaze lingered on Jim’s ass, well, who could blame him?

He made himself busy making tea and eyed the coffeemaker wondering if Jim and the doctor would want their favorite beverage.

Before he could set it up, though, he heard the noisy footsteps of the two humans returning downstairs.

Despite Jim being his mate for nearly three years now, every time Jim entered a room Spock was in, his heart rate sped up. He’d tried to figure out why he was so incredibly illogical where Jim was concerned but to no avail. One time he’d even asked his father, thinking there was surely something wrong with him. Sarek had advised that his heart did the same thing whenever Spock’s mother entered a room, so that had been the end of that.

And it was something Jim was well aware of, whether through Spock’s body language or their bond, it did not matter. He went immediately to Spock and produced his two fingers toward Spock, who gratefully met them.

“You two are still at it, I see,” Leonard grumbled.

“Whatever,” Leonard sassed. “Aren’t you supposed to be over the kissing thing every time you’re apart for more than a minute?”

“Nope.” Jim leaned forward and kissed Spock on the lips. He then turned around and winked at Leonard. “You want something to drink?”

“You got any alcohol?”

The look Jim gave his friend was all sympathy. “Yeah we have. Coming right up.”

Leonard turned red and looked around. “Place looks great. Are we really going to have like turkey and stuffing in a couple weeks?”

“You and I, sure. We’re going to make acorn squash and stuff like that for Spock.” Jim stood on tiptoe to reach the top cabinet in the kitchen. It caused his shirt to ride up exposing his bare back just above the waistband of his jeans. Spock tried and failed not to look.

Leonard shook his head. “You haven’t changed at all, Spock.”

“Still ogling Jim every chance you get. I remember I had a running bet on the Enterprise with—”

“Bones, leave Spock alone.” Jim pulled down two glasses and a bottle of whiskey. “Besides Spock can ogle me whenever he wants. You don’t want any whiskey, do you, honey?”

Jim handed Leonard a half glass of the amber liquid. He poured one for himself.

“To wedded bliss,” Leonard said with only a touch of sarcasm as he held his glass to Jim’s and clinked. They both took sips.

Jim was staring at Leonard now, even though he had moved to stand very close to Spock. Admittedly, Spock found it quite pleasant that Jim rarely left his side when they were together. They both had come to prefer it that way.

Leonard sighed and looked into his drink. “I guess I will be. Never thought I’d be divorced twice.”

“Jim.” But there was no heat in Leonard’s voice.

“Well, she is. Who wouldn’t love you?” Jim went and gave Leonard a quick hug. “You’ll get through this and all this holiday shit, Bones. You will.”

“I know.” Leonard shrugged. “Are you sure I’m not imposing on the two of you?”

Spock opened his mouth but closed it when Jim nudged the bond just a little.

“Of course you aren’t. We love having you. You’re not a guest. You’re family to us, Bones. We love you.”

Leonard smiled for the first time since he arrived. “Thanks. Both of you. I’m kind of fond of you too. Even you, Spock.”

Spock quirked his brow. “Why thank you, Doctor.”

Leonard held up his glass toward Jim’s glass and Spock’s mug of tea. “To friends.”

“To friends,” Jim and Spock murmured in unison.

Then Jim leaned over toward Spock. “And to really hot husbands.” He kissed Spock.

Jim set his glass down on the counter and wrapped his arms around Spock’s neck.

Spock pushed Jim against the counter, his hands pushing up under Jim’s shirt to spread over his bare skin.

Jim broke the kiss to breathe, his eyes shining. He looked around. “What happened to Bones?”

“I have no idea,” Spock replied.