Claudy investigates the latest town on the traveling circus circuit, and makes a new friend. (now featuring art by the creator herself!)

I have no idea what I'm doing. Send help 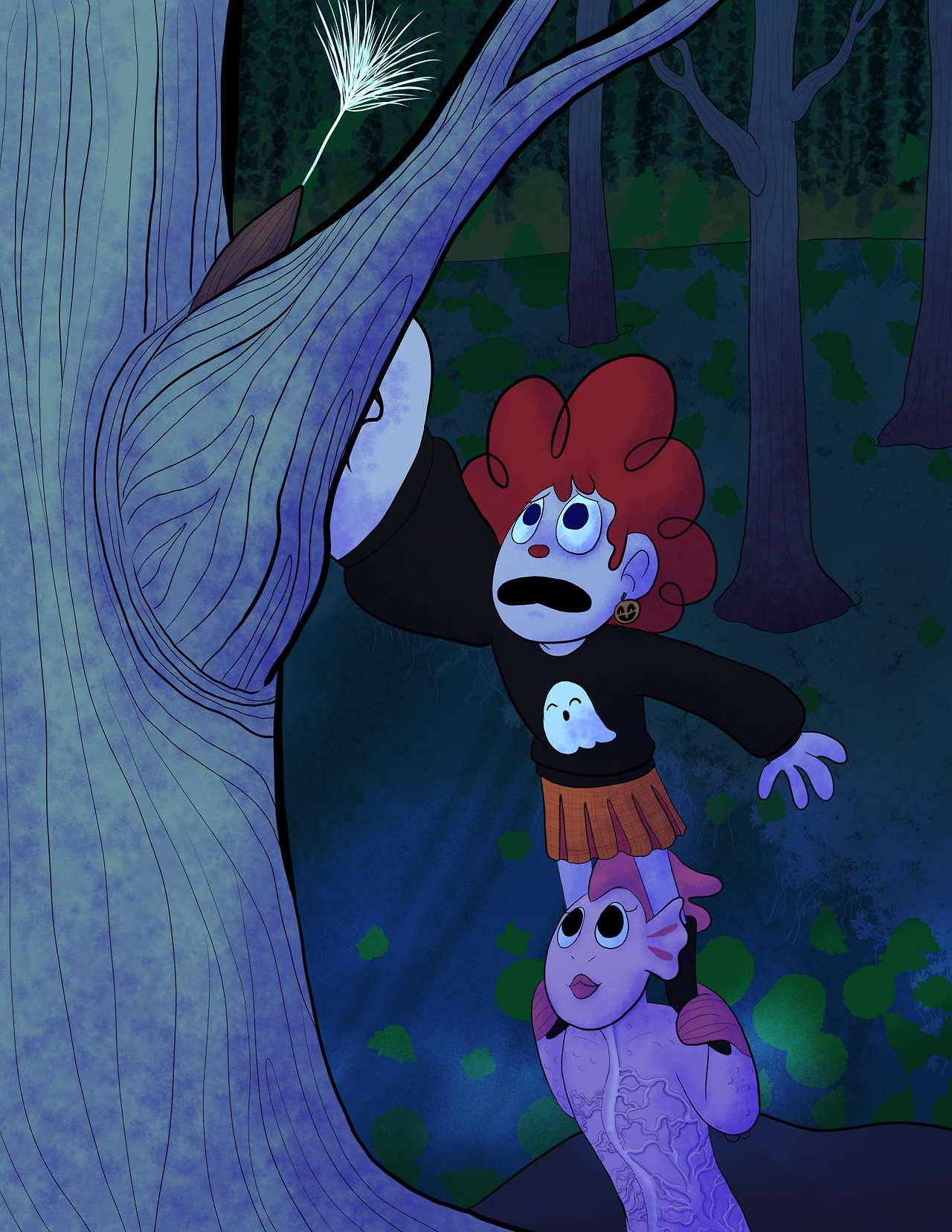 Created for the 2017 Spook Me Ficathon. The prompt I was given was the image "Last Kiss" by Hinchel Or, which you can see here.

A postcard came via fuzzy dandelion seed--"How do they even know where to go?" Charlie wondered, but Claudy snapped it up before he could investigate further.

"Claudy!" the postcard read. "Why didn't you tell me clowns celebrate Halloween? I would have made Mom let me go with you! I thought every day was Halloween for clowns."

"That's not very funny," Charlie said as he read over Claudy's shoulder. Claudy elbowed him off the bench and into the sand.

"Hope you are fine. I am too. You'd better write back. Just stick your letter in the seed and it'll find its own way back."

Claudy looked up at the seed, but it was already airborne, floating like a tiny cloud across the big blue sky.

"Stop that seed!" she said.

Claudy jumped to her feet and took off after the seed. It danced above the sandy beach, pausing for just a second at the side of a changing hut. But even as Claudy changed her trajectory, spraying sand over a pair of innocent sunbathers, the door of the hut opened, boosting the seed even higher.

"Red!" Claudy called as her sister hopped out of the hut. "Throw me!"

"What?" Red looked up from the big plastic chickens glued to the straps of her sandals. Their wings flapped when she moved.

"Throw me!" Claudy launched herself at full tilt into her sister's arms.

"Fine! Just throw me after that floaty!"

And so red did. Claudy soared through the air, tugging her hair down on either side so she'd fly faster. She flew closer to the seed, and closer... but then, just as it was coming into range, her flight took more and more of a downward angle. She let go of one handful of hair and flailed at the seed, but it was already too late. She dropped out of the sky and landed with a muffled BOOM. Sand blasted up around her and then rained back. High above, the seed twirled away on a breeze and was gone.

Red came up and leaned down into Claudy's sandy grave.

"We're gonna watch The Princess and the Bandit," she said.

"And you're gonna dress up as the Bandit."

Claudy stared up at the clouds. "Okay."

"And you're gonna sing all the songs when the Bandit does and when she carries the princess around you gotta carry me around too."

Claudy pulled her hair around her face so she couldn't see.

"Are you alive?" Charlie called down.

"Just making sure. See you at dinner!"

After a bit Claudy climbed out of the sandy divot. It wasn't like there was a lot to write to Rosalind about. The beach was fun, but not all that interesting. And the place where the circus had set up...

It wasn't far, just around the block. Claudy tried to shake the sand out of her hair as she crossed the street but it kept going down her dress and was incredibly itchy. She could see the park now, tucked behind the Pike's Peak Fish Market (despite its name, the Fish Market did not serve fish. Well, it served fish, but it only sold things to them, it didn't sell them itself, and...)

The circus was mostly set up now. Pascal was putting the final touches on the big top, and Ron was carrying the lion cage, lion and all, to the animal tent, and Aunt Penelope was sitting at a picnic table with the poodles at her side, looking vaguely disgusted in everything and everyone. It was starting to look like home.

At that moment she caught sight of Red walking along after Ron, carrying the seals in their seal tent. Red glanced in her direction and held up the special edition DVD of The Princess and the Bandit.

Maybe she'd go for a walk before she went home, Claudy decided.

She headed back the long way around the park, which backed up against a bunch of straggly trees and what looked like the biggest swamp the Clown Princess had ever seen. As she walked she tried to think about how she'd describe it to Rosalind--on puppy stationary, sent through the mail and not by dandelion seed.

"We're in Troutronto," she imagined writing. "They don't celebrate Halloween. They have this holiday they call Swampoween, which is kind of like Halloween except instead of candy you get live bugs and little fun presents and instead of costumes everybody wears pants, I guess because the fish people don't usually wear pants. Sorry this didn't come by air. I couldn't catch the..."

She saw it up in the trees, still trying to float away but very much caught in the branches of the tree. That was great! All she'd have to do was climb up and grab it, and...

The park disappeared very suddenly and now she was stepping off a ridge into the swamp.

"Drat," she thought, and fell face first into the mud.

She wondered if this was her new thing now, unintentional pratfalls. At least she'd never have to play the straight man again.

Claudy struggled up onto her knees, mud all down her front, and found herself looking into a big scraggly cave. Stalactites and -mites jutted down and up respectively, and in the mud on the cave floor a face was looking up at her.

"Are you okay?" the face asked.

Maybe she had mud in her eyes. She rubbed them with her sleeve, which only made them more muddy. When she flailed around enough to get some of the mud off, she saw the head was rising up now, and it was connected to a torso and a pair of arms that were holding it up.

"You really biffed it," the face said.

"Claudy. I live with the traveling circus next door."

"I'm Karla," the face said, although it didn't sound very sure of that fact. "Well, if you're okay, I'm gonna go." They started to duck back down into the mud.

Karla stopped with just their eyes still peeking out.

"That seed up there..." She pointed up where the dandelion seed was still diligently trying to make its way through. "Can you help me get to it? It belongs to a friend and I want to make sure it gets back to her."

Karla looked up at the tree. "I don't climb."

"You don't have to climb. Maybe you could help me up on top of your cave there and I can reach it from there?"

"I have a better idea," they said, picking themself back up out of the mud. "Why don't you stand on my shoulders and I'll lift you up so you can reach?"

"Are you sure?" Karla looked awfully skinny, and kinda slippery and pink too, like maybe she was a salmon person. She wasn't sure if a salmon person could lift her up without hurting themselves.

"Sure I'm sure." Karla squared her narrow shoulders. "Hop on."

So Claudy did, and suddenly Karla was standing up straight. Claudy waved her arms around, trying not to fall, and tried to look down to see if Karla had a tail or legs.

The dandelion seed was much closer now. She reached out as high as she could and stretched and tried to stand on her toes, but still she couldn't reach, and her feet slipped and she sat down hard on Karla's shoulders.

"Did you get it?" Karla asked.

"No." She sighed. Maybe Charlie could get it for her, since if she tried she'd probably fall out of the tree and get covered in some other kind of dirt. "I guess it isn't that important."

"If it's for your friend then of course it's important."

"No, it's fiAAAAAAAA..." Suddenly they were shooting up. The dandelion seed was right there and she reached out and grabbed it and then wrapped her arms around Karla's head so she didn't fall off. Now would probably be a good time to not look down, she thought, and looked down.

But she didn't see the mud, or the swamp, or the ground. Instead she saw the cave, just as it had looked when she'd been on the ground. It was facing up at the sky now, and Karla was sticking right straight out of it. She didn't have legs and she didn't have a tail. She was connected to it like a... tongue?

From up here it was obvious now. The cave wasn't a cave. It was a head. And Karla wasn't a fish, or a person of any kind. They were the cave itself. On either side of their head was a big rosy eye, looking up at her.

"It's not really a present."

"Oh." Karla sounded a little disappointed. "Won't she be sad not to get a Swampoween present?"

"No, she doesn't celebrate Swampoween."

"It's my favorite holiday," Karla confided.

"Do you want to watch a movie?"

PattRose as well as 4 guests left kudos on this work!