Problems with Narrative Structure and the Rules of Manly Engagement [+Podfic]

"There were easily six hundred people living in the Paramount building in downtown San Francisco. That was a lot of neighbors to get to know, but it only took a single day of living there for Sirius to notice Remus."

Thank you to my beta reader, actual living treasure, ForeverShippingJohnlock

Chapter 1: Introduction of the Problem 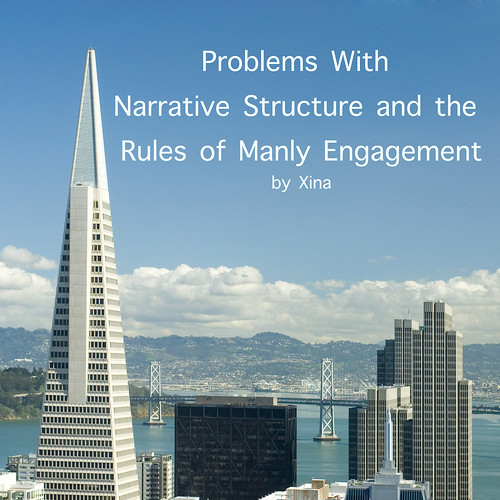 There were easily six hundred people living in the Paramount building in downtown San Francisco. That was a lot of neighbors to get to know, but it only took a single day of living there for Sirius to notice Remus.

He knew his name because he read it on one of the pieces of mail Remus was holding in the elevator. Remus held the door while Sirius struggled with a large potted plant, a housewarming present from James and Lily. Sirius thanked him and let him press the button for the fifth floor. He spent the regrettably short elevator ride trying not to stare.

Sirius was used to being around beautiful people. When you lived in a city of nearly a million people, statistics offered the certainty of bumping into at least one picture-perfect person a day, but Remus was unusual. He matched himself perfectly, as if someone had planned him that way. His hair and eyes were exactly the same shade of rich, warm brown. His freckles, which were spread all over his skin with remarkable randomness, were also that color. He was white, but his skin had gentle yellow and tan undertones instead of the harsh pinkness many white people suffered from. It was the perfect contrast for all of his lovely brownness.

Even his glasses were the same honey-brown. Sirius sighed with satisfaction when he looked down and discovered that Remus’ shoes and the leather band of his watch matched too. Those were conscious decisions. Remus had taken something most people would consider boring, a nondescript shade of brown, and embraced it.

"This is me," the gently rounded frames and simple leather loafers seemed to say, "and I don't mind it."

Sirius, whose Philippino parents had gifted him with skin in exactly that same shade, couldn't help but notice how well the two of them matched each other.

It was just a chance encounter. In such a large building, they might never have seen each other again, but it seemed they also shared a certain regularity of schedule.

Sirius worked an early shift, and he made a habit of alternating days swimming laps and time in the gym once he got home. He didn't do it to be fit, although that was a nice bonus. He liked the rhythms of exercise, the predictability and control. After the crazy stress of being at work, he needed something like that to bring him back down.

He became even more committed to his routine when he realized Remus swam nearly every day and afterwards spent hours on the sun deck, in the sauna, or in the hot tub. Remus would go to whichever spot was the warmest and lounge there like a smug, gorgeous cat. Even on the days he didn't swim he still showed up, relaxing in the sunshine in loose pants and comfy sweaters instead of a swimsuit. Sirius didn't usually sit around after working out, but, after noticing Remus’ example, he began to let himself enjoy the warmth of the sun.

He didn't have high expectations. That wasn't practical for a gay man in a world full of straight people. But he had long ago mastered the art of platonic aesthetic appreciation, it being a necessity if you wanted to survive a friendship with James Potter. He wouldn't have minded developing that kind of friendship with Remus, but how to go about it was a bit tricky. Straight men could be so fragile.

For example, he couldn't just plop himself down in an adjacent lounge chair and start chatting. There was a whole sun deck full of lounge chairs, and to sit directly next to each other when there were other options was a manly social taboo, like peeing next to each other in the bathroom when there were other stalls available. He might as well paint "Building Weirdo" on his forehead. It would be perfectly acceptable to sit next to Remus if the other chairs had been taken, but at that time of day the pool was usually deserted. Most people were still at work, and those old enough to be retired seemed to prefer the morning hours. Actually, hardly anyone seemed to use the pool or the sauna at all. It was amazing how collectively boring six-hundred-plus people could be.

So for a long time Sirius wasn't sure what to do. But then the season began to change, and he realized the sun was on his side. As fall progressed, the shadow of the building across the street put all but a couple of the lounge chairs in the shade.

"Do you mind?" Sirius asked with maximum casualness, gesturing to the chair next to Remus. "For a sun deck, there’s not a lot of sun, huh?"

"Go ahead." Remus shrugged and waved him on, but he pointedly turned right back to the notebook he was writing in, not inviting further conversation. Sirius didn't let that get to him, but he didn't say anything else either. He had already taken a risk. Remus would have to be the one to make the next move.

Unfortunately, Remus didn't, not that day, or the next, or the one after that, although Sirius continued to make himself available by sharing that small patch of sun. As the days of this highly convenient season passed, he almost got used to the sight of Remus lying shirtless in the sun, or soaking in the spa with his freckled arms held high to keep his book out of the water. Remus was always either reading or writing in a series of bound notebooks. Sirius liked to read too, and he saw a lot of familiar titles in Remus’ hands. It was very encouraging. So one day he brought his e-reader to the pool in a show of solidarity, hoping it would give them some excuse to start a conversation.

Remus did notice the reader, but he just put his own paperback in front of his face without commentary. Sirius realized his mistake. Remus always read paper books: crisp mass market paperbacks, large hardcover volumes, or vintage books that had been read so many times they were falling apart—but Sirius had never seen him with an e-reader.

Remus didn't seem to use devices much at all. Sirius had only ever seen him with his phone a couple times. It was an old fashioned flip phone like Sirius had had in high school. It didn't even have a touch screen. Maybe he was some sort of technophobe. That should have been a turn-off for someone who had what he considered to be important relationships with his many electronic devices, but this difference between them only made him more interested.

Even if Remus wasn't a technophobe, Sirius' plan had obvious flaws. Remus couldn't very well start a conversation about a book when he couldn't see its cover. Sirius tabbed out of his current scifi novel and ordered the corresponding paper book. He was pretty sure Remus would find this book interesting. He might even have read it already, and then he would naturally want to talk about it. It could work.

The next day he brought the only paper book he had in the house, which was The Sound and the Fury. That would have to do until the books he was actually reading were delivered.