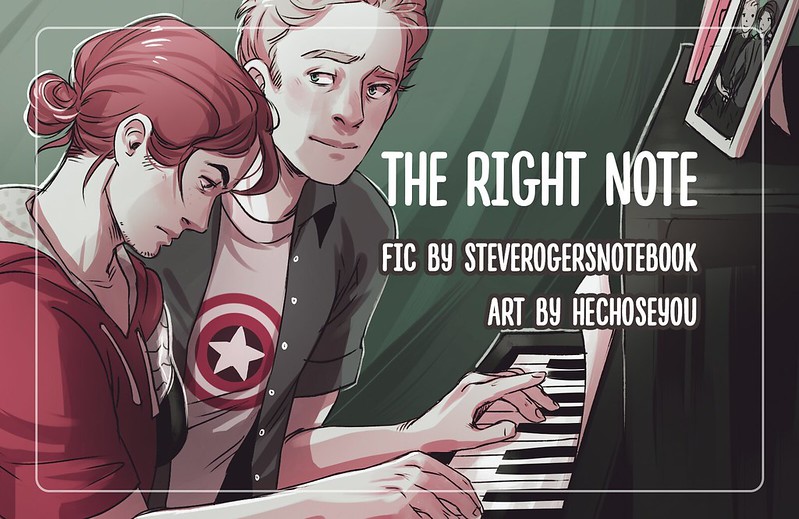 Steve's memories of Bucky playing piano in late era speakeasies and early era underground clubs give him hope that the instrument and his own helping hand can bring some of the joy back for both of them when Bucky is recovered from cryo. When Bucky is reminded of stolen kisses, he can't help but think it's too much to hope for.

Steve made a last minute walk-through of the apartment, ensuring that everything was ready for Bucky’s homecoming. After months living in the Wakandan medical center, allowing for Bucky’s slow, healthy recovery from cryo, as well as from the removal of Hydra’s trigger words. Bucky had opted to stay in the facility for extended mental health care following advice from T’Challa’s finest specialists.

Bucky told Steve that he wanted to follow all of their recommendations, and Steve was glad to hear it, even though sometimes he felt it might be an effort on Bucky’s part to prolong being back in close quarters with him. He never voiced that suspicion, because it was a negative thought that wouldn’t add anything to Bucky’s recovery or their relationship. Suspicions aside, Steve had learned quite a bit through the joint sessions preparing them to live together.

When Bucky’s release was scheduled, T’Challa had asked Steve to provide his staff with a list of anything he and Bucky thought would make them comfortable while Bucky worked with his specialists on developing a replacement arm, taking into account the time needed for the orthopedic and neurological specialists to map out the attachment methods. “After all, the development will take time, and his recovery will add to that time.” As far as Steve could see, their accommodations were now perfect with the list of books Bucky had requested tucked into the bookshelves, and a piano on the wall opposite the wide expanse of windows.

Of course Bucky hadn’t requested the piano, that was all Steve. Back when they were kids, a day didn’t go by without Bucky playing a song or two. In fact, Bucky couldn’t walk past a piano without picking out a quick tune and it was usually hard to drag him away. Steve wanted that option available to Bucky if he were interested again.

Steve stopped at the piano, looking at a photograph of the two of them before the world had changed. He ran his fingers over the glass, touching both baby faces. Steve and Bucky as teens, stood grinning in front of a piano in one of the better clubs.

At the tender age of fifteen, Bucky had been a damned good pianist and was in demand at several pretty seedy establishments and a few decent ones as well. That year brought in more money from tips than they’d ever imagined.

To get in, they had to sneak in under the guise of delivering produce or other legitimate goods to whatever cover business the proprietor used as a front. Steve would sit in the corner behind the piano, either reading or watching everything, and drawing what he saw as people drank, danced, fought, and lived. They’d both successfully ducked no less than six raids. Months after prohibition ended, taking with it the necessity of the speakeasy. Bucky’s talents were called upon again when one of the owners of one of the former speakeasies opened up to a different kind of clientele.

A singer from Bucky’s speakeasy days had hailed Steve on his paper route one day, “You’re the guy who’s friends with that piano player, right?”

"Yes ma’am.” Steve had said, remembering her very well from her voice and her powerful presence. He’d sketched her on many of those nights while she sang.

"Has anybody snatched him up? Is he still playing?”

“Steven, would you do me a favor? Please tell him that if he’s up to making some money, I’d like for him to be my accompaniment when I perform.”

And that was how they got their foot in the door of an underground gay  club; and how they both found out that ‘this feeling’ they shared was a thing that many other people felt, and not an ‘abomination’. The kind of environment where Steve had it reinforced that there was nothing wrong with loving Bucky. Those who were wrong were the ones who thought that their opinions were better, those who felt they were more powerful and loved to abuse their power. When the police raided these clubs, the men would dance with the women and they’d keep each other safe. 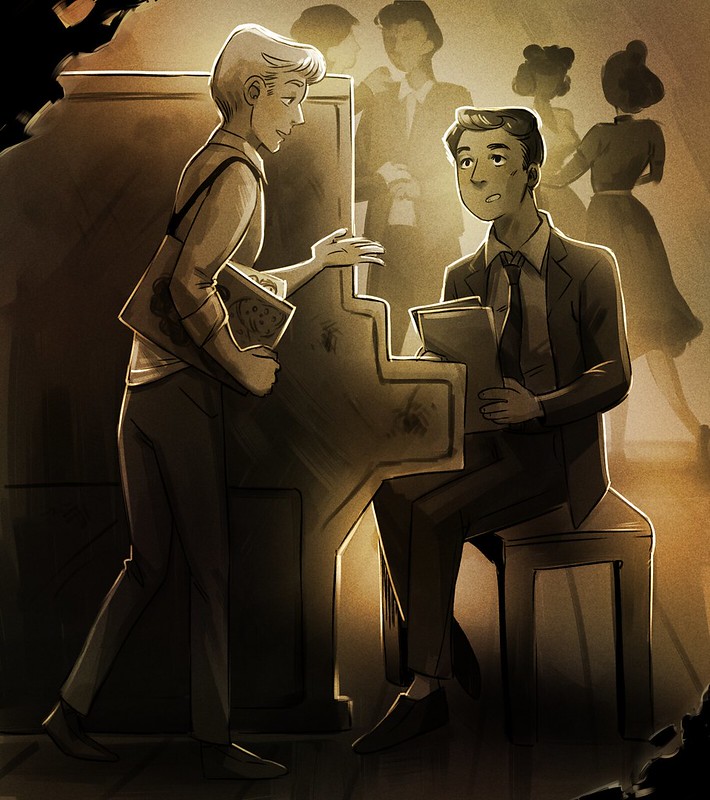 The text message on his phone brought him out of his reverie, “Well are you coming or not?”

Steve smiled at the demanding text message from Bucky. “On my way.” He shot back.

Their relationship was nothing like it had been in those days, and as much as it pained Steve, he was going to try to accept that being friends was ok. It was more than he’d been allowed for decades, so it was still good.

Standing at the door with his jacket in one hand and the doorknob in the other, Steve had the thought that Bucky really had a surprise in store for him if he expected this apartment to be anything like the one they’d shared before the war, or the one he’d been uprooted from in Bucharest.