Exactly why Dorothy went to the purgatory? Jack is slightly dark (It's a horror game, of course only our character is "light"). I suppose this is Dorothy/Sue, however abusive such a relationship seems to be. 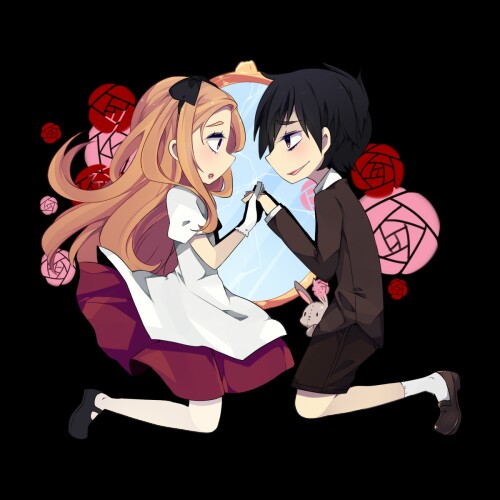 When he hovered over the beautiful manor, he was not expecting it would be more than a quick foray to spread his snow in the garden. He was surprised to sense a familiar suffocating presence of a demon.

Grasping the window binds on which his frost quickly infected them and stopped their movements, he saw a dark haired boy staring right at him. The startling clarity of demonic eyes prevented any hopes in his chest to rise and think that this was one that believed in him. Jack stared right back in interest, and the demon child must have sensed his harmless curiosity and turned his dim purple gaze away in interest for the little girl in front of him. She had long pretty hair in shiny red, but she was obviously nothing more than human.

Only seconds after Jack's discovery the girl turned around - revealing a pair of shiny red eyes filled with determination - and ran back into the house; at the same time, the boy turned his back and covered his eyes. Jack flew closer to him, and heard that the child was counting up.

Jack landed on the newly frozen garden as the boy reached to ten. The child gazed back at the house, before focusing on Jack. His eyes were calm, and his smile reflected that too. "Hello. You must be an ice demon."

"Nice guess, but no, I rule over winter. I prefer to be referred as a spirit, thanks. I'm Jack Frost. You're playing hide and seek with that girl?"

The boy nodded. "She found me. It was quite unexpected. I didn't exactly built any stories she would need to believe in to see me. I gather that she must be one those rare ones that believe in just about anything." His purple eyes began to shine slightly and then it dimmed again as he smiled politely. "Sorry, where are my manners? I'm Sue."

Sue was amused when Jack swiveled his head left and right to check any new apparations or changes in reality the second his eyes glowed. It was a rather common knowledge (even humans got it accurately) that demons' eyes glow when they actively use magic. Jack's head snapped towards the general direction of Dorothy's manor when she let loose a little scream. The winter demon locked eyes with Sue's again. "And here I thought I met a nice demon."

"It's just a little scare to spice up the hide and seek. Dorothy is not dead." Sue hummed. "Is there such a thing as a nice demon?"

"Of course there is. I met some. The animal fairies for one were nice to me."

"A kitten and its owner are in danger of drowning; they'd save the former rather than the latter."

Jack thought up another one to list. "Mother Goose."

"Giving grounds for parents to pour ice-water bucket over their children's heads when they tell them the world is actually not that pretty."

Jack scoffed. "That's too farfetched to earn you a point. What about Santa Clause?"

"Who is he to judge children's moral values? Do you know how devastated some children can be when they receive coals? They think it's a confirmation that they really are good for nothings."

Jack shrugged. Sue could see he agreed with him too. "Well… I fancy myself as a nice spirit."

Sue was a little disappointed that it didn't rile the winter demon. The immortal teen just smirked. "So you do know me."

"For the record, I ease their passing by numbing them. I don't cause their deaths. I quite dislike knowing they're in pain."

"You need a stranger to admit that you are actually nice?"

"Hmm. Nah. Nice are subjective anyway. I should leave now. More places need to be snowed. Bye, Sue," Jack smiled at the air and in an instant the Northern wind picked him up.

Jack's flight stopped a second later. "Wait, what demon are you?"

"Ah, well. It's nice to meet you, anyway." Jack cheerfully said and flew away. Sue took a moment to envy Jack's bond with the wind - as it was the one way that let a demon (spirit, fairies, ghosts, creatures, apparation, whatever other nicknames they have) able to travel the Earth constantly with no need to rest such as one with telekinetic or flight abilities.

Sue put away his meeting with Jack out of his mind in favor to the game. He lifted his left arm and saw that it had been seven minutes. Dorothy would probably have escaped from the manor by now. He had only made the library's books to try chasing her to her bedroom. Feeling inexplicably sad Sue laid down on the snow covered ground to inspect at the watch Dorothy had given him as a thank-you gift. Dorothy rather hates him now, and it saddened him more than he expected. He liked her, as much genuine as whatever that emotion can come up with, being that it's only because she's the only one he interacted with directly. He mainly hear things outside through his creations' ears. He'll have to go to purgatory and find Dorothy's parents and her two maids amongst the sea of dead souls there to bring them back. It'll be tiring but, a deal's a deal. Sue sighed.

After a while, Jack's snow failing to freeze him to death, as he was a demon, Sue left the garden and went back inside Dorothy's home. He'll need to use items Dorothy has that were memorable gifts from her parents and maids, and he knew for one thing that she either put them under her pillow or in her wardrobe.

The house was empty. It was rather normal save for some mess he created to give Dorothy scare jumps, and the fact that he knows there were four empty bodies just lying bloody somewhere, waiting for Dorothy to win the game.

Sue came upon the room, chilled by the air conditioner on full power and the snow sneaking inside the room from the open window. A glance on the bed was enough to see that there was no item on it, not even the pillow. A look inside the wardrobe… revealed Dorothy.

For a moment, Sue was stunned by surprise. She was… clearly not asleep. His fingers found her face to be very cold and he slowly traced her pale blue lips. Her arms were stiff, frozen in a position to hug herself and they invited Sue to give her corpse a hug too. A grin curled on his lips and he absently wished her beautiful eyes would witness it. She's dead. Dead from the cold. Obviously hiding from the books he sent to chase her and either got herself stuck or fell asleep from the fatigue of running around her huge manor for thirty seven hours, impressively ignoring the horror of her families' bodies laid bare in hopes that she will bring them back to life by winning against him. He felt joy that she lost, that he won and wanted to laugh happily. Smiling down at her he bestowed Dorothy a pointless kiss on the lips, before leaving the world to the purgatory to play more hide and seek with Dorothy.