"Fairview was the finest friend a man could have, and the finest battle-companion. I dared not risk doing anything that might break our friendship."

On a hot summer's day, on a high hill surrounded by the enemy, the best battle-companion can turn out to be the truth.

Rook and Fairview have worked alongside each other for years, first as officers in the navy, then as officers on a steamship, and finally as colonels in an invading army. Members of a nation where tiny differences in rank are considered all-important, the two men defy convention by treating each other as equals.

But now their life-long bond is about to meet its greatest strain, when they are ordered to seize and defend a hill whose landscape is unknown, in the company of soldiers who may be incompetent or treacherous. Will Rook and Fairview's friendship remain by the end of the battle? Or will their lives take an unexpected detour as they struggle to survive on Spy Hill? 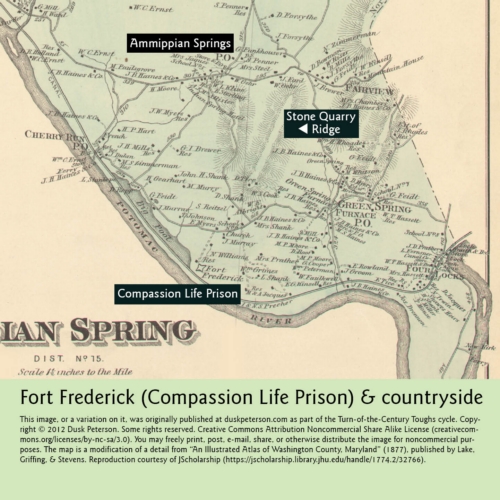 Chapter 1: We Won't All Be Coming Back

Words spoken by the field-cornet of the Mippite forces at Spy Hill, to his soldiers before the battle:

"Citizens of the republic, we're now going in to attack the enemy, and we won't all be coming back. Do your duty and trust in your gods."

It was the incident with the white spaniel which gave Fairview and me our first hint that we hadn't been total blockheads to bring along Doyle.

I have to explain that we hadn't yet reached Spy Hill. Between Spy Hill and our camp to the west lay farmland. We'd marched through the farmland practically on tiptoe, hidden by the mist and the night and our own efforts to suppress all sound. We held our breaths when we reached Big Pool Road, which runs from southwest to northeast, parallel to Spy Hill. There was no way to avoid the road; going any further south or north would bring us up against the encampments of the Mippite soldiers. So our two lines of troops marched ever so softly across the road lined by Mippite farms, any one of which might sound the alarm and spoil our surprise attack.

It didn't help that the night was so black that we couldn't see our hands before our faces. I'd already spent three hours searching for one of my companies that had lost its way. By the time I arrived back, the rest of my men had fallen asleep, exhausted from the week's battles. Waking them had taken yet more time.

Now the moon was out, lighting the white mist around us. It was when we were just past the farmyards, and barely beginning to let out our breaths, that Doyle decided to have a chat.

"Bloody stupid way to attack the 'siegers of a fort," he announced to me cheerfully. Even though the mist dimmed the moonlight, I could see the outline of his slumped shoulders and could imagine his scowl. "The Mippite soldiers are camped on top of this hill, while the fort is miles away, so what're we doing scrambling over rocks in the middle of the night? It don't make no sense. All of us fellows say so. But you officers, you don't pay us no mind. Nobody wants us enlisted men around – we know that."

"All of us fellows" were Doyle's perpetual, invisible backing for his grumbles. It wasn't Doyle's grumbles that bothered me; I'd learned to ignore them long ago. It was the fact that he was voicing them aloud.

He'd at least had sense enough to whisper; otherwise, I've no doubt that the other soldiers in my battalion, all of whom were on edge, would have jumped on him in a heap in their eagerness to be the first to gag him. But I'd made the mistake, at the beginning of this night, of telling my men that they could whisper a quick word to me during our attack on the hill "if it's important." I'd forgotten that Doyle held a different definition of "important" than the rest of the world.

To jump on Doyle myself, satisfying though the act might be, was unfortunately below the dignity of a colonel. I gestured to Canton, my soldier-servant, but he was busy looking nervously at the cows we were passing. The cows watched us go by without emitting a single moo.

"So what me and the other fellows say is, this ain't no way to run a war. Cramming us all into them tiny boxcars, making us swim across a right big river, then ordering us to wriggle on our bellies for a mile or three. It ain't natural. It ain't dignified. See, me and the fellows got our standing to think of. We can't be acting all low, or the fellows in the 1st Ninth will be all after us—"

"Doyle." It was the colonel of the 1st Battalion of the Ninth Landstead's Fusiliers; he had been marching at the head of the line of soldiers nine yards away from ours. The fact that he had been able to hear Doyle at that distance was a bad sign. He leaned over and whispered to Doyle, "If you do not remain silent until we win the summit, your colonel and I will rethink our promise not to chain you and throw you into Balmer Harbor." He gave Doyle one of his pleasant smiles.

"You don't got to be like that." Doyle sunk into one of his sulking tones. "We fellows know when we ain't wanted." Then he fell back into his place in my line and was mercifully silent.

I gave Fairview a smile of thanks. He whispered in my ear, "We should have drowned him before we let him come on this expedition."

I began to snort with amusement, then caught myself in time. I gave him the slight shove that had meant – ever since we were boys – "We'll talk later, the grown-ups are listening."

But we were too late. The General had fallen back. I could hear his glare as he said, "Did I, or did I not, give orders for absolute silence during this attack?"

His voice was far louder than Doyle's had been. The cows we were passing stirred restlessly. My own men stirred even more restlessly at seeing their colonel reprimanded in public.

"I'm sorry, sir." I knew enough to confine my reply to a whispered apology.

Fairview, though, tended to lose his common sense when I was the one being reprimanded. "Sir, one of Colonel Rook's men—"

"Colonel Rook is responsible for the actions of his men." The General raised his voice further. I wondered at what point Colonel Tice, who was assigned the job of guiding our force up the hill, would fall back and join the dispute. A cow, nervous, backed into the cow behind her.

If this continued, we'd have a stampede on our hands soon. I was struggling with a way to speak up to the General – Major-General R. Talbert Pentheusson, son-in-law to our Commander-in-Chief, and the youngest man of his rank in the Allied Armies of the Dozen Landsteads – and tell him that he should shut his bloody mouth and let more experienced veterans of older wars handle matters he was incompetent to handle . . . But of course I couldn't say anything like that. So I tried saluting silently, hoping he would follow suit where silence was concerned.

I don't know whether he would have, for at that moment, we heard the white spaniel.

Perhaps it was a child's pet, though it was large enough to serve as a watchdog. Certainly it seemed to feel that this was its mission. It was yipping at the top of its lungs, darting in to nip at the heels of my men, then dashing away and yipping some more.

The cows looked ready to flee. The farmhouses were still close behind us.

"Shoot him," ordered the General, sounding understandably concerned at this turn of events.

I refrained from reminding him that our rifles were unloaded, by his orders. Instead, I pointed out the reason for the empty rifles: "A rifle-shot would wake the locals, sir."

"Well, bayonet the cur, then! Do something!" The General edged out of the way as the dog tried to nip at his heels.

One of my soldiers – Lexington, I think it was – threw a rock. It missed the dog and hit the General squarely on the thigh. Amidst the General's far-too-loud curses, Doyle darted forward.

"I'll take care of this," he announced to all the officers present. "Here, girl. C'mere, girl. That's a good girl."

I didn't ask him how – in the darkness and the mist – he could tell that the spaniel was a bitch. The spaniel, half-hidden in the fog, had paused and was staring at Doyle. Then she made up her mind and trotted happily up to where Doyle crouched, his hands outstretched.

Doyle fondled her ears; she consented to this, blessedly silent. Fairview, always quick off the mark, had obtained a bootstring from his soldier-servant; Doyle gently wrapped the string around the dog's neck and led the little guard away, making soothing noises to it.

"Fine," said the General, huffing his frustration. "We continue. Colonels, make sure your men are silent from this point forth."

I could still hear Doyle crooning at the dog in the distance. I declined to make any promises. The General walked forward, muttering about insubordination.

I exchanged looks with Fairview. He leaned over and whispered, "Maybe we could toss him in the harbor."

I suppressed a roar of laughter that would have awoken every Mippite within cannon range.

caraca1, DystopiaEm, nivo, and tailor31415 as well as 3 guests left kudos on this work!