Niijima Makoto is tasked to take down the Phantom Thieves. Spoiler alert: She gets her heart stolen. — Police!Makoto. Akira:Makoto. 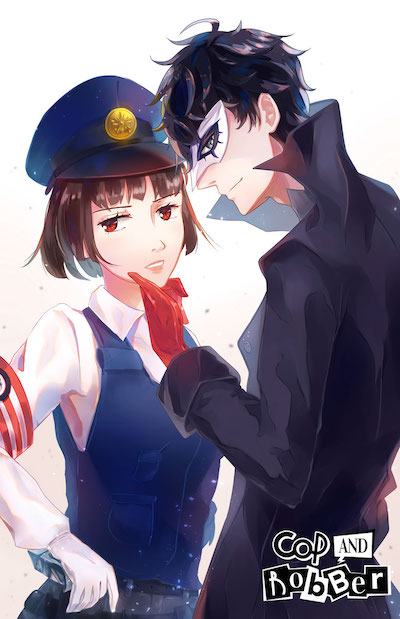 A sixty-hour stakeout in this stinky backstreet of Yongen-jaya, and they hadn't seen even a hair of their target.

Makoto's lids were heavy, her spine was sore, and the summer heat raging against the half-broken air conditioner wasn't doing any favors. Crumpled McDonalds wrappers decorated the floor at the feet of her current assignment partner, Sakamoto Ryuuji, who was making his presence known through loud consumption of an 8-piece Kentucky Fried Chicken.

"Sakamoto," she said tersely, "clean up after yourself, would you?"

"First time I've eaten all day, Niijima. Give me a break."

Makoto rubbed at her aching temples.

She grimaced. "Then grab me some coffee when you're done. I need to wake up."

"For the record," said Ryuuji, "I've gotten coffee like... five times for you. Isn't it high time for you to get your own?"

Coffee was the only thing that could keep her going through insufferable cases. This being one such case. "I'm technically on shift and you're technically on break. I shouldn't leave this car."

"Seriously, Prissyma. There's a damn café right down the road. I think it's called Leblanc."

Prissyma was a not-so-affectionate nickname that she'd picked up since her days in the Academy. Makoto did her best to ignore it.

"Go get a cup. I mean it, Prissyma. Perp hasn't been out in sixty hours. Five minutes more ain't gonna hurt."

She paused and considered her options with a very long sigh.

She left the car.

Leblanc sounded presumptuous because of its French roots. It sounded like a five-star restaurant with pre fixe meals and foie gras and black sesame brûlée, with all fish freshly caught and all vegetables picked that morning.

The place was cozy, every square space packed with booth seats and tables and equipment according to optimal efficiency. The stained glass lampshades suspended over the lacquered tables looked like they had been acquired from a second-rate thrift shop. Certain parts of the café stood out like a sore thumb, such as the tenderhearted mother painted delicately on a framed canvas.

It was, in a word, an outsider. Makoto liked it very much.

The barista glanced up at the sound of the entry bell. "Welcome to Leblanc," he said placidly, then paused. "Oh."

She stepped to the counter. "Iced Americano, largest size you've got. And a chai tea latte, extra sweet, medium."

The barista's long, slender fingers gripped the card with surety. The fingers led to a corded forearm that was much too muscular for a full-time coffee brewer. The forearm led to squared shoulders, which led to an angular jaw beneath a head of unkempt dark hair.

Under a night of proper sleep, Niijima Makoto would never have been fazed. Appearances were appearances. People were people. Appearances changed nothing about people. In fact, more often than not, they were deceptive.

But Niijima Makoto was not under a night of proper sleep. She was under sixty hours of stakeout in a cramped car, living off of nothing but fast food and soft drinks with no shower in sight. She was tired, she was irritable, she was vulnerable.

And this was an exceptionally cute barista.

Self-conscious, she slid the nearest menu in front of her face.

It was an alcohol menu.

'Don't drink on stakeouts.' That was the most common of common sense in the police world, second to 'Don't point a gun at someone you don't want to shoot.'

But she was already standing out. She couldn't afford to hide her face behind an alcohol menu, only to follow it up with a claim that she wasn't interested in any.

"I'll give you a discount," said Cute Barista. He seemed amused. Vastly amused.

"What?" she blurted. It was a mistake. She was losing her cool in front of an ordinary civilian. She took a moment to still herself. "A discount? Why?"

"Because you're cute," said the damn Cute Barista.

He was playing with her. He knew. Somehow, he knew she couldn't drink.

It didn't stop a blush.

"I really shouldn't spend money on alcohol," she said coolly.

"Then I guess we'll make this one on the house." Still smiling, still amused.

An eyebrow shot up to his hairline. "Oh?"

"Too expensive?" she challenged.

"Then you probably shouldn't have offered a freebie." She was feeling pretty victorious.

"Never figured you for a whiskey girl."

He was goading her. She'd return the favor. "Are you going to follow through? Because if you don't, I completely understand."

"So, you take advantage of the kindness of strangers?" His words suddenly tinged dark. She nearly flinched at the contrast. "Is that the kind of person you are?"

He looked at her evenly, but his eyes were dark beneath the glint of his spectacles. Makoto had the distinct feeling that she had been walking a dangerous road, skirting between boundaries, and he just forced her to pick a side. A civilian shouldn't have that kind of grip, that dark charisma.

She considered her answer. "I try to show people not to make foolish decisions."

He chuckled softly. "They probably call you uptight. Robotic."

Cute Barista pressed the bottle into her arms. "Here's the '92 Yamazaki. Your drinks will be out in a minute."

He bustled from behind the counter. Makoto clutched the bottle to her chest. Her gut churned, like the first and only time she'd failed a test in second grade. (It had been Japanese Calligraphy, and they were supposed to copy a simple kanji from the teacher using traditional brush and ink, only Makoto had found it too simple and attempted the complicated kanji of 'hair,' and it had been perfect, she'd known it had been perfect, but her teacher had only scolded her saying that she'd Missed the Point and Failed the Assignment, and from that day forward, Makoto realized that teachers didn't really want to teach, they just wanted to be followed. Not that she was bitter about it. At all.)

The question was: what did she feel like she failed?

She quietly watched Cute Barista work his magic. His movements were crisp, efficient. Either he'd been a barista his whole life, or his dexterity had been honed by other means.

Her sleep-deprived brain fed her all kinds of terrible ideas, ranging from Give him your number to Kidnap him and throw him in the back of your car.

For one, Ryuuji was also in her car.

She really needed some sleep.

Cute Barista turned and slid two cups across the pickup counter. He was smiling, but it was small across his face. It looked polite and contrived, no longer amused.

Makoto felt the distinct urge to apologize, but she didn't even know for what.

She grabbed the drinks and surged to the door. Something was itching under her skin and she wanted to get out of there as fast as possible.

She paused at the door, an unspoken question on the tip of her tongue.

"I figured I should tell you," answered Kurusu Akira, "because I have the feeling that you'll be coming back."

She left without a word.

| POLL: "Are the Phantom Thieves just?"

"like legit look at what they do, they get the bad guys"

"They saved my mother. That's all I will say."

"what their doing is WRONG. dont u guys SEE? they do WHATEVER they WANT. they dont ask PERMISSION. they have a GOD COMPLEX."

"How would you guys feel if someone forced you to have a change of heart?"