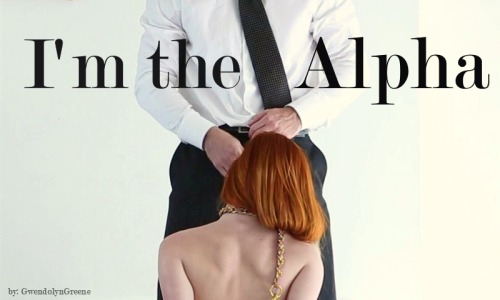 Claire wants to know just what it means for Owen to be the Alpha, and he knows there's only one proper way to show her. Luckily, she seems eager to learn.
--
Dom Owen! Sub Claire! Lots of sex!

Chapter 1: Lesson One: It's Not About Control...

“See, being the Alpha isn’t about control…” Owen said, tracing his eyes over the curve of Claire’s red hair hanging beneath her chin. It danced back and forth with every movement of her head. He brushed his hand through the ends, watching them flutter. His fingers threaded through the hair on the back of her head to grip the base of her neck gently. “I’m not controlling you. You’re sucking my dick because you want to, isn’t that right?”

Claire moaned, her lips stretched around his cock, the sound sending vibrations through his every nerve fiber. His hand twitched in response as she bobbed forward again to take him back into her mouth. She was already almost kissing her hand, which was wrapped around the base of his cock, rubbing short strokes with her soft fingers.

“That’s it, pretty girl.” He said, admiring the view. “Nice and slow.” He flexed his fingers lightly, keeping himself from putting pressure on her head. She’d been eager at first; too frantic, too fast. He’d stopped her, making sure she was listening. Showed her the nice, easy rhythm she was using now. She was, after all, the one who wanted to learn about Owen’s “pack order” and just what it meant to have an Alpha. But that meant so much more than simply following his orders. There was so much more that Owen could teach her, as long as she was willing to put in the work.

The fact was, it hadn’t taken much persuasion at all for Claire to get on her knees before him, eager to get started. Whether or not she was actually going to submit to him, allow him to be the Alpha, was another question. But the progress so far was encouraging. The first thing Claire needed to learn was that he wasn’t making her do anything. If Claire wanted to please him, she’d have to put in the work to earn it.

She pulled back again, suckling at the tip. Her hand ran long, smooth strokes down the rest of his cock. She flicked her tongue over him, lapping up the beads of precum leaking from him. Then before he could instruct her, she bobbed back down and nearly took all of him in at once.

Owen let his head fall back, leaning his weight against the countertop. His mouth fell open and he let out a low sigh. Claire was good at this. He couldn’t help but wonder how many men she’d had to practice on to be this good at sucking cock. While his eyes were diverted, Claire’s hand snuck over to his balls, startling him with the sudden pressure as she gave them a gentle squeeze. His head flew back up. He locked eyes with her, gazing up at him to probe his reaction.

“Such a pretty girl…” He breathed, giving her permission to continue. His spare hand clenched around the edge of the counter, knuckles surely turning white. “Just like that.”

She gagged as she swallowed him down again. The short curls of his pubic hair were just beginning to touch the end of her nose, and he wasn’t sure how much more she could take before they simply ran out of room. Already he was feeling the back of her throat push against his dick. She was being such a good girl, remembering the slow rythym he’d shown her. But now he was tiring of this pace.

His hips twitched forward, just as Claire was sucking down his entire cock, and she sputtered. She pulled back for air, gasping in a few lungfuls before running her lips down the side of his cock to keep him stimulated.

“You want to fuck my face?” Claire said, plainly.

Owen shook his head. “That’s not what this is about. I’m not makin’ you do anything. If you want it, you gotta ask for it.”

This was it. This would show whether Claire really wanted to learn or not. She was silent for a moment, her eyebrows knitting back together in that serious business-like manner she normally donned, and Owen expected her to turn around and stop this whole thing in its tracks.
Then Claire leaned back, stroking him in long, languid strides. That familiar dark lust returned to overtake her features. “I want you to fuck my face.”

Owen’s heart raced at her response. He let go of the countertop, taking her lower lip in between his fingers. He tipped her chin up and squeezed gently, feeling how thick and swollen her lips were. “So eager, pretty girl. But since you asked so nicely…” Owen said, cocking a grin. He tightened his fist in her hair and released her lip. Poised himself back toward her open mouth. “Go on, give it a kiss.”

Claire lowered her eyelashes, planting a wide, wet kiss to his tip. Then she ran her tongue in circles around him one more time before fitting him inside her mouth. Her cheeks her warm, and wet enough to provide an easy glide. He pulled her head forward a bit to meet his hips as he thrusted gently into her. Then again. And again, until he could feel his dick hitting the wall of her throat.

He started slow, letting Claire adjust. He pulled her head back, letting her catch a breath before diving back in, thrusting faster. His hips were meeting her chin every few seconds. Both her hands were now resting against his thighs, gripping his jeans, for stability. Perhaps they’d rushed into things a bit too fast. Owen’s pants were barely shoved down enough to free his cock, and he’d only hastily ripped open the first few buttons on her blouse to expose the tops of her breasts. Now that his thrusts were getting faster and harder, Claire was fighting to keep her gag reflex down. When he pulled out again to give her air, a few drops of spit fell from her open mouth, landing in the valley of her breasts.

“You wanna keep going, pretty girl?” Owen asked, checking to make sure she didn’t want to bow out now that tears were starting to leak from her eyes. She didn’t say anything but nodded furiously, taking his dripping cock back into her mouth herself. He grunted as he began to thrust again, pace picking up even more when he felt her hand give another squeeze at his balls. She massaged little circles into them with her thumb as he built up towards his climax, and then one little tug was all it took.

Owen grunted. “I’m gonna come!” He warned, letting go of her hair. Her face was red and she must have needed air, but instead of pulling away she swallowed him down again, burying her face in his soft blonde curls as he came, hot and fast, down her throat.

When she’d swallowed every last drop he had to offer and he’d caught his own breath she pulled back, gasping. She wiped away a few of the trails leading from her lips back to his softening dick, ignoring the drops that fell to her chest. He ran a hand down the side of her head, sweeping away her hair. She looked up at him once again. He slowly came down from his high, landing gently back on his feet in front of Claire.

She was amazing. Cheeks red and lips engorged, she remained on her knees, looking up at him as if awaiting instruction. But he had to take a moment just to look at her. The pale skin of her chest, now splattered with the wet mess of what was probably one of the best blow jobs Owen had ever received in his life. They were all streaking down into her cleavage, pooling against the delicate lace of her bra. She looked up at him with hunger in her eyes and he slid into another grin.