Just Your Heart, In Exchange For Mine

Dean owns a bakery and Castiel loves his pie. This could be such a cute little bakery love story – if it weren’t for the fact that one was a retired hunter and the other one a powerful witch. There’s also the matter of the black little cat Dean finds in front of his bakery one cold and rainy night. Not to forget the crazy witch on the loose, ripping out other witches’ hearts.

Hello again :) this has been my very first Reverse Bang and let me tell you: it was a blast :D my artist delicirony and I had so much fun plotting this out and I knew it would be a long fic - but I never thought it would be my longest yet ;)
You’ll find the piece that inspired all this in the prologue.
Just one little thing before we start: This is a canon divergent fic without the angel story line. Also, I set the original Supernatural story line back a few years: you’ll find references through the fic to some hunts that happened in later years, but I let them happen earlier in Dean’s life (just think of it as roughly five years “missing”).
And now, I hope you have fun with the amazing art and the story it inspired.

The bakery looked so warm and inviting. It was empty save for the lonely man cleaning the counters. Soft music could be heard even through the thick window, a classic rock song, accompanied by the rumbling voice of the man. The light illuminated the last display cases of delicious muffins and pies in the window, not yet cleaned out for the night.

The warmth and light was such a contrast to the outside world. Night had already fallen over the city, the darkness hardly a difference to the day. Storm clouds had brought heavy rain around midday, stealing all of the sunlight hours before dusk. With the actual night, the cold came. It was bordering on dropping below freezing, the rain the only sign that this line hadn’t been crossed yet. But even the rain felt colder, each drop stabbing into skin like pins and needles. No sane soul was outside in weather like this. None. Except for one.

Cas’ blue eyes reflected the light coming from inside this warm haven. Had anyone seen him in this moment, they would’ve seen all the sorrow, the despair in those eyes. How much he longed to be able to just go to the door and step inside. He was so desperate for it, for so many reasons. It was not just the warmth that would shelter him from the cold creeping inside him with every further drop. It wasn’t just the delicious treats, teasing him, reminding him that it had been days since last he had tasted them. No, it was mostly the man inside the bakery. But if Dean had seemed out of his reach before, now he most definitely was. And yet.

One of Cas’ paws landed on the glass of the window, as he was longing for what lay behind. While he watched Dean sway softly to the music, the rain still pouring on his black fur, he let his mind wander back to the day that had started it all … 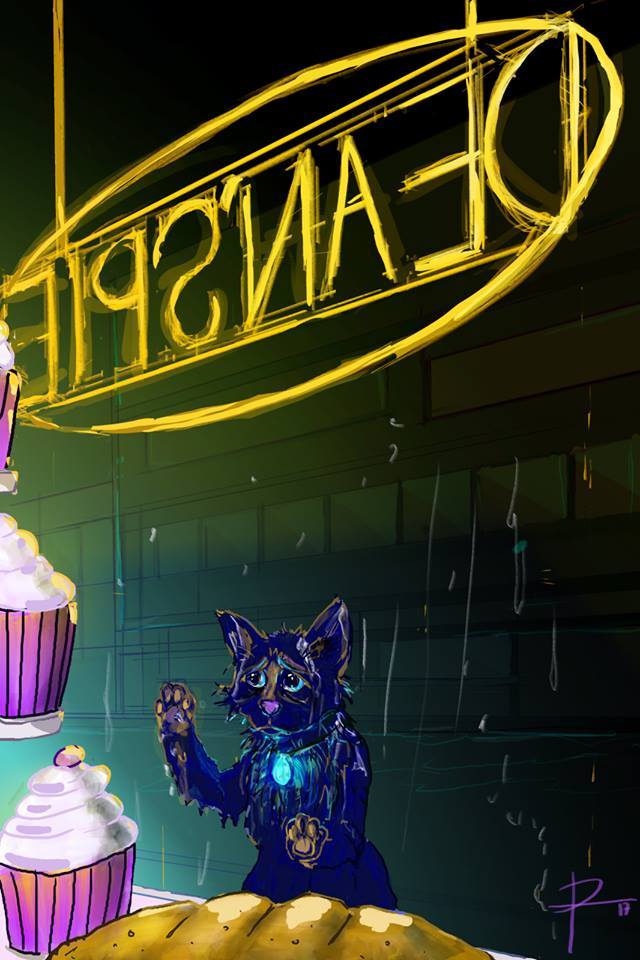