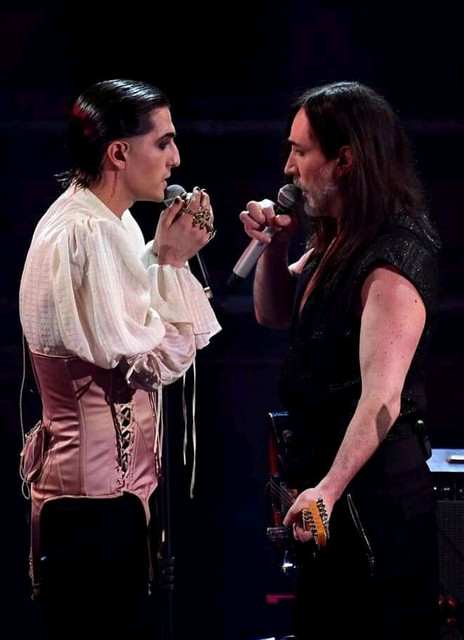 Welcome to my Damagnelliverse, where the "what if" rule is followed..that means: "what if Damiano from Måneskin and Manuel Agnelli were in a relationship in real life?"
If you are here you already know enough about Damiano and Måneskin (I know you all got obsessed with them, don't lie), but I can hear you asking "Who the hell is this Manuel Agnelli italian writers seem to be so obsessed with?"
He's the singer/musician of the italian rock band Afterhours and in the last 30 years he did A LOT for the italian music scene; he has also been (and still is) one of X Factor judges, and there he became Måneskin's coach (and he's the one who came out with the idea of making Damiano pole dancing, so, bless him).
He always deeply believed in and supported them, and this could have already been enough, but Italians started shipping them really hard only after they sang together in Sanremo Festival on the song "Amandoti" (trad: "Loving you") from CCCP. You can enjoy their performance HERE
Probably now you get why we ship them.
This said, NOTHING of what concerns their relationship in my fanfictions is real, but I like making references to events/stuff that instead are real, just because I like to try making the stories as realistic as possible.
This implies also references to Manuel's partner and daughter and to Damiano's girlfriend, but the way I represent their relationships is ABSOLUTELY NOT REAL.
The realism is a simple stilistic choice, there's absolutely no intention to offend anyone.
The series will be translated (just give me time).

NOTES:
This series is a work of fantasy.

There are explicit descriptions of sex scenes, read the tags. If you don't like something or something disturbes you, don't read it.