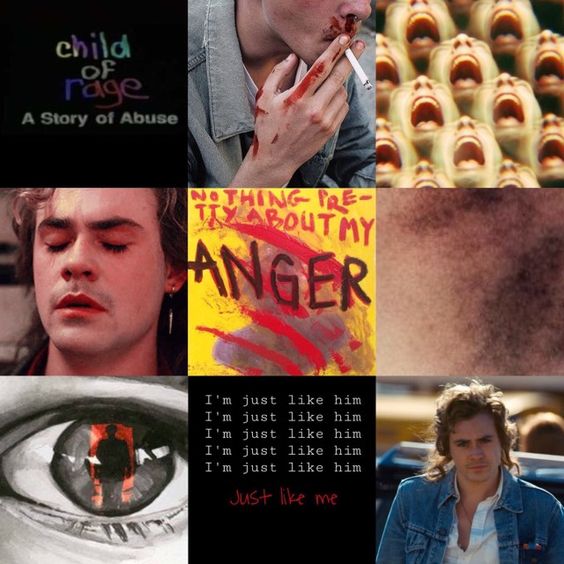 He held onto her hips as she moved up and down on him, her lips pink and puffy from kissing. His tongue trailed from her chest up to her neck where his lips and teeth bruised her pale skin; her breath was hot and heavy against his hair, her fingers tangled in his golden brown curls. She repeated his name over and over again and then he felt her tighten around him; her thighs twitched as she came closer to losing her mind, lost to the sensation of him throbbing inside her, just waiting to explode but holding on to make it last as long as possible.

He gripped her ass cheeks, digging his fingertips into the soft flesh. Her moans of pleasure-filled whimpers made him switch her spots, pulling out a bit just to make her beg to be back inside her. With a smile forming on his lips, he gladly gave what she begged. He kissed her lips roughly as his hips moved faster and deeper; his teeth tugged her lower lip and gripped her colourful locks, tugging enough to pull on her lip and draw a bit of blood. He licked the red off her skin as she twitched under him, losing the battle both of them had been fighting.

He sat up hearing his morning alarm go off. Sitting up in his bed, he cursed seeing the dent in his blankets and the wet spot on his boxers. He ran his fingers through his hair, growing hard with the lingering thoughts of Quinn whimpering beneath him. He quickly grabbed his clothes from the floor and headed to the bathroom, pushing his sister Max out of the way before she could even get inside. He ignored her remarks of being him an asshole as he turned the hot water on and stepped into the shower.

Quinn wasn’t someone that he would normally bring to a hotel; it was usually just one of the popular girls that wanted to spend a night with Billy Hargrove. After all, he was the new kid, the bad boy, the guy who makes girls’ heads turn as much as Steve Harrington and his famous hair.

His mind wandered to the thought of Quinn’s breasts with perky pink nipples, to the tattoos hidden under her shirt and the long scar on her side that ended on her hip. He quickly cleaned himself up and got dressed, fixing his hair before stepping out of the bathroom, steam following him.

“Did you use all the hot water?” Max glared before she let out a frustrated sigh and pushed past him, slamming the door and locking it behind her.

He ignored her, not giving two fucks to whether he used the hot water or not. Walking into the kitchen he sees Susan running around cooking breakfast and making coffee. Neil is sitting at the table with his coffee cup and newspaper, a cigarette hanging from his mouth. The eyes that Billy hated glanced up at him, which he ignored and instead grabbed his car keys. He paused, hearing Neil fold his paper and place it next to his half eaten eggs, bacon, and toast.

“Are you heading out already?” Neil asked in a tone that made Billy instantly feel like a child caught with his hand in the cookie jar.

“I got somewhere I gotta be. Max can skate to school,” he said, turning around as Susan placed a large plate of pancakes in the middle of the kitchen table.

“Other than school you got somewhere else to be? Susan made breakfast, you should sit down and eat. She made it just for all of us to have some family time.”

Billy tried to avoid all attempts at “family time” because at this point and for years since, there was no such thing as family time between them, at least not since his mother left. After the first few weeks of his mom leaving he thought she would come back and take him with her, far away from the angry shouting and punches his father would throw at him. But when he realised his mother made only false hopes and promises, he knew she would never come and save him.

Billy had once been a good kid. This was barely a memory now, since the day she left he took his rage out on everyone or anyone who dared try to make him feel small. The dreams of running away from his dad seemed to fade as he grew, but as he got older and closer to being an adult, he realised that dream could become a reality.

Then Neil met Susan. Susan was a pretty redhead, a kind sweet woman, who also had a daughter - a punk skater kid called Maxine. Susan was too soft, too kind, too blind to see what kind of man his dad truly was behind the cologne and blue eyes.

Billy glanced at Susan with an obvious expression of disinterest in staying for family time when he could head to school early and catch Quinn before first period. He felt bad for Susan being stuck in a marriage with Neil and having a step-son who sparks as much fear as his father does. She had been there and seen what Neil could do to Billy; she saw the busted lips and noses but was too scared to do anything about the abuse. She always tried to bring everyone close to the idea of having a family but Billy wanted nothing to do with her or Max. But for now he was stuck with them.

“It’s okay Neil, I’m sure he has somewhere to be-“

“No, he the only place he needs to be is in the damn chair,” Neil pointed to the empty one, “Sit down and eat. Don’t make me drag you by that faggot earring.”

Billy’s nostrils flared at the remark. He reluctantly sat down as Susan placed a plate of eggs, bacon, and toast down in front of him. Max came out from the bathroom and joined the table, ignoring Billy as she got her food and quickly began eating. She had made friends already in this cow-shit town with a group of boys and a girl. They were a pack of dorks, far different from her skater friends back in California. These kids in Hawkins practically lived at the arcade playing video games and talking about science-fiction, all of which Billy had to sit and listen to during the brief moments his car radio wasn’t on when he picked her up.

Billy sat and ate until he got sick of his dad staring him down and grabbed his keys, heading out the door and into the safety of his car.

Thank you to my friend Katie for editing this for me, moodboard made by me !!! I'm gonna try to make some for each chapter. Thanks to Tia for the comment and thanks to everyone leaving kudos!!!! I finished typing chapter four the other day and I'll be working on Chapter Five and Six tonight/tomorrow work is usually busy on the weekends so I'll use it as a break. Also I have a pinterest for this story and a playlist! Pin: https://pin.it/4xvmzpf44kviug AND IF YOU WANNA LISTEN TO THE SONGS HERES THE PLAYLIST!!!! Spotify: https://open.spotify.com/playlist/73cUjxR742UZeYVSvbuGrN?si=MPZVVOD9QW2xcTiejT0ywA