The Life Prison series is inspired by conditions in prisons between 1880 and 1920 in North America and Britain. A bibliography for the prison portion of the series is available here:

This series is part of Turn-of-the-Century Toughs, a cycle of historical speculative novels which are inspired by turn-of-the-century life in the Mid-Atlantic region of the United States of America. The Magisterial Republic of Mip, where Mercy Life Prison is located, is an imaginary nation based upon the geography and history of the central and western counties of the State of Maryland (from Carroll and Howard Counties to Garrett County). Mip City – the republic's capital, where Mercy Prison is located – is based on a somewhat more urbanized version of Frederick, Maryland, a lovely eighteenth-century city whose main claim to fame is that it was the location of various activities during the American Civil War. Mercy Prison itself I've placed in the section of Frederick which, in our own world, is occupied by the Maryland School for the Deaf. During the French and Indian War of the mid-eighteenth century, military barracks (which still exist) were built on that land. The barracks were later used as a prison.

The actual shape of Mercy Prison is my own invention. A circular prison layout similar to Mercy's – a "Panopticon" – was proposed by social reformer Jeremy Bentham in 1785. As a result of the influence of the reformist Eastern State Penitentiary (1829) in Pennsylvania, a wagon-wheel layout became popular for American prisons. I've retained the simple circular design because it fits best with the belief by some Mippites in the cycle of rebirth – and also, not incidentally, because it allows for better drama. Other alterations I've made to nineteenth-century prison life– such as banning firearms – were also for the sake of heightening drama.

However, some of the nastiest bits in this volume – such as the cold-water treatment, routine flogging, stark punishment cells, regulations requiring prisoners to remain silent, and high rates of insanity and mortality – are, unfortunately, historically accurate. Nineteenth-century prison-workers experimented with various methods of keeping prisoners quiet and obedient; many of these methods were originally aimed at promoting repentance in the prisoners. It is heartbreaking to read how the idealistic practices of early reformers came to be regarded as abusive practices that had to be overturned by a new generation of guards and prison-keepers. By the time that Mercy's Prisoner is set, in the last two decades of the nineteenth century, this second wave of reform had begun.

It is exceedingly difficult to locate information on the sexual practices of prisoners and guards during this period, because censorship reigned in prison literature. As far as I can tell from the scant sources, although nonsexual abuse by guards occurred often, there does not appear to have been much sexual abuse by guards; in that regards, I have parted strongly from the historical record. Homosexuality between prisoners certainly occurred. It is difficult to tell how much of it was willing, because it was treated as a vice by nineteenth-century writers of books on prison life. By the 1910s, homosexuality among prisoners was so common in American prisons that a prison warden, Thomas Mott Osborne, was forced to clarify a remark he made to the public that homosexuality would "always" happen in prisons.

In the Life Prison series, homosexuality plays a somewhat different role than in our world, since bisexuality is mainstream and legal in Mip. What remains true in Mercy Life Prison is the statement made by John N. Reynolds, a former prisoner in the United States: "In the darkness and silence . . . hardened [men] debase and mistreat themselves and sometimes [others]."

Reynolds, whose memoir The Twin Hells: A Thrilling Narrative of Life in the Kansas and Missouri Penitentiaries was published in 1890, goes on to say: "It is believed by the writer that if the people of [this state] knew under what circumstances men in the prison were compelled to work, there would be a general indignation, which would soon be expressed through the proper channels, and which might lead to a proper solution of the difficulty." The rest of the Life Prison series will explore whether that statement is true in Mip.

All of the locations mentioned in this story are inspired by real locations in Washington County in the western part of the State of Maryland (although Indian Springs has undergone a metamorphosis into Ammippian Springs, and Fort Frederick has a new function as Compassion Life Prison). I've done my best to recreate what life was like in Washington County in 1892, with occasional small liberties. My bibliography and links at my blog to photos of the locations can be found in the "Maps and series resources" section at:

The National Turnpike, also called the National Road, was the first federally-funded road, extending from Maryland to Illinois. The portion of the road that runs past Indian Springs was built through private funds. As the story indicates, the road declined in the late nineteenth century, due to competition from the railroad, but it revived in the twentieth century when automobile trips became the great American pastime. Indian Springs remains a quiet little cluster of houses, with a general store.

The railroad in this story is based on the Western Maryland Railway, originally called the Western Maryland Railroad (WM). More precisely, it is based on the Potomac Valley Railroad, which was owned by the WM in the 1890s. That railroad, which ran from Williamsport, Maryland, to Cherry Run, West Virginia, opened in August 1892, with passenger trains running a month later than the opening. It followed the route described in this story, connecting with the Baltimore and Ohio Railroad (B&O) in Cherry Run. The track from Williamsport Junction to Cherry Run is still used by freight trains, though the track through the town of Williamsport itself lies abandoned. The train trestle mentioned in the story is near McCoys Ferry; it remains in use. Big Pool now marks the beginning of the Western Maryland Rail Trail; hikers can follow the trail west to Hancock. Further west, in Cumberland, visitors can take a ride on a steam train of the Western Maryland Scenic Railroad.

The canal in this story is inspired by the Chesapeake and Ohio Canal (C&O). A flood in 1889 – from the same storm that destroyed Johnstown, Pennsylvania – temporarily closed the C&O Canal. The canal was bought by its rival, the B&O Railroad, but contrary to what cynics might have predicted, the B&O proved to be a kind master. The canal reopened eighteen months after the flood and remained in business until further flooding in 1924 shut it down permanently. The canal is now a National Historical Park. Visitors can travel the towpath from Williamsport (whose aqueduct, warehouse, and turning basin remain, just yards from the abandoned railroad tracks) to Big Pool, encountering along the way the path to Fort Frederick.

My information on freight-hopping and tramps (or hoboes; no strong distinction existed between those two categories of wanderers in 1892) is taken primarily from the writings of tramps from the 1890s: William Aspinwall, Josiah Flynt, Walter Augustus Wyckoff, William Henry Davies, and Jack London. In addition, I gathered facts from modern freight-hoppers who have posted online videos of their experiences, and from modern scholars and fans of hoboes and trains. In particular, I would like to express my debt to Jeremy Cooper, whose website, Western Maryland Railway West Sub (wmwestsub.com) provides a detailed account of the stations along my characters' journey, complete with historical and modern photos. With the help of his site, I was able to plan ahead of time which parts of Western Maryland to visit while researching this story.

The dangers faced by tramps were well attested to in turn-of-the-century literature written by the tramps themselves. Jack London, who "beat" his way east as a teenage tramp, later wrote an essay entitled "Rods and Gunnels" in which he offered a detailed description of one manner in which he journeyed:

I sit down on the cross-rod, back resting against the side of the truck, one shoulder against the cross-partition, the other shoulder within a couple of inches of the whirling wheel. My legs are disposed along the rod to where my feet rest on it at the opposite end within an inch or so of the other wheel. More than once I have had a wheel rasp against my shoe or whizz greasily on my shoulder. Six or eight inches beneath me are the ties, bounding along at thirty, forty, or fifty miles an hour, and all in the world between is a slender swaying rod as thick as a man's first finger. Dirt and gravel are flying, the car is bounding overhead, the earth flashing away beneath, there is clank and clash, and rumble and roar, and . . . this is "riding the rods."

A more matter-of-fact account of tramp travel appears in his diary entry for April 9, 1894, when he rode a "special" train, probably on the roof of one of its cars: "A spark caught fire in my overcoat & smoldering away suddenly burst into flames. The train was going 40 miles an hour and it was quite a job to put it out. My overcoat & coat were ruined. I rode the bumpers [i.e. the coupling gear between two cars] the rest of the way."

The physical dangers of freight-hopping were shared by all tramps. But young tramps like London faced special problems. In an undated letter that was probably written in the 1890s, William Aspinwall told Professor John J. McCook: "They [a gang of tramps] do not hesitate as I am told by Hobos to commit any kind of crime. . . . I was told a young boy probably 16 or 18 y old from Kalamazoo, Mich hapened to jump into a box car to beat his way and there was a number of the above Gang in the Car. They striped the young fellow of everything but his Pants & Shirt, Committed sodomy on his person and then threw the fellow out while the train was running at full speed." However, as Harry McClintock indicated, teenage tramps also received more friendly help from some of the older tramps they met.

Not surprisingly, turn-of-the-century tramp literature had a great deal to say about policemen, jailers, and prisons. Indeed, much of the later version of Big Rock Candy Mountain contains references to these topics of perennial interest to tramps and hoboes: the song speaks of bulls (railroad policemen), brakemen (whose duties included expelling free riders), and jails. The writings at the turn of the century reveal that tramps had a love-hate relationship with railroad workers: some railroad workers would provide help to the tramp, while others would blackmail or even murder tramps.

Prison literature from that time shows the same ambiguity in prisoners' relations with guards. Guards could be the prisoners' salvations or their source of unending torment. The choice was made by the guards themselves. 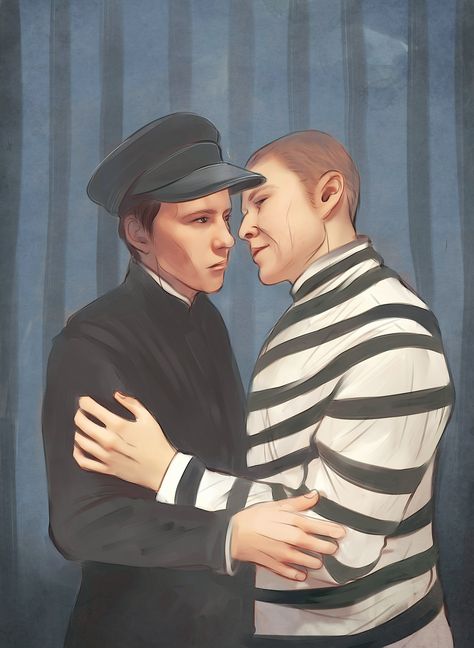 This story was originally published at duskpeterson.com. The story is a work of fiction. Names, characters, places, and incidents either are the product of the author's imagination or are used fictitiously. Copyright © 2002, 2006, 2008, 2012, 2013, 2014, 2017 Dusk Peterson. Some rights reserved. The story is licensed under a Creative Commons Attribution License (creativecommons.org/licenses/by/4.0). You may freely share this story, provided that you include this copyright notice. If you transform or otherwise adapt this story, please give credit to Dusk Peterson for the original story and make clear that you made changes to the original story. Sample credit for a transformative work: "This fanfic is inspired by [Story Name] by Dusk Peterson (duskpeterson.com)." Please also read Dusk Peterson's Shared Universe Disclaimer (http://duskpeterson.com/copyright.htm#disclaimer).