In May of last year, we posted a look at the Archive’s traffic numbers, which had increased rather dramatically early in the year (most likely for pandemic-related reasons). We now have the numbers for the whole year and can confirm that yes, people sure did consume a lot of fanworks in 2020! We can also provide a brief update on traffic numbers for the first quarter of 2021. 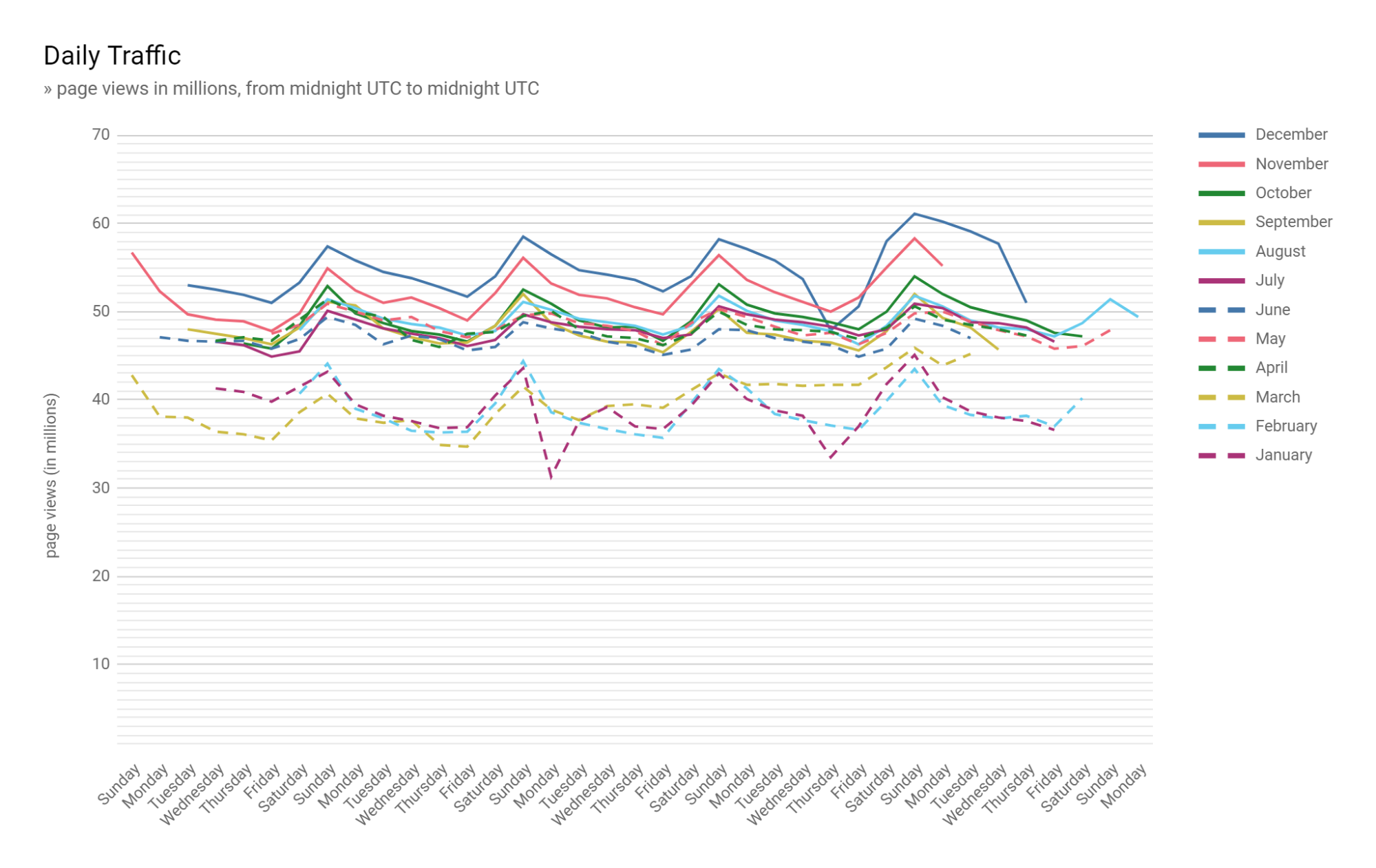 Image: A chart of AO3 traffic in millions of page views per day, for each month of 2020. Traffic consistently peaks on Sundays, creating monthly lines with hills and valleys. For January through March, the lines cluster around 35 to 40 million page views; the other months are clustered noticeably above that, between 45 and 55 million, with December’s Sunday peaks reaching closer to 60 million.

Traffic in March, represented by the dashed green line in the chart above, began rising sharply mid-month. The six months after that were characterized by higher traffic overall, and less of a pronounced contrast between the work week and the weekend.

The lowest number on record was 31.3 million page views on Monday, January 13, with a typical Sunday at that time racking up around 43 million. From April to September, the numbers meandered between roughly 45 million and 51 million page views.

Only in late October, traffic started increasing above the new normal, with a series of record highs in November, shown in orange. December, has always been the busiest month for the Archive, and 2020 was no exception. Most notable are two drastic traffic slumps on December 24 and December 31, with a veritable mountain of page views between those holidays. Barely fitting on the graph, the record for 2020 was reached on Sunday, December 27, with 61.1 million page views.

📈 Raw data can be found in this spreadsheet: Daily AO3 Traffic in 2020 (Google Sheets) 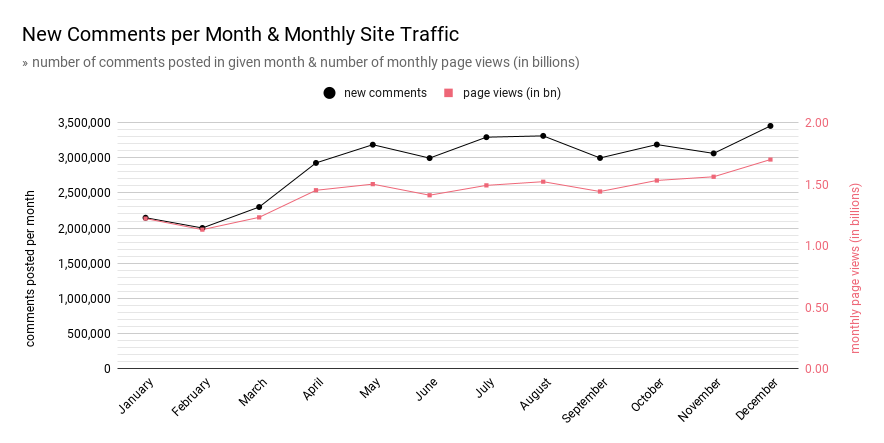 Image: A line chart depicting how many comments were left and how many page views were recorded for each month of 2020. Comments in black, starting at roughly 2.15 million in January and ending at roughly 3.5 million in December. Traffic in red starting at 1.2 billion page views and ending at 1.7 billion. Both trend upwards, with a common pattern of slight dips in June and September, rising sharply again in December.

As site traffic started increasing in March last year, so did user activity as measured in new works, chapters, bookmarks, comments and kudos created every month. Users posted roughly 2.3 million comments in the month of March, about 150,000 more than in January. In April, that number jumped to 2.9 million.

(Following a similar trend, users hit the kudos button about 17.3 million times in March, compared to 16.9 million in January. In April: 20.4 million.)

📈 Raw data can be found in this spreadsheet: Monthly AO3 Activity in 2020 (Google Sheets)

Traffic over the years 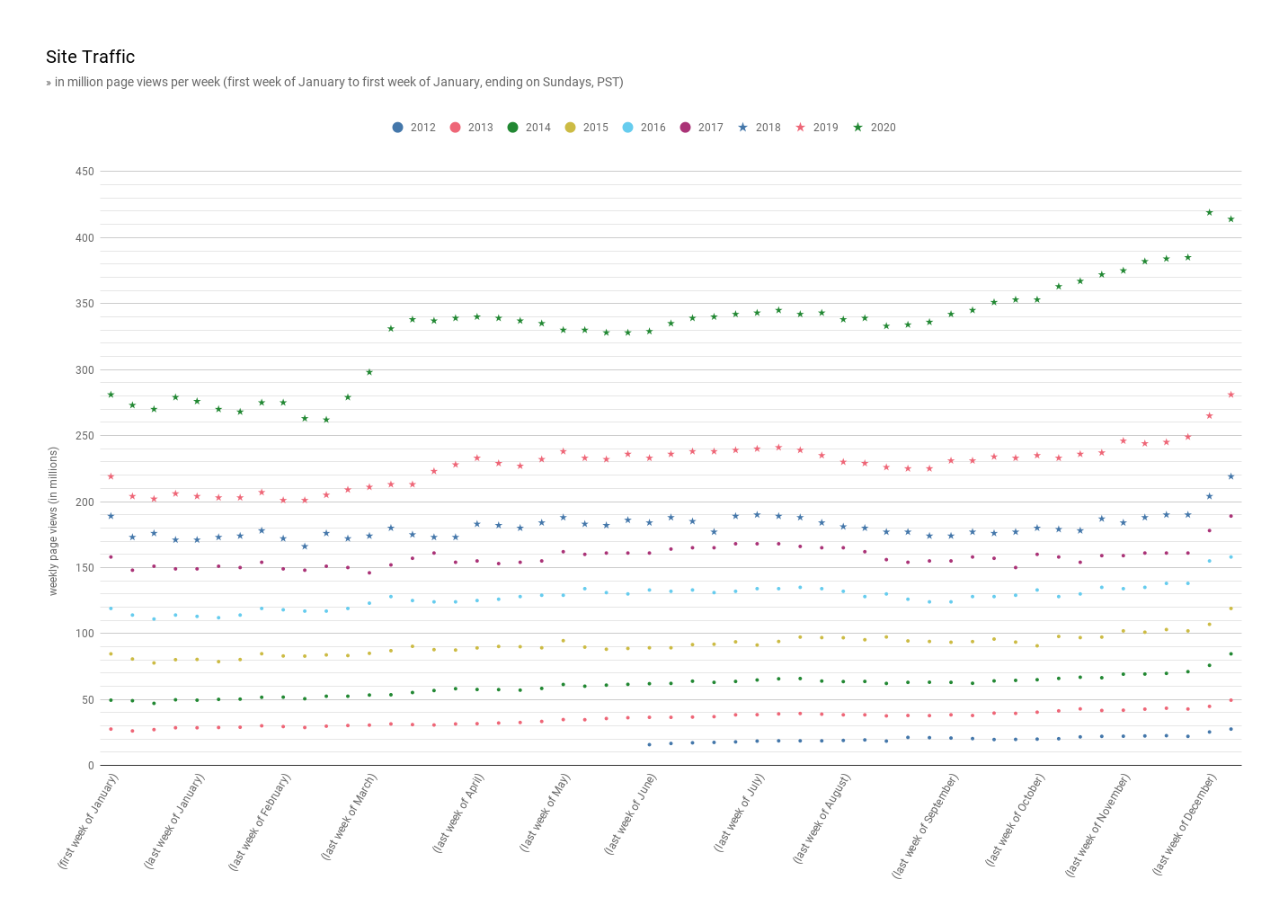 Image: A chart showing AO3 traffic growth from mid-2012 to the end of 2020, measured in weekly page views. Each week is a dot, each year a meandering line of dots. Traffic trends upwards every year, with recurring patterns. For example, September tends to be a slow month, with noticeable dips. Most of the lines are relatively close together, representing a steady growth in traffic over the years, with a much wider gap between 2019 and most of 2020. Lowest point: 15.8 million in the last week of June, 2012. Highest point: 419 million in the last week of December, 2020.

Traffic did level out below the 350 million mark until late October, in a pattern more consistent with previous years, and then started increasing again towards the end of the year. The very first week of January, often including the tail end of December, is usually when new record highs are reached.

For comparison, here are the page views (in millions) for the week ending on:

📈 Raw data can be found in this spreadsheet: Weekly AO3 Traffic in 2020 (Google Sheets) 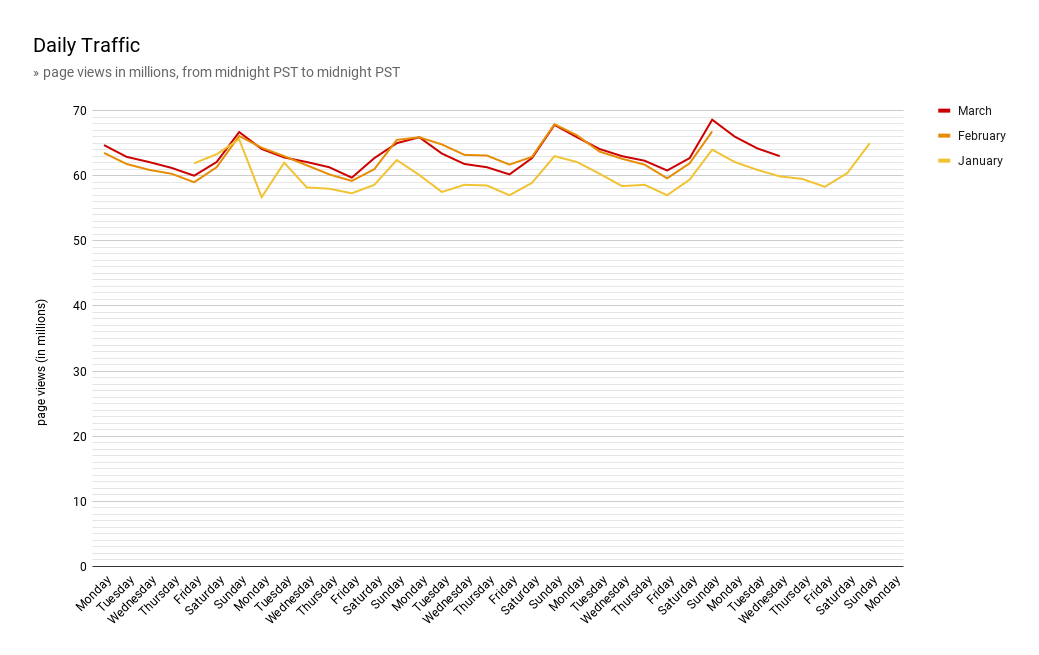 Image: A chart of AO3 traffic in millions of page views per day, for January, February and March of 2021. Traffic consistently peaks on Sundays, creating monthly lines with hills and valleys. In January, daily page views ranged between roughly 58 million and 64 million. Traffic in February and March was higher (between 60 and 66 million), and both months followed the same pattern of decreasing traffic from Monday to Friday and a sharp rise on weekends, with almost identical numbers. A new record was reached on Sunday, March 28, with 68.6 million page views.

Site usage remains high in 2021, but has currently stabilized at just under 70 million page views on peak days. While traffic is no longer growing by leaps and bounds, 2021 is still shaping up to be another record-breaking year!

We're grateful to everyone who uses the Archive to share and enjoy fanworks, the donors whose contributions pay for the powerful servers that handle this traffic so smoothly, and all the volunteers who keep the site running. We look forward to what the rest of the year brings!

📈 Raw data can be found in this spreadsheet: Daily AO3 Traffic in Q1 2021 (Google Sheets)