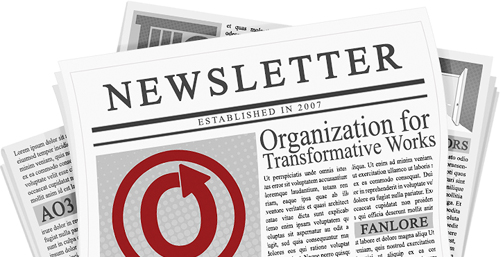 The OTW Board of Directors has been hard at work listening to and addressing the wide array of concerns about the OTW's internal and external approach to racism that came to light in the past month. The result of discussions was announced publicly. This is very much still a work-in-progress, and Board also set up an internal anonymous feedback form for all of our volunteers.

II. AND MORE FROM OUR PROJECTS

Fanlore ran a very successful Bingo Challenge with a record number of participants. Thank you to everyone who helped with the running of the event and to everyone who took part! The committee also announced a new logo for the site, its first since the project was launched in 2008. Follow their Twitter account to stay up to date on Fanlore news.

Legal had a big month. They submitted comments to the U.S. Senate Judiciary Committee. Our comments, which were part of the Senate’s ongoing assessment of section 512 of the Digital Millennium Copyright Act, covered a number of topics: they responded to a report by the U.S. Copyright Office; urged the Senate to consider the needs of Internet users, independent creators, and small service providers; and presented new empirical data drawn from OTW Legal's 2017 OTW user survey regarding section 512’s effectiveness for transformative creators. Thanks again to the many fans that completed that survey—your answers are still helping us make a difference to support fanworks and fan creators!

Members of the legal team also met with the U.S. Copyright Office, continued work on future legal advocacy testimony and submissions, and responded to a number of user queries.

Communications has been reviewing its publication and events process and will have some changes in the works starting in August. They also want to remind readers that suggestions are always welcome for interviewees for our monthly OTW Guest Post series, which includes features on fanwork creators. Meanwhile our Webs Committee restored access to the OTW's website which went offline for over a day in June.

Accessibility, Design & Technology: AD&T released the big rewrite of the wrangling and filtering code that hopefully means fewer issues with large tags and fiddly tag relationships going forward. Thank you to Tag Wrangling for providing input and helping out with all the testing! All the latest improvements and fixes are detailed in the release notes. Together with Systems, AD&T kept users up to date about issues with email delivery due to a change in IP address and some overworked mailer workers.

They have also been wrapping up the first round of design discussions (together with the Policy and Abuse and Support chairs) on one of the next big projects, namely blocking and muting functionality. There's a lot of tiny interrelated details to consider and we want to make sure we get the launch as close to right as possible, so these features are still quite a ways off.

Support tickets are ongoing, and our new volunteers are an absolute gift! 500 tickets in just three days in June drove the ticket count over 1700. Meanwhile, Policy and Abuse received over 1000 tickets. Their new recruits are halfway through training so current staff are excited to have them start helping with a backlog of 3000 open, unassigned tickets.

Systems welcomed a new technical writer to their team and have been busy with email-related work -- moving the IP we send mail from, fixing the mail system that lost its NVME drive, liaising with other mail providers, and setting up a new mail submission system.

Elections have been very busy this month and announced 6 declared candidates running in the 2020 OTW Board election. Translation worked on their Bios & Platforms and the Development and Membership committee organized a mini-drive for anyone wanting to become a member by June 30th, the deadline for voter eligibility. Elections also collected questions for the Candidate Q&A posts and began preparing the posting schedule for Q&As and Candidate Chat times.

V. IT’S ALL ABOUT THE PEEPS

From 23 May to 24 June, Volunteers & Recruiting received 123 new requests, and completed 138, leaving them with 19 open requests. As of 24 June the OTW has 882 volunteers. \o/ Recent personnel movements are listed below.