As pandemic-related social distancing measures and lockdown orders have increased, we've received a lot of questions about whether use of the Archive has been affected. Has traffic gone up as people turn to fanworks for comfort? Are creators posting more works? Are people leaving more comments as they search for a sense of community? From a glance, it looks like the answer to these questions is yes!

We've been keeping track of daily page views since the beginning of the year, and have also pulled some numbers from our database about works, chapters, comments, and kudos added every day for the past year. As always, we're watching our weekly traffic numbers and how they compare to the years before.

You can find all available data in this spreadsheet:

(This file reflects site usage up to April of 2020, and won't be updated going forward. Any interesting new numbers might be shared in future posts.)

Since Google's chart options are limited, feel free to use this data to make your own cool visualizations and share them in the comments! 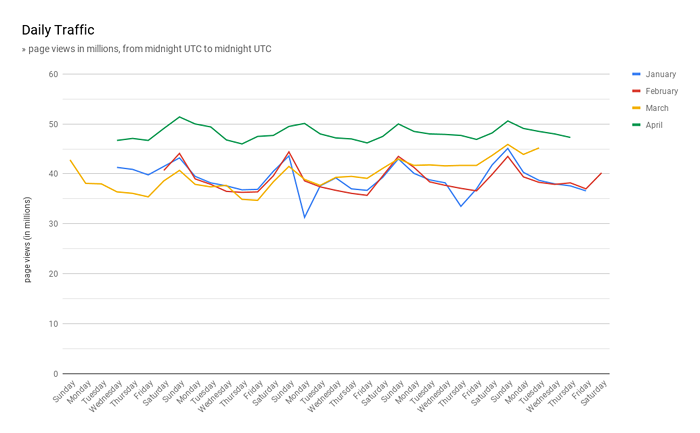 Chart: Daily page views for each month, with days of the week lined up to show the consistent traffic pattern. Hills represent the weekends, with a clear Sunday spike, valleys correspond to the middle of the week.

For the most part, our usual traffic pattern of busy Sunday spikes and slower days in the middle of the week has been holding. However, the hills and valleys have smoothed out into gentler waves, since the concept of weekends has become a bit blurry for some of us. There's also a lot more traffic overall.

Unfortunately, we lost a considerable chunk of our user base when the Archive became inaccessible in China around February 29. In the chart, this is reflected by the yellow line running well below the January and February spikes for about two weeks. Traffic increased again in mid-March, when many places in the U.S and elsewhere in the world began implementing social distancing policies (e.g. closing schools and restaurants and cancelling events) and issuing stay-at-home orders. 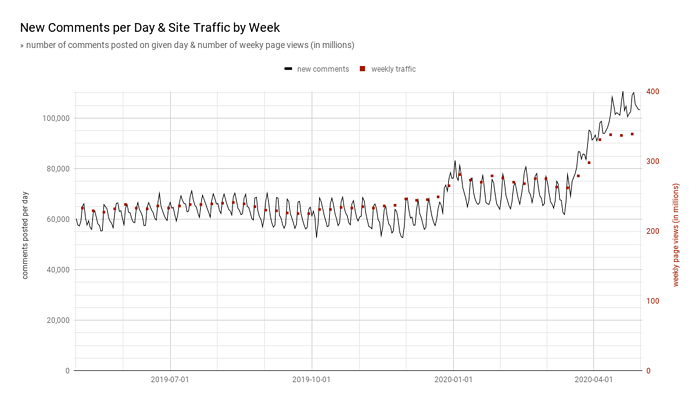 Chart: Daily number of comments as well as weekly traffic from May 1, 2019, to May 1, 2020. The comments create a zig-zag line (more comments on the weekends!) which rises sharply in mid-March. The weekly page views are a series of dots following roughly the same trend, but reaching not quite as high at the end.

For our traffic stats, we don't differentiate between users accessing a work, search results, or someone's dashboard, so we can't make any claims as to actual fanwork consumption habits. However, it's probably safe to assume that increased traffic means people are reading, watching, and listening to more fanworks (and, going by the numbers, also posting more of their own)!

Commenting behavior is a little easier to track, as we can count the number of new comments added each day. Interestingly, the sharp increase in comments starting mid-March seems to outpace even the increase in site traffic in the same time: while April traffic was up 24% from February, comments were up a staggering 42%!

Kudos haven't experienced quite the same level of growth as comments, although they have kept pace with traffic, going up 23% compared to February. The database now lovingly houses over 685 million kudos, with plenty of room for more thanks to our recent kudos migration. 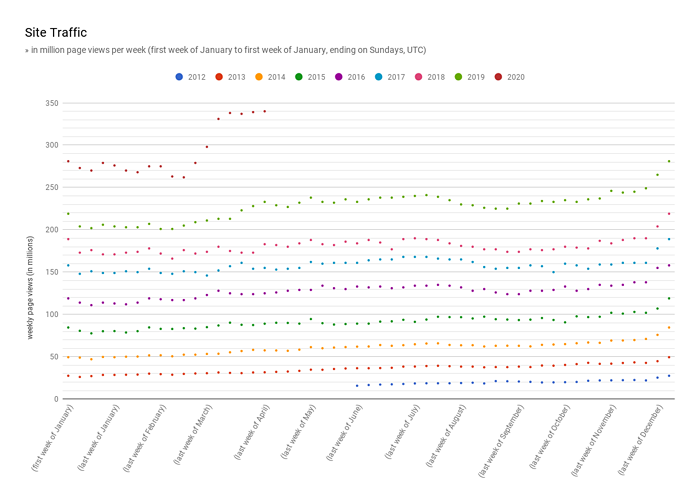 Chart: Archive traffic, as measured in weekly page views, broken down by year starting in 2012. Traffic has consistently increased every year, meaning each new dotted line starts higher than the one from the year before. In 2020, the general pattern of gentle ripples abruptly changes mid-March, as the dots shoot up into the sky.

The Archive has seen consistent growth throughout the years, both in terms of site traffic as well as number of accounts, fandoms, and fanworks. We currently have about 2.5 million registered users and almost 6 million works in over 36,700 fandoms. In the last week of April, we registered 340 million total page views.

Over the years, there have been times when the servers couldn't quite keep up with the increased site usage, and the coders, testers, and sysadmins had to scramble to keep the Archive from falling over. (Sometimes, it fell over for a bit.) While it can still be a challenge to manage a site as big as the Archive on volunteer power alone, knowing that fandom will have our back when it comes to server purchases and contract work makes it a little easier to plan ahead. We've come a long way from the first couple of machines to the 32 servers that currently house all the various parts of the Archive.

Of course, all the hardware wouldn't mean anything without people using the site. It's been heartening to see fandom come together and handle the ongoing worldwide crisis as a virtual community of artists, writers, cheerleaders, readers, listeners, bookmarkers, reccers, and lurkers. We are proud that you have made the Archive your home, and we thank you for all your support over the years. ❤️