Kakarot dragged him to this dusty town, and now Raditz has to deal with the consequences. 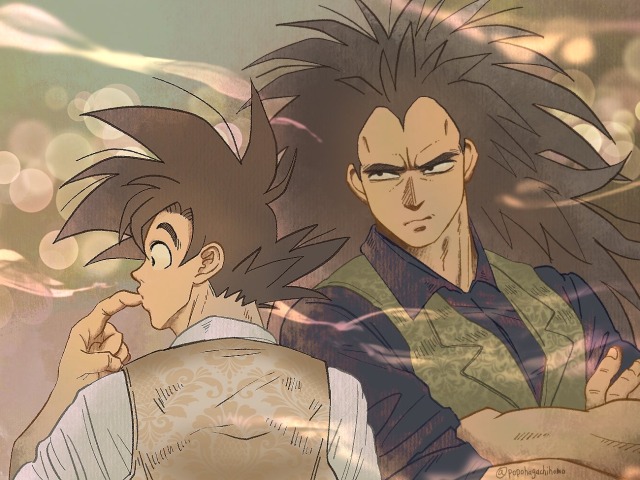 He knew when they rode into town that stopping was a bad idea. Felt it in his gut.

But, oh no! His little brother had some piece of ass waiting for him and, while he didn’t begrudge helping his sibling channel some of his energy, it did make them more noticeable than he liked.  It also didn’t help that the idiot said “Hello” to every Tom, Dick and Harry he saw on the street, like he was trying to win a popularity contest.

Raditz lowered the brim of his hat further down his face and nudged his gelding into a quicker pace, hoping his brother would take the hint. The leather of the saddle creaked as he swayed in time with his mounts movements.

He heard his brother call from behind him, but he didn’t stop.  He was too busy scanning the crowd for any suspicious movements - anything that would hint that they’d been recognized. So far, nothing; however, that did not stop the cold feeling of unease that swirled in his stomach.

As his brother finally caught up to him, Raditz turned his mount towards the nearest hitching post and swung off his horse. He lovingly patted the big gelding on the neck and leaned nonchalantly on the hitching post as his brother fumbled with his stirrups and saddle bags. Apparently he had a gift for this “love of his life” girl, and wanted to present it to her as quickly as possible.

He rolled his eyes and wiped the sweat that dripped from his brow. The heat in the fucking town was unbearable. He took a moment to roll up the sleeves on his dark blue shirt to his elbows, and released the top button of the shirt from its catch. The immediate flow of air felt like sweet relief as the sun continued to beat down on him.

“While this girl’s young, Kakarot.” He grumbled, and took his hat off to fan himself with it. With every passing second, and with each person who glanced at him cock-eyed, Raditz had to quell the urge to tap the gun holstered at his side. Finally, his brother emerged from around their horses with big grin in place.

“Sorry. I just wanted to make sure everything was perfect.I think this is what Mom meant when she talked about true love.”

Kakarot was dressed similarly to himself, but his white shirt and paisley vest were pristine while Raditz’s clothes had clearly seen a few days on the road. His eyes narrowed in on his brother’s side and frowned at the lack of weapon strapped to his hip.

His brother looked down and chuckled, placing a hand behind his head and rubbing his thick hair.

"Chi-Chi doesn't like guns," As if that excuse was good enough. He then leaned of Raditz's horse, who pinned its ears back,  and whispered discreetly "and, call me Goku here. I didn't use my real name because of...well, you know."

That ever present positivity was certainly contagious, and he found himself smiling in return at "Goku's" exuberance. His smile turned into a full blown laugh when Kakarot received a face full of tail from an annoyed horse that didn't enjoy being used as a prop. The two of them stood for a moment, enjoying the small moment of levity. Without fail, Kakarot always had a way of bringing some joy into his life. His good humor never seemed to ebb.

Ever since their parents died, he had looked out for his brother and made sure they both survived. Whether it was going without food so Kakarot could eat, taking clothes off of unattended clotheslines or joining a well known gang so they could have shelter, Raditz was willing to do it.

Kakarot never seemed to fully accept the outlaw life they'd found themselves into, even speaking against their former boss when things were going to get too dicey. But, the look in the kid’s eye with each successful lawman evasion, stagecoach stickup and inevitable bar room brawl was hard to ignore. Whether he wanted to admit it or not, Kakarot loved the thrill.

Suddenly, his brother's grin disappeared as his eyes became focused to a nearby shop and Raditz turned to notice a wanted poster that was hanging haphazardly on its wall.

Raditz tensed but, sensing his brother’s unease, he placed an unconcerned smile on his face as he walked over to the flimsy piece of paper. The likeness was fairly accurate, and he looked sidewise in both directions before casually tearing the poster from its perch. He folded it a few times and placed it in his green vest pocket.  Kakarot sighed in relief, and the affable grin returned to his face. Together, they walked side by side towards the local tavern - the workplace of said “true love”.

“You should just fuck her and be done with it.”

“Not this one...this girl is special.”

“Every girl, in every town, is special. You should’ve learned that by now.”

Kakarot “hmmmm’d” in disagreement, but didn’t say anything further. He was too busy mumbling to himself and continuing to greet everyone he saw. Raditz, for his part, continued to keep a wary eye out for anything anomalous. A few times, a sudden rush of motion caught his eye, and he grabbed Kakarot by the shoulder to stop him; however, nothing happened.

They strode into the tavern - Kakarot loudly pushing the swinging doors open, and Raditz walking quietly behind. The room was dusty, smokey and full of what looked to be locals since they all turned and eyed them with immediate suspicion. No one moved to bother them, and Raditz released the breath he hadn’t realized he had been holding.

Radtiz followed his brother’s eye line to a dark beauty that was serving drinks. Her hair fell neatly around her shoulders and, compared to some of the other girls, she was dressed pretty modestly.  Raditz could see the reason why Kakarot was smitten and, based on the girl’s reaction when he called her name, the feeling was mutual.

He crossed his arms across his chest, and huffed when his brother seemed to hesitate.

“Well? We rode all the way here, Goku . Give her your fucking trinket and fuck her quick.”

As expected, Kakarot shot him a dirty look at his crude language; however, he straightened his vest and walked forward. The girl, Chi-Chi he assumed, practically beamed at his brother and sat on his lap. Seeing that his brother was in good hands, at least for the moment, Raditz strolled over to the bar and quickly ordered a shot of tequila. The clear liquid burned pleasantly down his throat as he downed the drink. Luckily, no one wanted to engage with him so he was able to continue to order drinks in peace.

A piercing squeal broke above the normal volume of the room, and Raditz swiveled on his seat to see the girl jump into his brother’s arms. Kakarot glanced his way, and then upstairs. Raditz nodded once in acknowledgement and made a hurrying motion with his hands before turning to the barkeep to ask for another shot - of bourbon this time.

A whole bottle of bourbon, some lost hands of poker and a few bowls of the house stew later the days light began to wane on the skyline. Kakarot still had not made his way down the stairs but, at this moment, the urge to take a piss was stronger than any immediate concern for his brothers safety.  Raditz grabbed his hat and walked towards the rear, intent on relieving himself in the back alley.

As he exited, he glanced around and saw that the corridor was deserted with the exception of a lone raccoon who was intent on burrowing through the garbage. Ignoring the pest, he unbuttoned his fly and pulled out his cock. A long, relieved groan bounced and echoed around him as he braced himself on a nearby wall with his forearm and let the fluids drain from his body.

As he finished, a rat raced over his boot and he kicked it away in disdain. That’s when he heard movement behind him that was too big to be a rodent. Cautiously, he tucked himself back into dusty jeans. Without making any sudden movements, his hand dropped to his side to his gun belt and he slowly turned. His eyes widened in shock as he gazed upon the figure that was standing behind him, guns drawn.

“Looks like rats know their own kind, isn’t that right Raditz?”